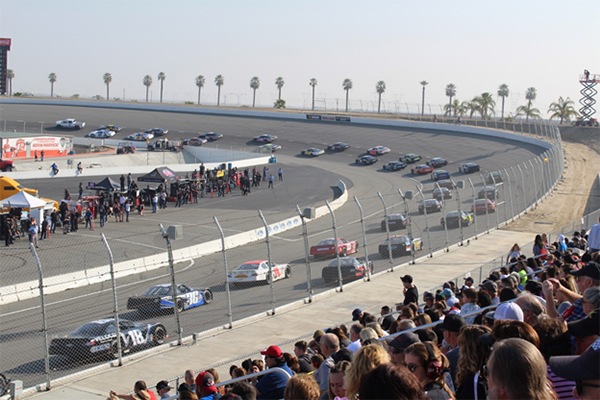 Unique Format: The “Showdown” for the Super Late Models will see 150 laps of competition, with a halfway break at lap 75. Half of the purse will be awarded at that juncture. Championship points will not be awarded until the completion of 150 laps. $5,000 will be paid to the leader at both lap 75 and 150, for a possible $10,000 payday. Single car qualifying will be followed by three 8-lap Qualifying Heat Races to set the line-up for the Feature event. The top eight cars in qualifying will draw for position in their Heat Race, then race for their opportunity to sit on the pole for the prestigious event. The remaining cars will be split into “odd’ and “even” Heat Races, to set the remainder of the field. The SPEARS Modified Series field will be set through qualifying, with a 60-lap Main Event starting the feature action at 2:00 pm (PST). The Kern County Raceway Super Stocks will also join the action and lead off Qualifying at 12:45 pm (PST).

Fans Are Back!: Fans will be allowed to purchase a “Fan Pass” at this weekend’s event at the Kern County Raceway’s Box Office. Admission Gates will open at 11:00 am (PST).
Broadcasts: For those unable to attend, the event will be aired LIVE at www.SpearsRacing.TV and on a delayed basis on MAVTV, the Motorsports Network.

Hot Two: Jeremy Doss will enter his first SPEARS Modified Series Winter Showdown event. Doss is coming off a win in the season opener, which was predicated by three previous Modified Series wins in a row. He has also scored the first two SPEARS Pro Late Model Series victories of the season, worth $22,500 combined. Doss will look for his fifth Kern County Raceway touring series victory, after securing three in the Modifieds and a single win in the SPEARS Southwest Tour Series.

Local Know-How: Bakersfield’s Buddy Shepherd was the Pole Winner in the 2018 version of the Winter Showdown. He also ran a perfect season in the track’s NASCAR Late Model Division in 2016, winning all nine feature events. He will be one to watch after commencing his SPEARS SRL Southwest Tour Series Rookie-of-the-Year effort with a fourth at the “Sunrise Ford All-Star Showdown 200”.

Cross Country Journey: Cale Kanke will participate in his Sport Mod at the Dirt Track Nationals at Bristol Motor Speedway Friday night, and then make his way west to Kern County Raceway Saturday morning to qualify for the Winter Showdown in his Super Late Model. Kanke is making the effort in hopes of running the full 2021 SRL season.

Rivals Combine: 2019 SPEARS SRL Champion Cole Moore will team up with Robbins-White Racing to participate in the 2021 Winter Showdown. Linny White and Cole Moore battled down to the last event of 2019, with Moore pulling out a slim 10-point victory in the championship. Moore will take the wheel of the Hamke (formerly Rowdy Manufacturing) Chassis that White drove to the runner-up finish in 2019. Moore will be a teammate to his father John Moore, who is racing with Robbins-White racing in 2021.

History 2015: The event originated in 2015, paying $25,000-to-win the Super Late Model event. Bubba Pollard came from Senoia, Georgia to take the inaugural victory, fending off Derek Thorn and then Dalton Sargeant to score the rich win. Thorn led a race high 145 laps of 250 that made up the event, only to come home in third. Blaine Rocha and Preston Peltier rounded out the top-five. 53-cars attended the event. Derek Thorn set Fast Time for the event. Dylan Cappello was the winner of the Modified feature, over the 16 entrants.

History 2016: The second running of the Winter Showdown found 43 cars in the pit area. Bubba Pollard was once again the victor, earning $25,000, after Derek Thorn broke a rear end while leading on lap 72. David Mayhew and Gracin Raz took turns at the front before Pollard pulled away for the win. Raz and teammate, Noah Gragson made news after colliding, eliminating Raz. Parker Stevens finished second with Jeremy Doss, Tyler Tanner and a recovering Noah Gragson rounding out the top-five. Derek Thorn once again set fast time over the field. Ryan Partridge scored the victory in the 80-lap Modified feature over the 25-car field. Austin Barnes was second followed by Tayler Miinch, Travis Thirkettle and Matthew Hicks.

History 2017: After coming close in 2015 and sporting the fastest car in 2016, Derek Thorn was finally able to score his first Winter Showdown victory, this one was worth $30,000. Thorn won in dominating fashion, leading all 250 laps to score the victory over Donnie Wilson, Kyle Busch, Erik Jones and Willie Allen. Thorn set Fast Time for the third consecutive event, over a 47-car entry. For Thorn, it was a breakthrough event, a long time in the making.

“Finally getting that first Winter Showdown win was a huge hurdle”, Thorn recalled. “We had come so close at both the Summer and Winter Showdowns, and even the (Snowball) Derby and All American 400, but we had yet to seal the deal on a big event. It was a relief to finally have that “W”. So much time, preparation and resources go into a race, even more so at the big shows. We’ve been struggling to have any luck at the big events, but we will keep doing what we’ve been doing and make the most of each event. I’m just super fortunate to have had so many once in a lifetime opportunities, to run these big shows with such a great team.”

In the Modifieds, Austin Barnes scored the victory over a 22-car field. He was followed by Scott Winters, Ryan Partridge, Jason Irwin and Travis Thirkettle.

History 2018: For the first time in Winter Showdown history, Derek Thorn did not set the Fast Time for the event. Fellow Bakersfield, CA competitor Buddy Shepherd did the honors garnering the extra $2,000 bonus. Two-time NASCAR Cup Series Champion Kyle Busch had the last laugh, however, scoring the $30,000 win over the 48-car field. Thorn led 72 laps, but faded on the long runs, allowing Busch to lead the other 228 laps in the now 300 lap event. Buddy Shepherd won a thrilling battle over Daniel Hemric in the closing laps to finish as the runner-up. Hemric was third followed by Ty Majeski and Noah Gragson. The Modified were not scheduled for the 2018 edition.

History 2019: With a threatening weather forecast throughout the weekend, last minute dropouts cut the entry to 38 Super Late Models, with 37 surviving to start the 300-lap event. With rain interrupting Friday’s Qualifying Day, the line-up was set off of combined practice sessions. Jeremy Doss earned the pole and led the most laps in the event. Doss battled with Preston Peltier and Ty Majeski for the win, before the race was called due to a power outage in the area. Ironically, only a few minutes after Majeski was declared the winner, the power was restored. Only 177 of 300 laps were completed. Derek Thorn finished in the runner-up position followed by Preston Peltier, Willie Allen and Ryan Reed. Many of the top competitors were taken out in a huge lap 115 restart incident, that involved nearly half the field.

History 2020: The event was not held in 2020, after Covid-19 restrictions hit only a week before the scheduled race date.