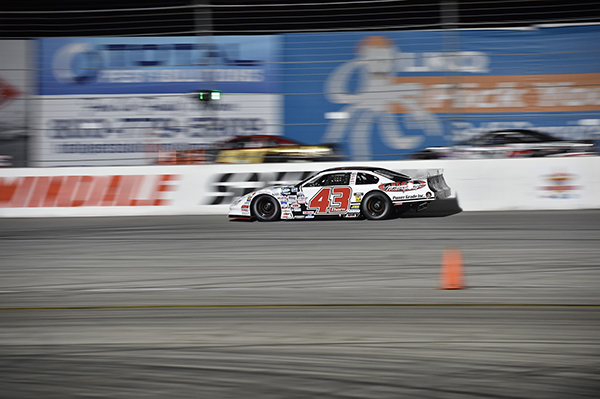 (February 1, 2021 from Kevin Peters) – Entering the 2021 “Sunrise Ford All-Star Showdown presented by the West Coast Stock Car Hall of Fame”, there will be a record number of competitors vying for the $30,000 win at Irwindale Speedway on February 6th. Every driver looking to find Victory Lane will have their eyes on one competitor in particular. That driver holds the series record for championships (5), wins (49), fast times (60), top-five’s (74), top-10’s (82), money won ($322,230) and a plethora of other categories. He was voted one of the top-10 short track drivers of the decade by Speed51.com. He is a threat to win at every event he attends. His name is Derek Thorn. Photo by Sal Sigala, Jr.

Thorn will be seeking SRL victory number 50, when he heads to Irwindale Speedway on the 6th. He will also be seeking the largest payday in series history at $30,000, after setting the mark of $25,000 in last year’s event. The driver from Bakersfield, CA once struggled to find Victory Lane at the progressively banked ½-mile oval, going zero for his first six events, and then another four events before he scored his next triumph. He now has five victories at the facility, trailing only the six by M.K. Kanke, in Super Late Model Touring series history.

Outside of SPEARS SRL Southwest Tour Series competition, Thorn has experienced a substantial share of misfortune and bad luck, but he has still managed to bring back his share of monster victories. He was the winner of the 2017 “Winter Showdown” worth $30,000, he won the “Fall Open Comp Senator’s Cup” at the Bullring at LVMS worth $15,000, he picked up $10,000 winning the “Snowflake 100” at 5 Flags Speedway in 2019. Thorn also scored a big win at Pike Peaks International Raceway, leaving with $15,000 in the “Spears Manufacturing 100”. He has multiple Pro Late Model wins at both 5 Flags Speedway (FL) and New Smyrna Speedway (FL).

In addition, Thorn has shown his prowess in qualifying putting himself on the pole in the last two Snowball Derby’s, as well as the 2020 “Snowflake 100”. He has three Winter Showdown poles as well as two Summer Showdown poles at Evergreen Speedway. He qualified first in the Fall Senator’s Cup twice, and has seven poles in the NASCAR K&N Pro Series West, which complement his two championships in three seasons.

“It’s great to see a strong field of cars expected for the All-Star Showdown”, Thorn stated. “It’s good to see the continuing growth of Super Late Model racing here on the West Coast. A lot of people put in a lot of time, money, and resources to make these races come together, so thanks to them for all they are doing for West Coast racing.”

After his near victory in last December’s Snowball Derby, and his dominant performance at the All American 400, before being turned while leading, Thorn will put those disappointments behind him. He and his team will prepare as they do for each event they attend, Thorn explained.

“We will continue to prepare like we always have and bring the best equipment possible. All we can do is look forward, and try to make the most of each race we enter. Racing is a very humbling sport. We are looking forward to getting the 2021 season started.”

With all the success that Thorn has achieved in the SPEARS Southwest Tour Series and beyond, the veteran driver has raced against the best Super Late Model drivers in the country. He will be taking on another stellar field next weekend as 46 cars are on the pre-entry list. When it comes to the competition he will face in these big events, however, Thorn doesn’t focus on any particular competitor in the field. He is just looking forward to getting back to work and putting on a good show.

“I’m just looking forward to getting back on the track”, Thorn said. “Hopefully, we can put on a great show and get people excited about tuning in to watch a great race.”

In 2020, Thorn had the strongest season of his career, as the driver of the Campbell Motorsports Toyota continues to improve their program. He won eight of the nine SRL events in 2020 and dominated a majority of two of the biggest Super Late Model races in the country. He swept qualifying on Snowball Derby weekend and had a career best finish of second in the Derby itself. He finished fourth in the Snowflake 100 after winning the event in 2019. He led a race leading 74 laps. With his 2020 season in the books, Thorn is still motivated to better their program and improve upon 2020.

“Byron and Carol, Mike and Vicki and the entire team are a big family. We’ve been working together for almost 10 years. We want to compete against the best teams at the biggest races. We will continue to do what we can to elevate our program, be as competitive as we possibly can be, and take it a race at a time.”

Having attended big events throughout the country, Thorn has a unique perspective of what it takes to have a successful event, at least from the competition side. When asked about the All-Star Showdown Weekend, and it’s return over the last two seasons, Thorn shared his opinion on the event.

“It takes so much to make these events come together”, the former Lakeport, CA resident said. “I don’t really know what can be done to make the event bigger. COVID-19 definitely makes it tough right now, for everyone involved. Hopefully in the future, when things are back too normal, more teams from around the country can come take part, and fans can be back in the stands rooting for their favorite teams.”

To achieve all that Thorn has, throughout his career, it takes a talented supporting cast. Thorn possesses such a cast, and he is thankful for the support.

With the help of Bob Bruncati and the West Coast Stock Car Hall of Fame, the 2021 “Sunrise Ford All-Star Showdown 200” will pay $30,000 to the winner of the 200-lap feature event at Irwindale Speedway. The Spears Pro Late Models presented by Sigma Performance Services, as well as the SPEARS Modified Series will join the action, racing for $15,000 and $5,000, respectively. An optional Test Day is slated for Thursday, with the official Practice Day getting underway on Friday.

For those unable to attend, the event will be shown live at www.SpearsRacing.TV and on a delayed basis on MAVTV.