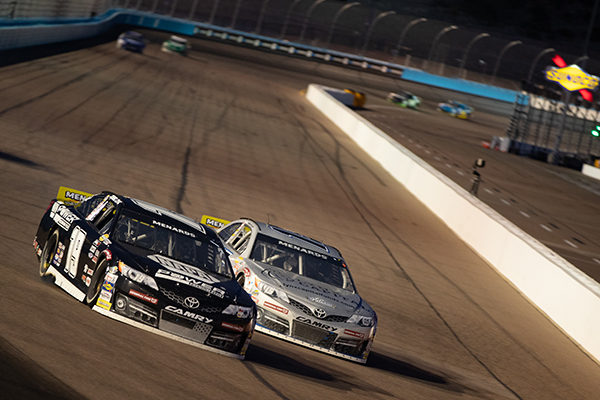 (November 4, 2020 from series and team reports) – Fifteen-year-old Jesse Love looks to clinch the ARCA Menards Series West championship when the series wraps up its season at Phoenix Raceway on Saturday. Photo by Diego Alvarado.

Love, who has piloted Bill McAnally Racing’s No. 19 NAPA Power Premium Plus Toyota Camry to three wins this season, has a 14-point advantage in the championship standings ahead of Bakersfield’s Blaine Perkins in the Sunrise Ford #9 Ford Fusion.

Love can clinch the title by finishing eighth or better in the Arizona Lottery 100. Bill McAnally Racing has enjoyed five victories at Phoenix over the years, giving the rookie ample opportunity to wrap up the championship on Saturday.

His BMR teammates Gio Scelzi and Gracie Trotter are wrapping up their rookie seasons in the series as well and all three have been to Victory Lane this year. A fourth BMR entry at Phoenix will be driven by NASCAR Euro Series competitor Alex Sedgwick, who will be making his first start in the United States.

Sedgwick is one of many big names and new faces competing among the 27 entries. ENTRY LIST

Venturini Motorsports will field a trio of Toyota Camrys with Drew Dollar, Corey Heim, and Keith Rocco scheduled to compete. Rocco will be making his ARCA Menards Series debut after his originally scheduled race at New Hampshire Motor Speedway was cancelled.

Ty Gibbs returns as the defending winner of the event while 2020 ARCA Menards Series East champion Sam Mayer looks to improve on a 20th place finish with the ARCA Menards Series in the spring at the one-mile oval. Taylor Gray is the most recent winner in the West, grabbing the round at Kern County and aiming for two in a row at Phoenix.

Other added entries include a father and son combined effort with David and Todd Gilliland. Each Gilliland has one West victory at Phoenix. Loomis, Calif.’s Jack Wood will make his final start for his family Velocity Racing team before taking the controls of the defending championship winning No.21 for GMS Racing in the 2021 ARCA Menards Series East.

Trotter and Scelzi are in a tight battle for third in the championship standings. Trotter is currently in third – with a slim four-point margin over Scelzi, driver of the No. 16 NAPA AUTO PARTS/Curb Records Toyota Camry. If she maintains the third spot in points, Trotter would match the record for the highest ranking by a female driver in the final standings in ARCA West.

Sedgwick of Brighton, England, will be driving the No. 12 BELFOR Property Restoration Toyota Camry – as he makes his debut in the ARCA Menards Series West. Sedgwick competed in the NASCAR Euro Series during the 2018 and 2019 seasons.

Saturday’s ARCA West race, the final event on this year’s 11-race schedule, is part of the big NASCAR championship weekend at Phoenix Raceway. The race will be live on TrackPass on NBC Sports Gold at 11 a.m. Pacific Time before a tape delayed airing on NBCSN on Nov. 11 at 3 p.m. Pacific.