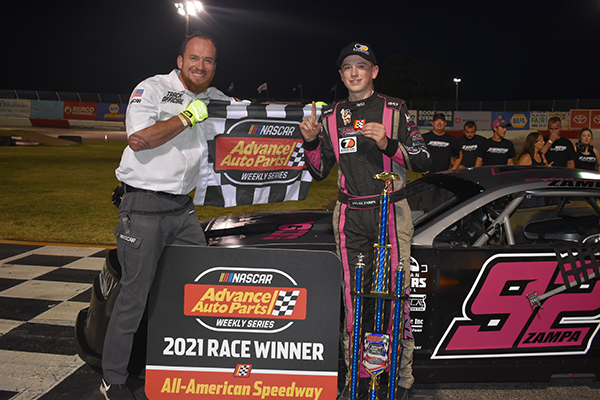 ROSEVILLE, Calif. (June 13, 2021) – Colorado’s Cassidy Hinds and Napa’s Dylan Zampa split the Berco Redwood NASCAR Late Model features at All American Speedway on Saturday, giving each driver their first Late Model triumph at the one-third mile in Roseville. Their wins were part of an eight main event card at the speedway powered by Roseville Toyota. Photo by Don Thompson

Hinds’ win was a come-from-behind tale during a tumultuous opening contest. A ten-car invert placed Roseville’s Lance Halm on the pole position and the caution flew on lap three for Aidan Daniels of Fort Bragg spinning on the backstretch. Hinds was part of a three-car spin in turns one and two on lap seven which involved Colorado’s Holly Clark and Fort Bragg’s Kylie Daniels. All three restarted at the tail of the field. The caution flew again on lap nine when Hinds spun for a second time.

Halm slowed from the lead in turn four on lap 15, surrendering the top position to Zampa. The tenth starting Zampa paced the field through several cautions including an incident with Clark and Calvin Hegje on lap 20. Michael Mitchell collided with incoming points leader John Moore of Granite Bay on lap 22, bringing out the caution when Moore pounded the front stretch wall. Both Moore and second in points Aidan Daniels failed to continue.

A red flag fell on lap 32 for JJ Ferguson hitting the wall in turn two head on. He was uninjured. Zampa’s car would not fire after the red flag was lifted, handing the lead to Hinds. Hinds went back-and-forth with Loomis’ Chris Scribner before wrestling the lead away on the inside on the final lap, winning her first NASCAR Late Model feature. Auburn’s Thomas Martin finished third ahead of Kylie Daniels and Mitchell.

Zampa earned the pole for the second feature after an eight-car invert. A shuffle of the order allowed Michael Mitchell to use the outside to lead lap one, before Zampa led lap two. Both Martin and Japanese driver Takuya Okada passed Mitchell for third and fourth. Hinds then jumped up to fourth by lap seven.

The leaders encountered lapped traffic by the 15th lap. Hegje and Scribner collided in turn four on lap 16, with a spinning Scribner getting hit head-on by Lane Anderson to end Scribner’s race. Anderson and Aidan Daniels then had an incident in turn one for a caution, erasing a 1.7 second lead that Zampa had accumulated over the field. Zampa held the lead over a pair of restarts, including for contact between Moore and Hinds that relegated both to the rear of the field. Zampa topped Martin by 1.899 seconds followed by Okada, Halm, and Clark the top-five.

Eureka’s Brandon White made his first start in the Jaws Gear & Axle Modifieds count as he led all 25-laps for the victory. White quickly nabbed the lead after starting fourth and never relinquished it in the NASCAR feature. 2020 champion Jason Philpot of Sacramento finished second followed 2021 points leader Eric Price, Jr. of Rio Linda, Rocklin’s Tyler Wentworth, and North Highlands’ Rick Andersen as the top-five finishers.

Roseville’s Nathan Cleaver won his first F4 feature in a 25-lap main event. 2020 champion Ray Molina of Roseville drove fourth to first on the opening circuit while behind them Lincoln’s Brandon Frantz and Rocklin’s John Sproule got together in turn three. They were able to rejoint the race with the main event staying under green.

Cleaver tracked down Molina to take the lead on the inside on lap four. Tenth starting Matthew Fuhs charged to third by lap six then passed Molina for second. Fuhs looked outside Cleaver for the lead but could not complete the pass. The top-four ran closely together until a caution on lap 17 for fourth place Stephen Crook stopping on the front stretch. Cleaver led the final eight laps for his first F4 win over Fuhs, Molina, Dennis Crook, and Sproule.

Lucas Burton avoided a late race melee to win the Mini Cup/Bando feature. Burton led only the final lap to win his first career event. Anthony Bean of Lincoln made quick work to go fifth to first on lap one. Rookie Dayton Broyles of Auburn spun on lap two but continued. He then collided with Bean while being lapped, dropping Bean out of the lead. The race remained under green until 2020 champion Bella Thomsen of El Dorado Hills slowed on the backstretch on lap six.

An unpredictable race saw a pair of spins for 2021 points leader Colton Nelson of Auburn. Bean and fellow Lincoln-based rookie Joseph Elf battled for the lead on the final restart. Bean went to clear Elf into turn one and they collided, bringing out the yellow-checkered flag. Third place Burton was declared the winner over Nelson, Broyles, Bean, and Elf.

Josh Whitfield won his fourth Riebes Auto Parts Super Stock feature of the season as he overcame the ten-car invert to win. Roseville’s Jeremy Fritts led the opening lap from the outside of Gary Eisenhour, who led lap two. Fritts then claimed the top spot back on lap three.

Fritts raced side-by-side with Tim Walters on a lap eight restart before Fritts slid exiting turn four. 2020 champion Andrew Peeler knifed underneath to lead lap 11. Whitfield followed and pounced, moving underneath Peeler on the backstretch to lead lap 12. A caution fell on lap 25 when Brandon White and Walters got together in turn one. Whitfield maintained the lead over the final five circuits, topping Peeler, Roseville’s Roy Smith, Roseville’s Phil Wilkins, and Fritts.

Alan Bridgman won his second consecutive Riebes Auto Parts Trailer Bash for $1,000 to win. Bridgman nearly lost his trailer, racing several laps with the trailer on its side. The trailer eventually gave way on the cool down lap after the victory as well!