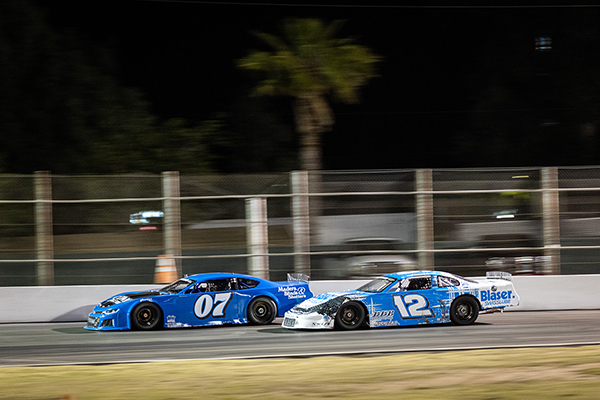 MADERA, CALIFORNIA (May 21, 2022) – Vancouver, Wash.’s Jadan Walbridge outlasted Las Vegas’ Kyle Keller in the rematch from their classic on April 30 at Madera Speedway, with Walbridge taking the Military Tribute Night round four for the Lunkerdaddy Pro Late Models on Saturday night. Each had to overcome challenges to emerge as the top-two contenders to win the 80-lap contest, then engaged in an exciting battle to the conclusion. Photos by Ethan Smith

Walbridge and Keller had their nights entangled from the beginning, when they tied for second in time trials behind 15-year-old Sean Hingorani of Newport Beach. The redraw placed 2021 51FIFTY Jr. Late Model champion Brody Armtrout of Smartsville on the pole while Keller drew third, Hingorani eighth, and Walbridge a distant tenth.

Amrtrout raced side-by-side with Howard Holden of Clovis at the start before a caution on lap six for Jason Aguirre slowing with a flat tire and suspension damage.

Keller took over the lead on lap seven but Armtrout battled back to lead lap eight. Their battle boiled over on lap nine entering turn three, when they collided and Keller spun. Both were relegated to restarting at the rear of the field. The incident thrust Holden into the lead with company from 14-year-old Ethan Nascimento. Holden used the outside line to lead in a side-by-side race while Walbridge was up to the top-five by lap 21. Armtrout and Glen Cook tangled for the 12th position for the next caution on lap 28.

Holden picked the outside on the restart and raced alongside Nascimento in a prolonged battle. The leaders raced two-by-two with Nascimento driving on the inside to lead lap 32. Bakersfield’s Kercie Jung closed in on the leaders from fifth as well. Cook spun into the turn one wall to end his night on lap 43. The incident led into the lap 50 break seven laps early with Nascimento leading the field.

On the restart, apparent fluid from Shelden Cooper’s car sparked a multi-car incident in turn one that involved Nascimento spinning out of the lead. He was then tagged by Rick Thompson in the melee. Both Nascimento and Thompson were able to continue in the race, however. With Nascimento restarting at the back, Walbridge inherited the lead and was challenged by Keller. Their battle was briefly halted on lap 55 when Hingorani and Nascimento collided for a spin in turn four on lap 55.

The race for the win came to a head over the final 25 laps between Walbridge and Keller. Walbridge picked the outside and held the lead before Keller edged forward on the inside. Keller led lap 62 by just .001 seconds before Walbridge did the same on lap 63. Keller led again on lap 64 but Walbridge fought back on lap 68. Jung and Eagle, Idaho’s Jacob Smith engaged in a furious side-by-side affair for third simultaneously as well.

Walbridge cleared Keller on lap 74 and led him by a car length in a narrow drive across the finish line. Jung topped Smith for third with multi-time champion Matt Erickson overcoming being two laps down earlier in the event to finish fifth.

Hingorani challenged Mitchell by lap eight for the top spot. Colorado’s Brody Moore had an incident on lap 13 that relegated him to the back of the field. On the restart, Hingorani used the outside to drive into the lead on Mitchell. Mitchell stayed in tow for several laps before Hingorani had the lead in hand on lap 19.

Monty Tipton went up in smoke in turn four to bring out the yellow flag on lap 29, then Jody Moen of Idaho spun on the ensuing restart. Moore and points leader Robbie Kennealy of Madera battled hard for fifth approaching the lap 40 break. Hingorani led Mitchell, Nascimento, Kleyn, and Kennealy at the lap 40 stoppage for adjustments and MAVTV interviews.

Mitchell suffered on the restart on the outside, being overhauled by Nascimento and facing a challenge from Kleyn. Mitchell drove around the outside of Kleyn in turn two to keep the third spot on lap 45. Hingorani led the rest of the way over Nascimento, Mitchell, Kleyn, and Kennealy at the finish.