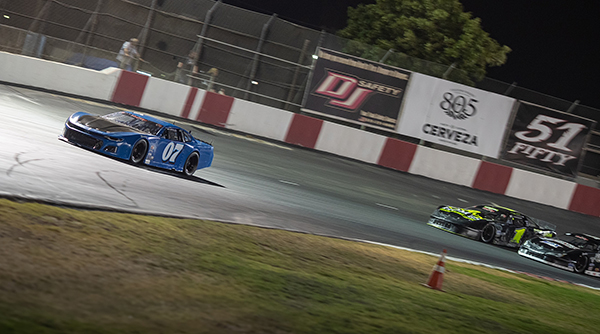 MADERA, CALIF. (August 21, 2021) – Vancouver, Wash.’s Jadan Walbridge became the first repeat winner of 2021 in the Nut Up Pro Late Models at Madera Speedway, taking round seven of the MAVTV-televised series in a $2,000-to-win 80-lap contest. The 16-year-old 51FIFTY Jr. Late Model graduate extended his points lead in the process after leading wire-to-wire. Photo by Joshua Rodriguez

Walbridge took several months off racing in the second half of 2020 before returning this season to contend for the championship. He attributed the off time to fueling his success.

“To be the first repeat winner and we’re leading the points, man I’m hungrier than ever. I cannot thank these guys enough and the lord for all these blessings. Racing is definitely a humbling sport and anything can happen. Have to thank my guys and my grandma and grandpa for making this possible,” Walbridge said.

Walbridge drove ahead with the lead the start, going around the outside of Texan Barrett Polhemus in his Pro Late Model debut. Polhemus drifted backwards on the inside line, with a battle for second developing between 2021 race winner Tyler Herzog and Jason Aguirre. Herzog won the side-by-side battle, giving fast-time qualifier Kyle Keller of Las Vegas an opening to go inside Aguirre for third. The duel allowed ninth-starting Matt Erickson to enter the frame, diving inside Aguirre for third. A string of lead cars ran together on the top line before a caution fell for Rick Thompson spinning on the backstretch on lap 33.

Walbridge maintained the lead while Erickson went past Herzog for second on the outside. Keller and Aguirre backpedaled outside the top-five from the bottom of the track. Walbridge led Erickson, Herzog, Polhemus and tenth starting Colby Potts at the lap-50 break.

Walbridge emerged from the break with the lead, while the drivers behind him once again lined up on the top. Polhemus spun from third in turn three for a caution lap 65. Aguirre fell out of the event on lap 71 as well to significantly derail his championship hopes. Walbridge grabbed the checkered flag followed by Herzog, Erickson, Keller, and Brody Armtrout of Smartsville.

Armtrout had an outstanding night in the 51FIFTY Jr. Late Model Series, winning his fourth consecutive race for the drivers ages 10-16 years old. Barrett Polhemus started the 70-lap affair on the pole and took the lead on the inside, bringing fast-time qualifier Ethan Nascimento with him to second place. Outside pole sitter Kenna Mitchell of Loomis fell to fifth before finding a spot on the bottom.

Second place went to Armtrout on lap 13 as he passed Nascimento. Holly Clark of Colorado advanced up to fourth position after starting seventh, while incoming points leader Jacob Smith of Eagle, ID ran as low as ninth. Polhemus led Armtrout, Nascimento, Clark, and Mitchell at the conclusion of the opening 40-lap segment.

Following the on-track break for adjustments and MAVTV interviews, Armtrout took his shot. Polhemus picked the inside with Armtrout promptly driving past him on the outside in turns one and two to lead lap 41. The caution fell on lap 49 when Smith and Mitchell got together in turn two, relegating both to the tail end of the lead lap. Smith then collided with Clark in turn one on lap 54, with Clark spinning and getting hit by Washington’s Kasey Kleyn. Smith again was placed at the rear.

Polhemus and Armtrout exchanged the lead, with Polhemus leading lap 55 before they statistically tied at a .000 second split on lap 56. Armtrout then seized the lead on lap 57. Brody Moore spun while racing on the outside of Nascimento for third for the next caution. Mitchell slowed to avoid and was tagged from behind by Smith, causing heavy front-end damage for Smith.

Polhemus retook the lead by .042 seconds on lap 58 but the move was nullified when Clark spun on the front stretch. Armtrout restarted as the leader but gave Polhemus the outside. Polhemus led lap 59 by just .068 seconds. Polhemus was then penalized for jumping the lap 58 restart, forcing him to pull over and fall to the rear. The final caution fell on lap 62 when Moore and Hailey Liles collided, with Smith then nosing into Liles in turn two for heavy contact. Armtrout led the final eight laps while Bakersfield’s Kercie Jung passed Nascimento for second on the backstretch on lap 64. Nascimento finished third with Clark in fourth. Smith surprised with a fifth-place finish in a wounded car to maintain his points lead.

Madera’s Joey Kennealy won his second Bandolero feature of the year in a cross-over filled affair with points leader Logan Chambers of Bakersfield. Kennealy led the first seven laps before Chambers led lap eight. Chambers lost the lead into turn one, turned underneath Kennealy and crossed him over to lead lap nine.

Madera Speedway’s next event is on August 28 with the MAVTV-televised California Dream 100 for Pro Mini Stocks. CVMS Mini Stock Invasion, Madera Late Models, Madera Hobby Stocks, and MSTs/Toyota Sedans will also be competing. Tickets will be available at www.RaceMadera.com or at the gate.

Madera Racing on MAVTV airs Monday nights at 4:00pm Pacific. The third round of the Nut Up Pro Late Models airs on Monday August 30th!