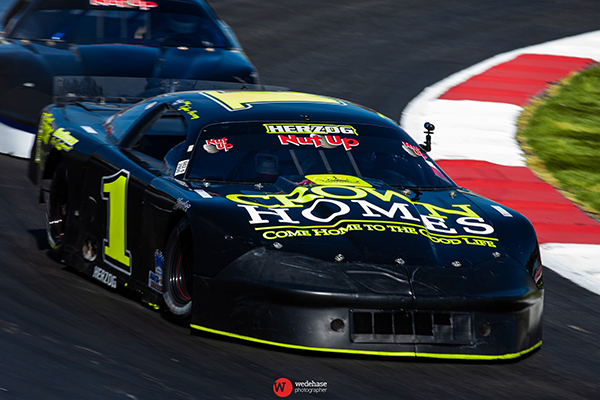 “I’m just blessed in so many ways. God blesses me every day,” Herzog said. “We’ll just take (the championship) as it comes. We have a really good long run car. Just got to work on the short run speed. We’ll be up there.”

Vancouver, Wash.’s Jadan Walbridge paced qualifying then drew the five pill for the starting lineup. Former Ron Spencer race winner Matt Erickson started on the pole position alongside Jason Aguirre. Aguirre used the outside to take the lead for the opening lap. Walbridge worked his way to the inside of Erickson to take second on lap five. Walbridge then closed on Aguirre for the lead.

Tyler Herzog passed Erickson for third on lap 17, then Walbridge passed Aguirre on the inside for the top spot on lap 18. Herzog followed suit for second on lap 22 in lapped traffic, taking the second position by lap 24. Erickson attempted to grab third from Aguirre as well in a long side-by-side battle for the position. 2019 champion and current points leader Austin Herzog entered the fold, then used the inside to pass both Aguirre and Erickson for third before the lap 50 break. Walbridge led Tyler Herzog, Austin Herzog, Erickson, and Aguirre after the first 50-laps of competition that went caution-free.

After the break for MAVTV interviews and adjustments, racing action continued. Walbridge picked the inside with Tyler Herzog capitalizing. Herzog used a big run on the backstretch to lead lap 51. The first caution ended up being a red flag on the following lap. Carl Pearce bounced off the front stretch wall, hooking Rick Thompson into the turn one gate. Thompson was fortunately uninjured.

Tyler and Austin Herzog both went to the outside of Walbridge on the restart before the caution fell on lap 53 for Erickson stopped in turn two. Erickson rejoined the race after a brief pit stop. Tyler Herzog restarted outside cousin Austin on the restart and drove ahead, never relinquishing the lead. Aguirre used the outside to take second, dropping Austin Herzog into a battle with Walbridge. Austin drove clear of Walbridge but never gained ground on the top two. Tyler Herzog grabbed victory over Aguirre, Austin Herzog, Walbridge, and Las Vegas’ Kyle Keller.

Brody Armtrout of Smartsville won his second consecutive 51FIFTY Jr. Late Model race against the crop of 10-16 year old drivers in a 70-lap feature. Jacob Smith of Eagle, Idaho was the incoming points leader and led time trials. He started alongside Colorado Springs’ Holly Clark, who led her first laps of the season from the pole. Smith drifted back to fourth on the outside line in the early stages.

The top four cars lined up at the front of the field before Ethan Nascimento made his move. Nascimento took over the lead on lap 13. Clark fell back from the outside line as well before caution flew for Bakersfield’s Kale McClenny with significant contact to the front stretch wall which ended his race.

On the restart, Armtrout challenged Nascimento for the lead with Smith in tow. Kenna Mitchell spun in turn two for a caution on lap 22. A multi-car crash followed when Jeffrey Erickson of Arizona and Clark traded contact, with Clark spinning on the front stretch. Texan Barrett Polhemus nosed into Clark into turn one trying to avoid her spinning car. Both cars were able to continue.

Armtrout took over the lead on lap 29 with Smith moving past Nascimento for second. Armtrout led Smith, Nascimento, Polhemus, and Washington’s Kasey Kleyn as the top-five on the scheduled lap 40 break. Nascimento emerged from the break with a strong run on the inside of Smith to take the second position. Polhemus was involved in two separate incidents in the closing laps of the event, setting up a three-lap shootout. Nascimento retook second from Smith before a caution for Clark spinning backwards into the turn one wall.

A big crash ended the race on the final lap under yellow checkered conditions. Moore and Kleyn collided in turn four, with Kleyn spinning into the path of Bakersfield’s Kercie Jung. They collided on the front stretch with Jung’s car going airborne before landing on all fours. All the drivers involved were uninjured. Armtrout led across the stripe over Nascimento, Smith, Erickson, and Mitchell.

Logan Chambers won an entertaining battle with Joey Kennealy to take the Bandolero portion of the Mini Cup vs. Bandolero feature. Caden Cordova won a back-and-forth battle with Konner Karsten for third as well. Las Vegas’ Kellen Keller won the Mini Cup race within a race over Sam Wedehase.

Madera Racing on MAVTV airs Monday nights at 4:00pm Pacific with new 2020 episodes now airing. Monday July 5 will be the first airing of the 2021 season with the Nut Up Pro Late Model season opener.