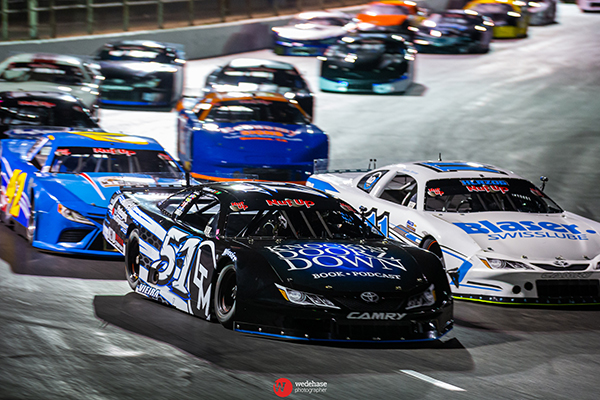 MADERA, CALIF. (April 21, 2021) – A big night of MAVTV-televised stock car action with fans in the grandstands is set for this Saturday night at Madera Speedway with the Nut Up Pro Late Models, 51FIFTY Jr. Late Models, and Mini Cups vs. Bandoleros ready to race. The third round of competition for each series will be joined by the Legends of the Pacific with their second Madera Speedway stop of the 2021 season. Photo by Jason Wedehase

Ticket information can be found at: http://racemadera.com/ticket-info.html with online sales available through MyRacePass. Race fans who bring a canned food item for the Madera County Food Bank will receive a ticket for a free soft drink in a partnership between Madera Speedway, Dylan Zampa, and Kulwicki Driver Development Program.

Zampa was part of an all-51FIFTY Jr. Late Model graduate top-six in the most recent Nut Up Pro Late Model round, with Eric Nascimento, Jr. earning his first win in the series. 2019 Pro Late Model champion Austin Herzog of Clovis – a six-time Jr. winner – finished second ahead of Napa’s Zampa, Jay Juleson, and Phoenix’s Bradley Erickson.

After two roller coaster nights of action, the Herzog family finds themselves atop the championship with Austin leading cousin Tyler by just one marker. Each driver has a second-place finish and a “mulligan” on their 2021 resume, with Austin’s six qualifying points and seven halfway points the deciding factor thus far.

Jason Aguirre of Atwater won last weekend’s non-televised Madera Late Model feature and rides that momentum into Saturday night from third in the standings. Glen Cook and Bradley Erickson round out the top-five. The Nut Up Pro Late Models compete for 80-laps with a 50-lap opening segment followed by a break for MAVTV interviews and adjustments. The winner is determined over a 30-lap final segment.

Like the Pro Late Models, the 51FIFTY Jr. Late Models has not had a repeat winner this year. Entering the season without any previous race winners in the pack, a hungry group of 10 to 16 year-old drivers has battled with Bakersfield’s Kale McClenny winning round one before Idaho’s Jacob Smith won round two.

Texan Barrett Polhemus has finished second in each of his first two career starts, propelling himself to an eleven point lead in the championship. 2019 Roseville champion Brody Armtrout of Smartsville has a pair of top-five finishes as does Colorado’s Brody Moore. Smith ranks fourth ahead of a snake bitten Ethan Nascimento. Nascimento has earned five qualifying points but has not finished in the top-five at the halfway of either race due to early race troubles. Nascimento will look to mount a serious charge in the third race of the year. Kercie Jung of Bakersfield has won fast-time in each event but is still in search of a top-five finish this year.

Saturday’s contest is another 70-lap affair with a 40-lap opening before the Mission Racing Style Tortilla Chips halfway break. The final 30-laps of the race follow.

The touring Legends of the Pacific is one of the comeback stories of 2021 as far as car counts are concerned, attracting 24 of the 5/8ths scale vehicles to Madera on March 27th. Luis Tyrrell of Brisbane scored the win over Bakersfield’s Josh Ayers and Foryst Souza of Ceres. A 35-lap feature is on tap for the Legends on Saturday.

Bakersfield’s Logan Chambers is two-for-two in the Bandolero portion of their combined series with the Mini Cups at Madera Speedway. Chambers leads the youngest drivers at Madera with a ten-point advantage over fellow Bakersfield driver Caden Cordova. Joey Kennealy recently relocated to Madera and ranks third. Sam Wedehase of Kingsburg and Las Vegas’ Kellen Keller have split the Mini Cup competition in 2021. Wedehase leads Keller by four points heading into Saturday’s 30-lap race.

Action gets underway on Friday with practice from 5pm until 8:45pm with pit gates opening at 3pm. On Saturday, pit gates open at 11:00am with practice at 1:00pm. Qualifying hits the track at 3:05pm followed by heat races. Short Track TV goes live at 5:40pm with all four features to follow.