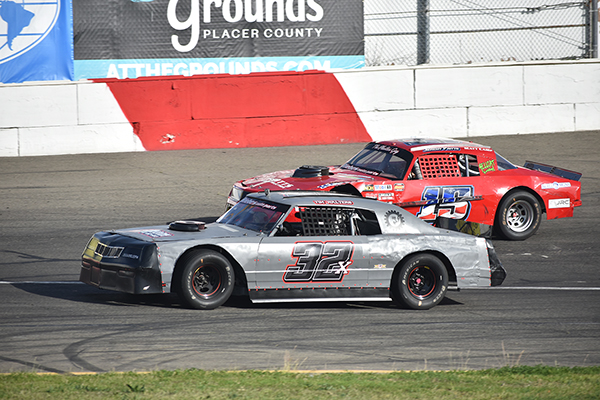 ROSEVILLE, Calif. (May 6, 2022) – Racing excitement continues May 14 with Armed Forces Night at All American Speedway powered by Roseville Toyota featuring the NASCAR Advance Auto Parts Weekly Series and the second Riebes Auto Parts Trailer Bash of the season. Active-duty military and veterans alike will be honored during opening ceremonies. The first 100 through the gates will also receive a special merchandise “swag bag” courtesy of Bill McAnally Racing Promotions and its sponsors. Photo by Don Thompson

Grandstands open at 5pm followed by heat races at 5:15pm. Opening ceremonies are at 6pm with main events to follow. The Riebes Auto Parts Trailer Bash closes the show! Tickets for Armed Forces Night are available online at www.AllAmericanSpeedway.com All seats are general admission, priced at $20 for adults, juniors ages 6-12 are $15, and kids 5 & under are FREE!

The first round for the Riebes Auto Parts Trailer Bash on April 9 saw a growing field of drivers trying different approaches to victory with different styles of vehicles. Dillon Petersen avoided the chaos in his green Chevrolet HHR to go from the back to the front in 15-laps for the $1,000 win. A $250 Master of Disaster prize is also offered along with $250 for the best-looking trailer as voted by the fans! Drivers must cross the finish line first and survive with their trailer attached to be the winner of the race. No car-on-car contact is allowed, but drivers are encouraged to slam into each other’s trailers in a battle for supremacy.

18-year-old Dylan Zampa of Napa is off to one of the most dominant starts in All American Speedway history by winning the first three rounds of the NASCAR Berco Redwood Late Models. Zampa topped a 20-car field on March 5 then swept the April 9 twins during the Spring Smash. His second win on April 9 came after starting eighth due to the invert. He drove into first within just eight laps and never relented. The Kulwicki Driver Development Program member leads Loomis’ Michael Mitchell by 10-points followed by 2021 champion John Moore of Granite Bay, Auburn’s Thomas Martin, and Fort Bragg’s Aidan Daniels. Twin 35-lap features are on tap for Armed Forces Night for local, state, regional, and national points.

Rick Andersen of North Highlands opened the Foothills Tow Modified division season with his first win in several seasons. Foothills Tow will present the division beginning with the upcoming 30-lap feature. They have been in business for 24 years with locations in Loomis, Colfax, and South Lake Tahoe with fast and professional service.

The Riebes Auto Parts Super Stocks also have a 30-lap feature on deck with Roseville’s Josh Whitfield atop the championship with a two-for-two start to his title defense. Phil Wilkins of Roseville, Terry Thomas, Jr. of Antelope, the driving team of Gary Eisenhour and Chris Lambert, and Galt’s Larry Thornhill round out the top-five.

Perhaps the greatest battles have come in the resurgent F4 division which enjoyed an 18-car turnout on April 9. 2021 champion Matthew Fuhs of Roseville debuted a new car and immediately grabbed a checkered flag in the 25-lap race. Rocklin’s John Sproule is eager for a win but has emerged in the lead in the standings with a five-point lead over Lincoln’s Brandon Frantz, Roseville’s Ray Molina, Roseville’s Nathan Cleaver, and Vic Theberge of Citrus Heights.

Roseville’s Dayton Broyles leads the Mini Cup/Bando division but is still aiming for his first win of the season. Santa Clarita’s Stephen Bazen and Stockton’s Lucas Burton have also grabbed wins this season.

Additional information on fan attendance is available at www.AllAmericanSpeedway.com  Competitors will participate in practice activities on Friday before racing on Saturday. Grandstands open at 5pm followed by heat races at 5:15pm. Opening ceremonies are at 6pm with main events to follow. The Riebes Auto Parts Trailer Bash closes the show!

All American Speedway wants to thank @the Grounds for their support along with partners such as Roseville Toyota, Berco Redwood, Riebes Auto Parts, JM Environmental, Sinister Diesel, Foothills Tow, Velocity Solar, Guaranteed Rate Affinity- James Clark, AAMCO Transmission & Total Car Care of Auburn, CA, , Kim White Realtor, and A-All Mini Storage for their strong support of All American Speedway. Without competitor support and local community partners, these events would not take place. All American Speedway mandates a sound regulation for all competitors as specified in the track rule book.