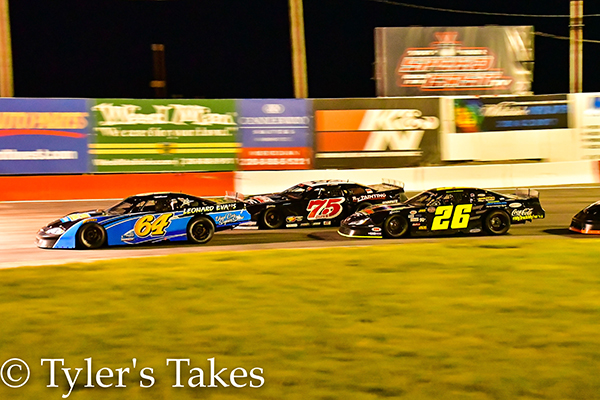 (August 26, 2020 from Kevin Peters) – The Sixth Annual “NAPA Auto Parts Idaho 208” will return to Meridian Speedway this Saturday, August 29th, for a big $10,000 payday to this year’s winner. The event will have a different look in 2020, however, as the NAPA Big 5 Late Model Series will take center stage this weekend. The event was traditionally a NASCAR K&N Pro Series West (now ARCA Menards Series West) event, but will now feature the Late Models with backing from several long-time local area sponsors, with additional contingency sponsorship furnished by PFC Brakes and Pit Stop USA. Photo by Tyler Schild.

More than 30 Late Model teams are expected to descend upon the quarter-mile asphalt oval, including big names throughout the West Coast. They will be competing for the richest purse the NAPA Big 5 Late Model Series has ever competed for, in a 208-lap event. It will also be a record distance for the Late Models at the facility, with the previous lengthiest event being 125 laps. A halfway break will give the team and drivers the opportunity to make adjustments, while changing up to two tires.

The 2020 version of the event will also see its fair share of stars, in a star-studded line-up. Local drivers will square off with drivers venturing to Southern Idaho, from throughout the West Coast. This includes one of the hottest chauffer’s in the country, Upper Lake, CA driver Jeremy Doss. Doss will be making his second 2020 trip to Meridian Speedway this weekend, in his former SPEARS SRL Southwest Tour Series Super Late Model. The 2018 SPEARS Southwest Tour Series Champion entered the season opener for the NAPA Big 5 Series and came home with a victory. Doss made a second trip to Idaho in July, taking home $5,000 for his win in the Idaho 200, at Stateline Speedway.

Doss will now head back to Meridian with self-confidence, with a racing program that has been on the top of its game this season. The 2020 SPEARS Modified Series Championship leader thinks his success in Idaho, earlier this season, will be a big help on Saturday, as he goes for the $10,000 win.

“I think so, having a bit of momentum going into a race always seems to help”, Doss exclaimed! “I’m really confident with our program right now, and look forward to competing for the win! Meridian is a track that I really like racing at, it is a really fun place.”

Doss will bring the same hotrod that he won earlier in the season with at Stateline Speedway, but it is a different car than he came home victorious at Meridian. The #35 machine will be fitted with the same powerplant, however, with a 602 Crate Engine under the hood. The two-time Montana 200 winner will be down on power from many of his competitors, but with the Hoosier 970 tire, he feels it will help him even more than it did back in May, as he speculated.

“I believe it’ll be to our advantage, especially since it’s such a long race! We were able to pick up the win on 10″ slicks earlier in the year, and now we are on the 8″ 970s, which I feel helps us even more!

Another big gun heading to the former cow pasture, and nearly 70-year-old speedway, is Northwest Racing Legend Garrett Evans. The four-time NASCAR Northwest Tour Elite Division and three-time Northwest Super Late Model Series Champion will be one to watch. Evans participated in the season opening event as well, finishing second behind Doss. He attempted the July 4th double header as well, but after setting fast time, a crash ended his weekend. Evans is looking forward to heading back to a track he enjoys, and which reminds him of another facility from his early days of racing.

“Meridian is a fun track to race on”, Evans stated. “I used to race a little bit at Orange Show Speedway (CA) in San Bernardino a long time ago, and it kind of reminds me of that place. It’s not one groove though. They added a little banking a few years ago and there is a second groove. I think it’s a really, really good track.”

The 49-time NASCAR Northwest Tour winner is used to travelling around the country, looking for big money races to compete in. He is very appreciative to be able to participate in an event a little closer to his East Wenatchee, WA home. And he is grateful for the opportunity that allows some of the areas Pro Late Model racers, to go after some big money.

“It’s fun to go racing for more money”, Evans began. “I think it’s really special that Meridian Speedway is trying to give these Pro Late Models on 8” tires a chance to run for $10,000. I think it is unique, and especially in these times where tracks aren’t allowed to have fans and tracks aren’t allowed to put together very big purses. To have the opportunity to run for $10,000 is really cool.”

The 2013 PASS Northwest Super Late Model Triple Crown Series Champion is looking to turn around a frustrating season to date. He has had speed, but not the finishes he is used to. That was especially true of his last two starts in Idaho, one of which was the Idaho 200 at Stateline Speedway on August 1st.

“The last time I ran was at Stateline (Speedway), and I didn’t do very good”, Evans admitted. “I look forward to doing better than I did over there. I ended up on top of a guy’s car. It was highly embarrassing.”

But Evans has a lot of history at Meridian Speedway. He loves the track and the family who promotes it. It would be the perfect place to get back to the top of the finishing order, at a track that is one of his favorite places to race.

“I’ve been racing at Meridian since 1977”, Evans began. “I love the place and I love the people down there. I used to race against Adam Nelson’s (Meridian Speedway’s Promoter) dad, Leroy. He raced in the Northwest Super Stocks back then. He ended up taking over the track, and now Adam runs the track. I have had a lot of good times over the years with those guys. I always look forward to going down there. It is probably one of my favorite places to race, that I have ever been to. They do a good job of making it fun for us racers, and that’s why we do it.”

On the other end of the spectrum, Haeden Plybon will be headed to Meridian Speedway at the young age of 16. He is the current championship leader at Stateline Speedway, in the Pro Late Model Division, and has two wins in four starts. He had a second place run in the season opener and blew a motor while running third in the Idaho 200. The driver from Spokane, WA opened the Meridian Speedway season with a fourth-place effort, after setting fast time. He will be looking to build on that success and is looking forward to competing for the $10,000 winner’s share of the purse, at a facility at which he enjoys competing.

“It’s cool to be running for such a big purse, and awesome to have the chance to run for it”, Plybon stated. “It’s a fun track that’s not like the rest of them, and it has its own character.”

In his young career, Plybon has not shied away from strong competition. It is something he looks forward to. He enjoys the test that drivers like Doss and Evans bring.

“I’m always up for the challenge, to race against the best. I look up to those guys and I would love nothing more than to beat them at a race to win $10,000, or any race for that matter. It’s always fun to run against the best that the West Coast has to offer”, Plybon concluded.

One driver who calls Meridian Speedway his home track is 2020 NAPA Big 5 Late Model Championship hopeful John Newhouse. Newhouse currently sits second in a very tight championship battle. He sits one point behind Randy Marshall Jr. and seven points in front of Tyler Monroe, with two events remaining. It is a treat for Newhouse to have such an event at his home track, and he is looking forward to competing this weekend.

“I love the fact that one of my home tracks has so much support from all the racers and the community, to put on a $10K to win race”, Newhouse expressed. “Meridian Speedway is a great venue, where we are racing right in the middle of town. And we usually have pretty good runs there. My daughter Hannah Newhouse has a Super Late Model Championship at Meridian!”

Newhouse may have a slightly different agenda, at this weekend’s big money event, as he needs to weigh the prospects of a championship, with making the big score in his pocketbook, as he described.

“I have to look at both sides of the fence…, points and the money. I really don’t plan on racing myself, that much next year, so winning the championship there, and another truck championship in the same year, would be pretty cool!”

But don’t expect to see Newhouse roll over, to fight for championship points only. He is a true racer and will look to defend his home turf, against the out of town teams looking to take home the lion’s share of the booty. He looks to be the local driver standing at the top of the heap at the end of the day.

“Well, all these big hitters Doss, Evans, and more seem to take the home court advantage away from us locals, because they are so good at what they do, week in and week out at different tracks. Don’t get me wrong, I feel like we have a better shot at beating those guys, cause it’s our turf. And yes, I plan on being the guy to keep the money here. That would pay for most of my year winning that $10K.”

Doss, Evans, Plybon and Newhouse will only be part of the story this weekend. There will be many other competitors that will be shooting for the big money. It could very well be that the biggest winners will be the fans in attendance Saturday night.

Contingency sponsors will make the weekend even more lucrative for the racers in attendance. Pit Stop USA will be providing contingency products such as a Bell Racing helmet, a Racing Electronics headset, and a gauge cluster from Quick Car, totaling nearly $2,000 in value. PFC Brakes has signed on to provide $700 in contingency certificates, giving back to their fellow racers.

Race day for the Late Models will begin with multiple practice sessions. General Admission Gates will open at 4:45 pm with Qualifying scheduled for approximately 5:30 pm. The Fast Qualifier will collect an additional $1,000, thanks to Boise Boys Transportation. Racing is slated to begin at 6:45 pm. One or two “B” Main events are planned, depending on car count. Both will pay $1,000-to-win, thanks to Trevor Cristiani Racing. The “NAPA Auto Parts Idaho 208” will feature a half-time break at lap 104, where teams can make adjustments and change up to two tires. The conclusion of lap 208 will see one driver awarded the richest prize for a Late Model in Meridian Speedway history, a cool $10,000.

Live race coverage by Meridian Speedway’s SpeedCast.tv crew will be available by pay-per-view at FloSports.tv.