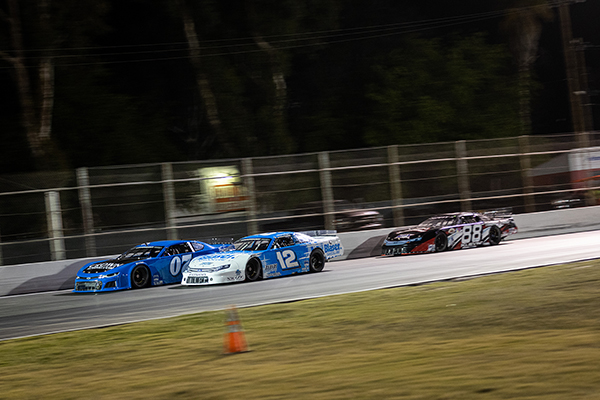 The first 100 kids into the grandstands will receive a race bag filled with goodies from race teams and all fans will be entered into a free raffle for prizes.

Adult tickets are $20, seniors are $15, youth ages 6-12 are $10 and kids five and under are free. All tickets will be sold at the track ticket booth the day of the event. Race fans can “Join” www.YouTube.com/ShortTrackTV for $19.99 per month for a members-only live stream as well.

The battle for bragging rights among two of the fastest 17-year-olds in the nation in stock cars came to a head in round three on April 30th. One of the all-time great Madera Speedway duels saw the pair trade the lead across 13 lead changes with over 40 laps of side-by-side racing.

Walbridge outfoxed Keller with a pass around the outside on the final restart, giving each driver one win this season. Keller leads Walbridge by just one point entering the fourth event of the year on Saturday with 80-laps of racing on tap. 14-year-old Ethan Nascimento, Clovis’ Shelden Cooper, and multi-time Madera Late Model champion Jason Aguirre round out the top-five in the championship.

The 51FIFTY Jr. Late Models had an equally dynamic round three in April, with Newport Beach’s Sean Hingorani debuting at Madera and promptly driving into victory lane. 15-year-old Hingorani battled with 2022 points leader Robbie Kennealy, age 16, throughout the race and throughout the afternoon, tying in qualifying before racing hard in the 70-lap feature.

Kennealy leads the series for drivers ages 10-16 years-old by 13 points over opening night winner Brody Moore of Colorado. Washington’s Kasey Kleyn – age 14 – is the most improved driver in 2022 from third in the championship. Rookie Joey Kennealy of Madera ranks fourth ahead of Nascimento. Loomis’ Kenna Mitchell is just six points out of the top-five as well. The 51FIFTY Jr. Late Models battle in a 70-lap feature across a 40-lap opening segment, followed by a 30-lap run to the finish.

The INEX Bandolero division continues to grow with Skyler Schoppe – who entered 2022 with no previous racing experience – enjoying the points lead over Las Vegas’ Kellen Keller.

Action gets underway on Friday with practice from 5pm until 8:30pm with pit gates opening at 3pm. On Saturday, pit gates open at noon with practice at 2pm. Qualifying hits the track at 4:10pm. Opening ceremonies are at 5:50pm with main events to follow.