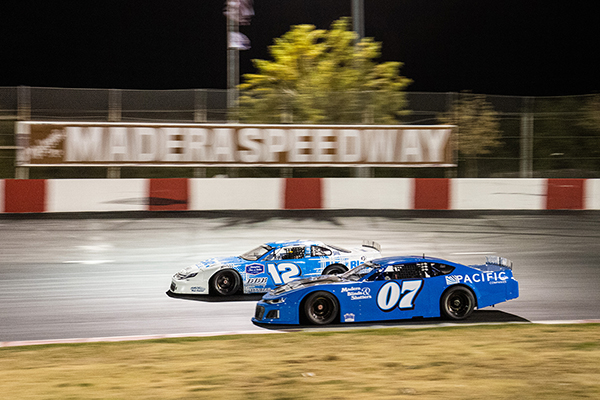 MADERA, CALIFORNIA (September 17, 2022) – The championship battle in the Lunkerdaddy Pro Late Models looks to go down to the wire, after Saturday night’s thriller with Las Vegas’ Kyle Keller topping Vancouver, Wash.’s Jadan Walbridge by just .005 seconds in the 80-lap feature at Madera Speedway. The MAVTV-televised championship concludes on October 15th with the Short Track Shootout, where Keller and Walbridge will be unofficially tied at the top of the standings. Photo by Ethan Smith

The first 50-laps of the penultimate Pro Late Model round of the season were led flag-to-flag by San Jose’s Jay Juleson after drawing the pole position. The first dozen laps saw the top-ten lined up around the bottom of the one-third mile speedway.

Walbridge won his fifth fast-time of the season but drew seventh in the redraw. He rode sixth throughout much of the opening segment before driving into fourth on lap 46. Eagle, Idaho’s Jacob Smith spent the lion’s share of the first 50 laps in the second position but was passed by Keller on lap 47.

Juleson enjoyed a three second advantage over the field when the race reached the Mission Racing Style Tortilla Chips break for interviews and adjustments on lap 50.

Juleson restarted inside of Keller but the lead immediately changed hands in Keller’s favor. Walbridge then used the outside to drive past Juleson into second as well. Walbridge drove inside of Keller to begin their side-by-side battle for the top spot. The first caution of the event fell on lap 55 when Loomis’ Kenna Mitchell tagged Coarsegold’s Shaun Reynolds, sparking a spin and relegating both to the rear.

Keller picked the outside line and maintained the lead. The next caution fell just a lap later when Atwater’s Jason Aguirre tagged the front stretch wall, then backed into the turn one wall.

2021 51FIFTY Jr. Late Model champion Brody Armtrout used the caution to drive past Smith on the outside for third.

Walbridge began throwing moves inside of Keller for the lead, showing his nose in turn three on multiple occasions. Ethan Nascimento of Manteca drove past Smith for fourth on lap 57.

Over the final five laps, Walbridge tried several crossover attempts and lunges up the inside for the lead to no avail. Keller and Walbridge ran the final two laps side-by-side around the speedway. Walbridge made one last drive into turn three but Keller prevailed by mere inches for his coveted third win of the season. Walbridge, Armtrout, Nascimento, and Smith rounded out the top-five. Keller’s win places the drivers into a dead heat at the top of the championship and propelled Keller past 200-laps led for the season.

Ethan Nascimento persevered over a wild battle with Washington’s Kasey Kleyn for his fourth consecutive 51FIFTY Jr. Late Model Series win in a 70-lap feature. The win extended Nascimento’s points lead and pushed him past 200-laps led as well.

Nascimento drew the pole position while fast-time qualifier Robbie Kennealy of Madera rolled off fourth. Kennealy fell as low as eighth during a second attempt at getting the race underway after Caden Cordova of Bakersfield spun. Martinez’ Vito Cancilla and Mill Valley’s Monty Tipton collided to bring out a caution on lap seven. When action resumed, Kennealy drove back up to fourth quickly.

A caution on lap 38 brought the race into its scheduled break two laps early, with Nascimento leading Kleyn, Kenna Mitchell, Kennealy, and a resurgent Tipton.

Kleyn tried to use the outside to nab the lead on the restart but Nascimento drove ahead. Mitchell capitalized to drive inside of Kleyn for second. Cancilla collided with Tipton for a hard crash on the front stretch that brought out a red flag on lap 60. When action resumed, Kleyn leaned on Nascimento to take the lead on lap 61. Nascimento drove back to Kleyn and they made contact in turn one. Kleyn then spun into turn three and brought out a caution on lap 65. Kleyn was unable to return to the event.

Andrew Williams of Madera won an unlikely victory in the INEX Bandolero feature, coming back from a spin and avoiding a late-race melee on the front stretch to be scored the victor. Skyler Schoppe of Clovis finished second and Kellen Keller of Las Vegas was third.

The highly anticipated 49th Harvest Classic presented by Protect the Harvest and Lucas Oil is up next at Madera Speedway on September 24, featuring tributes to Kenny Takeuchi and Donnie Large, Sr.