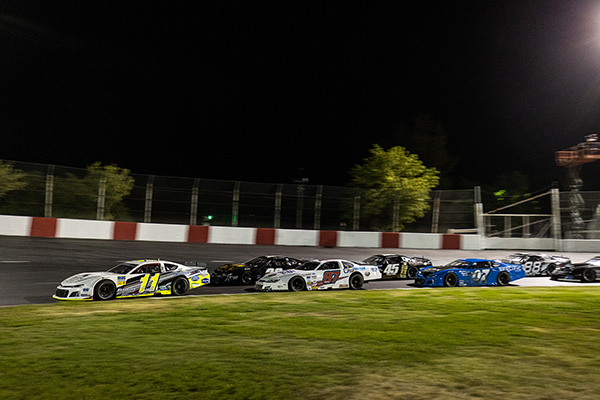 MADERA, CALIFORNIA (July 27, 2022) – A strong lineup of Lunkerdaddy Pro Late Models will battle for 100 laps in Saturday’s Summer SpeedFest for $5,000-to-win at Madera Speedway. They will be joined by 51FIFTY Jr. Late Models, a $1,000-to-win Legends Tour Series race, and INEX Bandoleros. Photo by Ethan Smith

The fastest one-third mile in the west will welcome a full pit area of competitors from across the west to Madera, Calif. with MAVTV cameras rolling. Adult tickets are $20, seniors are $15, youth ages 6-12 are $10 and kids five and under are free. All tickets will be sold at the track ticket booth the day of the event. Race fans can “Join” www.YouTube.com/ShortTrackTV for $19.99 per month for a members-only live stream as well.

An electric points battle in the Lunkerdaddy Pro Late Models will be injected with the excitement of visiting drivers chasing the $5,000 check on Saturday night. Las Vegas’ Kyle Keller won the Reverend Ron Spencer Red, White, and Blue Classic on June 25 to wrestle the championship lead away from Vancouver, Wash.’s Jadan Walbridge. Keller leads Walbridge – the 2021 champion – by just six markers heading into the weekend.

Napa’s Dylan Zampa headlines the contenders looking to spoil the Keller and Walbridge party. Zampa has won nine of the 11 features in 2022 at All American Speedway in Roseville to lead their championship. 2021-22 SPS Pro Late Model champion from Havasu 95 Speedway Cody Kiemele of Riverside will be searching for his first Madera checkered flag as well. Fellow Jr. standouts such as 2019 champion Joey Iest of Madera and two-time 2022 Jr. winner Sean Hingorani of Newport Beach are also entered. The 51FIFTY Jr. Late Model sponsor Carlos Vieira returns for the big SpeedFest event as well. Tyler Herzog is the most recent feature winner in Madera after claiming the club Late Model win on July 16.

Ethan Nascimento experienced a breakthrough weekend on June 25 in the 51FIFTY Jr. Late Model Series, taking fast-time and the 70-lap race win. Robbie Kennealy of Madera continues as the points leader in the series drivers ages 10-16 years old with an 18-point advantage ahead of Washington’s Kasey Kleyn. Nascimento is just 26-points in arrears in third, heading into the sixth race of the season.

Kleyn and Nascimento are both expected to run double-duty in Jr. and Pro on this hot weekend in Madera. Opening night winner Brody Moore of Colorado has drifted back to fourth in the standings ahead of Robbie Kennealy’s younger brother Joey in fifth. Loomis’ Kenna Mitchell recently scored a pair of Pro wins in Roseville and will aim for her first Madera Jr. win from sixth in the standings as well.

The young drivers in the Jr. Late Models race in a 40-lap opening segment followed by a break for MAVTV interviews and adjustments. A 30-lap race to the finish follows.

The growing Legends Tour Series will race for $1,000-to-win on Saturday in a 35-lap event. Brendan Ruzbarsky, son of Altamont Raceway fan favorite Rick Ruzbarsky, leads the championship standings ahead of perennial contender Cody Winchel and upstart Kayci Phillips. Ethan Nascimento and Madera’s hometown racer Aidan Phillips round out the top-five in the standings.

Skyler Schoppe of Madera and Las Vegas’ Kellen Keller are tied in the INEX Bandolero standings, with Keller having the edge over Schoppe with three wins to Schoppe’s two. 20-laps of Bandolero action is scheduled this weekend.

Action gets underway on Friday with practice from 5pm until 8:30pm with pit gates opening at 3pm. On Saturday, pit gates open at noon with practice at 1:45pm. Qualifying hits the track at 4:05pm. Heat races are at 5:15pm followed by opening ceremonies are at 6:10pm. All four main events will follow.