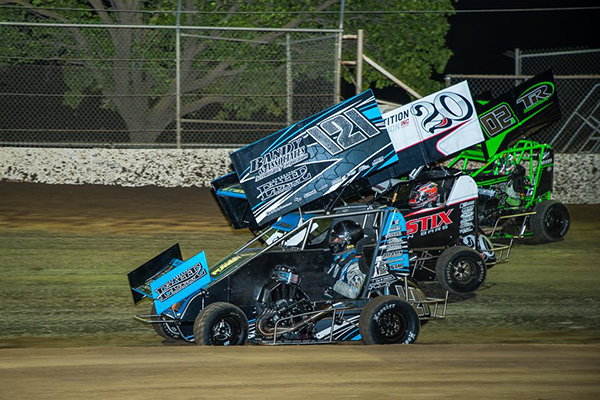 STOCKTON, CALIFORNIA (May 20, 2021) – The engines fire up again at Delta Speedway presented by Financial Center Credit Union on Saturday night with the fourth Micro Sprints points race of the 2021 season. A three-week layoff has drivers chomping at the bit in the Super 600, Non-Wing, Restricted, and Jr. Sprints at the 1/7th mile dirt oval in Stockton. Photo by Dennis Krumpleman

Fans can purchase their tickets in advance by visiting tinyurl.com/2021deltatickets on MyRacePass. The link can also be found at www.DeltaSpeedwayStockton.com Tickets are $10 for adults ages 13 and up, $5 for kids ages 6 to 12, seniors 55+, and military, and kids 5 and under are free! Pit Passes can also be pre-purchased by competitors for $20 or purchased at the gate.

Non-Wing Micro Sprints have put on a tremendous display in 2021 with daring last-lap passes for the win on the last two events by 14-year-old Jade Avedisian of Clovis. 58 different drivers have earned points through the first three rounds of the wingless action with Medford, Oregon’s Ashton Torgerson as the other feature winner this year.

The top-four in the championship are still racing for a victory this season, led by 2019 and 2020 champion Caden Sarale of Stockton. Former champion Dan Mognaga of Valley Springs is tied with 2020 Restricted champion Brandon Riveira for second in the order. Visalia’s Brian Gilbert ranks fourth ahead of opening night winner Torgerson. Saturday’s 30-lap feature pays $500-to-win.

2014 Super 600 champion Travis Labat currently leads the standings in 2021, enjoying a 19-point lead over 2018 champ Nikko Panella of Stockton. Labat is a perfect three-for-three with top-five feature finishes in his winged Micro Sprint. Fresno’s Raio Salmon, 2019 and 2020 champion Sarale, and Caeden Steele make up the top-five. Steele is the highest car in the standings with a win, with other winners including Fresno’s Jake Hagopian and Clovis’ Dominic Gorden. Super 600 also duels for $500 to win in a 30-lap contest.

“Big A” Austin Wood has worked his way to the top of the Restricted standings with two second place runs book ending a fourth-place effort in round two. The Sacramento driver had many great battles with Colton Key in Jr. Sprints and that continues in Restricted, where Key ranks second in the championship. Teagan Moles of Raisin Hill, 2017 Jr. Sprints champion Isabel Barnes of Brentwood, and Castro Valley’s Andrew Smith round out the top-five. Bakersfield’s Taylor Mayhew has scored victories twice as well. Restricted races for 25-laps with a guaranteed minimum of $300 to the winner.

Brody Rubio of Manteca has had a steady climb up the Jr. Sprints pecking order throughout his career. After seventh place in the 2019 standings, Rubio finished third in 2020. This season, Rubio has grabbed two wins to lead the way in the youngest division at Delta Speedway. Rubio is trailed by Oakdale’s Hayden Stepps, Bakersfield’s Blayden Graham, Millbrae’s Levi Osborne, and Jamestown’s Maverick Pedroni. A 20-lap event awaits the Jr. Sprints with no less than $200 up for grabs.