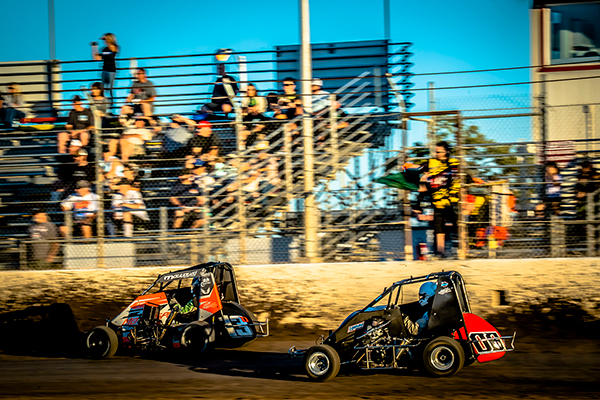 STOCKTON, CALIFORNIA (September 13, 2022) – Following a busy Dual at Delta over Labor Day weekend, the Micro Sprint competitors at the Delta Speedway presented by Valley Strong Credit Union return this Saturday for the 13th race of the 2022 season. The event serves as the penultimate round for the $1,000-to-win championships on the 1/7th mile dirt oval, with racing for Super 600, Non-Wing, Restricted, and Jr. Sprints. Photo by Maxwell Patrick Imagery

All seats are general admission, priced at $10 for adults, juniors ages 6-12, seniors, and military are $5, while kids 5 & under are FREE! Pit passes are $20. Tickets can be purchased through MyRacePass or at the gate. The drivers meeting will be at 4:30pm with hot laps and qualifying to follow. Fans who cannot attend can also see flag-to-flag coverage on The Cushion, the speedway’s Pay-Per-View partner this year.

The championship contenders in Super 600 were kept out of contention for race wins during the Dual at Delta weekend, with Stockton’s Nikko Panella preserving the points lead. His advantage over Medford’s Austin Torgerson is just 13-points with Austin’s younger brother Ashton residing in third place and 24-points out of the lead. Sacramento’s Austin Wood remains in fourth but enjoys only a three-point lead over Alex Panella for that position. The winged Super 600 machines will race for 30-laps and $500-to-win.

Panella and the Torgerson brothers are also engaged in a tight battle for Non-Wing’s championship, with none of the trio scoring wins over the Dual weekend. Panella’s lead in the wingless series is a bit larger than with the wings on. He leads Austin Torgerson by 24 points and Ashton Torgerson by 29 points. Jeffrey Pahule, Jr. of Brentwood is 76-points behind in fourth with Red Bluff’s Carsen Perkins rounding out the top-five. Non-Wing also races for 30-laps and $500-to-win.

Briggs Davis of Manteca increased his points lead in Jr. Sprints slightly after the Dual. Davis leads the youngest drivers at Delta Speedway with a 39-point lead over Oakdale’s Heston Stepps. Rancho Murieta’s Maya Mauldin won her second feature of the season during the Dual and is only two markers out of the second position. Vacaville’s Jackson Tardiff is 12-for-12 on top-ten finishes and runs fourth in the standings. Citrus Heights’ Haven Sherman has maintained fifth for much of the season.

Twin qualifying heat races and a 20-lap feature for $200 to win await the drivers in Jr. Sprints.

Courtesy of C&P Promotions, all member drivers in Juniors and Restricted who race at least 12 of 14 events will be eligible for drawings for a new Yamaha engine core and a new PMP chassis 600 frame and body.