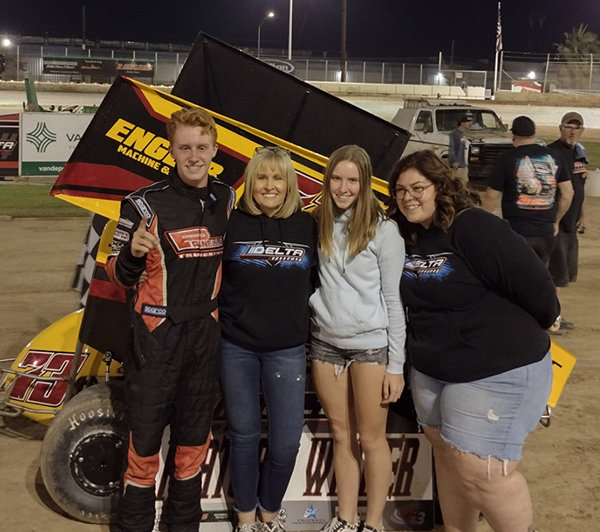 STOCKTON, CALIFORNIA (September 4, 2021) – Stockton’s Nikko Panella held off Raisin City’s Mitchel Moles for the $500 opening night win of the Hoosier Tire Dual at Delta Speedway on Saturday night. The Super 600 triumph came during one of four features for the dirt Micro Sprint spectacular in Stockton. Sunday’s finale will crown weekend champions with over $22,000 in total prize money. 110 Micro Sprints were in action at the 1/7th mile dirt oval at the San Joaquin County Fairgrounds.

Panella took the lead at the start of the 30-lap contest with Moles aggressively closing in. A slider attempt in turn three on lap three was unsuccessful, so Moles tried again on lap four. Panella ran the bottom through one and two and the top in three and four to protect his lead. Mariah Ede of Fresno stopped in turn three for a caution on lap four. Madera’s Logan Trevino went around the outside of Raio Salmon of Fresno for third on the restart. A side-by-side tussle ensued with Trevino clearing her for the position on lap eight.

A ferocious pack of lapped traffic raced in front of Panella by lap 13. Micro Sprint Mart $50 fast-time qualifier Cody Key of Fresno got a run going as he passed both Salmon and Trevino to take third on lap 19. Points leader Caden Sarale of Stockton got into a three-wide duel with Salmon and Trevino for fourth a few laps later. Washington’s Dominic Carter spun in turn four for a caution on lap 25.

Key kept up the strong performance as he looked outside Moles for second on the restart. Moles was unable to close in on Panella, with Panella earning the victory. Moles, Key, Salmon, and Sarale as the top-five. Sarale earned $100 as the Tarlton & Son Hard Charger, advancing from 13th to fifth.

2018 Non-Wing champion Tj Smith of Fresno earned his third win of the season worth $500. Smith led the main event with fast-timer Mitchel Moles in pursuit. Moles briefly showed his nose on the inside before the leaders lined up on the top of the speedway. Colin Kirby of Pleasanthill lost a right rear wheel requiring a caution flag on lap eight.

On the restart, the top-five again went upstairs while Mattix Salmon of Fresno tried to make something happen on the bottom to no avail. The race was red flagged when Johnathon Henry of Stockton flipped in turn one on lap nine. Points leader Caden Sarale of Stockton and Nate Wait of Lodi collided in turn two for the next caution.

Salmon battled with former champion Brandon Carey of Ripon for fifth on the restart while the top-four drove ahead. Moles kept Smith within arms length as they approached lapped traffic on lap 20. Side-by-side traffic in turn four on lap 24 impeded Smith. Moles dove inside of him in turn four on lap 25 but he couldn’t complete the pass. Smith held the lead for the win followed by Moles, Austin Torgerson of Medford, Ore., Carey, and Robbie Lewis. Ashton Torgerson advanced from 16th to sixth for the $100 Hard Charger.

Restricted had an all-Barnes front row, of no relation, with Jett Barnes of Visalia and Isabel Barnes of Brentwood. Isabel grabbed the lead on the opening lap of the 25-lap feature. Points leader Colton Key of Fresno dove inside Jett Barnes for second before the caution fell for Kellan Harper, Vito Celli, and San Diego’s Deegan Irey colliding in turn two.

Jett Barnes looked outside Isabel Barnes on the restart and took over the lead on lap four. Isabel made a slider attempt the following lap but Jett Barnes kept the top spot. Sacramento’s Austin Wood and Isabel Barnes battled for second in lapped traffic with ten laps remaining. Wood finally cleared Barnes on lap 21 but was nearly a straightaway behind Jett Barnes at that point. Jett Barnes earned $300 ahead of Wood, Isabel Barnes, Cash Lovenburg of Visalia, and Bakersfield’s Taylor Mayhew who set fast-time. Madelyn Gjerness advanced seven positions to be the $100 hard charger.

The Hoosier Tire Dual at Delta Speedway continues on Sunday night with drivers meeting at 4:30pm and a complete night of racing to follow. Drivers will be competing for a full purse and more than $8,000 in points fund awards.