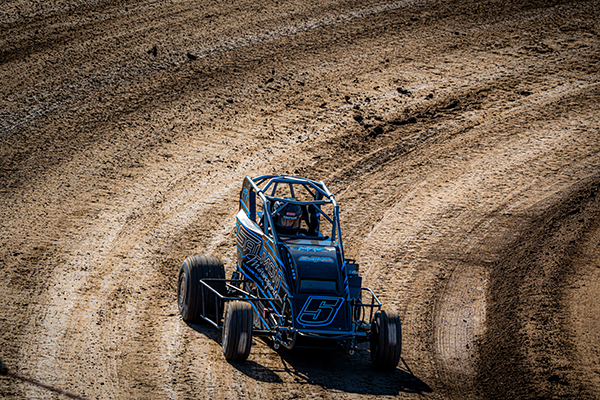 Torgerson anchored the 23-car Non-Wing field in the 30-lap affair from the pole position. Incoming points leader Nikko Panella of Stockton drove past Brentwood’s Jeffrey Pahule for second on the opening lap as well

Salmon started fourth and used lapped traffic to snooker second from Panella on lap 14. Eighth starting Caden Sarale of Stockton charged to fourth before a caution fell for Tyler Chamorro of Oakdale stopped in turn three with ten laps remaining. The caution erased a 1.6 second lead for Torgerson over Salmon.

Torgerson led Salmon into lapped traffic in the closing stages of the event. On the 30th lap, Torgerson quickly approached a slower lapped car. He slid up the track in turn one with Salmon pouncing up the inside for the exciting win. Panella finished third followed by Sarale and Saturday night Non-Wing winner Taylor Mayhew of Bakersfield.

Fresno’s Cody Key grabbed the victory in the Super 600 competition worth $500 after 30-laps of action. Stockton’s Alex Panella started on the pole and looked poised to win after leading the early laps. Key immediately drove to second at the start. 2016 Super 600 champion Brandon Carey of Ripon used the outside to nab third away from outside pole sitter Austin Torgerson of Medford, Oregon on lap nine.

The caution flew on lap 10 for Isabel Barnes of Brentwood stopped inside of turn four. Key drove to the outside of Panella on the restart, then executed a cross over move down the front stretch. Panella narrowly was credited with the lap 12 lead before Key cleared him on the backstretch. Key would lead lap 13 but it was nullified by a red flag for Nate Matherly of San Jose flipping onto his side in turn one.

Panella restarted with the lead but Key once again went to the top side. Key drove past Panella to lead lap 13 officially while Panella fell back to fourth. Lapped traffic over the final ten laps gave Carey a shot on Key. Carey showed his nose inside Key on two occasions in turn three to no avail. Cody Key won the Super 600 feature followed by Carey, Torgerson, Sarale, and Panella.

Restricted points leader Lucas Mauldin of Rancho Murieta won his seventh feature win at Delta Speedway in 2022, taking the 25-lap $300-to-win event. A six-car skirmish stopped the action in turn one at the first attempt at a start. It was followed by a three-car melee in turn three at the conclusion of lap one. Polesitter Kyle Fernandez of Tracy was credited with the lap one lead before the caution fell. Mauldin took over the top spot from Fernandez on lap three as racing resumed. 2021 Jr. Sprints champion Brody Rubio of Manteca advanced to third after starting eighth while Fernandez fell back to fourth.

Nicholas Leonard, Jr. of San Jose, Josiah Vega of Antioch, and Peyton Whitehouse of Pleasanton were part of a multi-car caution on lap eight in turn three. Saturday winner Andrew Smith of Castro Valley stopped on the backstretch while running second to bring out a caution on lap 14. He had to surrender the position and restart at the rear.

David Anderson of Clayton led all 20-laps for his first career Jr. Sprints victory. Points leader Briggs Davis drove around the outside of Anderson on the initial attempt at a start, but it was nullified by an incident in turn one. Anderson held the lead on the restart attempt and never relinquished it.

Davis settled for second while Braxon Vasconcellos won a hard-fought battle with Saturday night winner Maya Mauldin of Rancho Murieta for third. Jackson Tardiff of Vacaville rounded out the top-five.

Delta Speedway returns on September 17 for the 13th and penultimate round of the 2022 championship season.