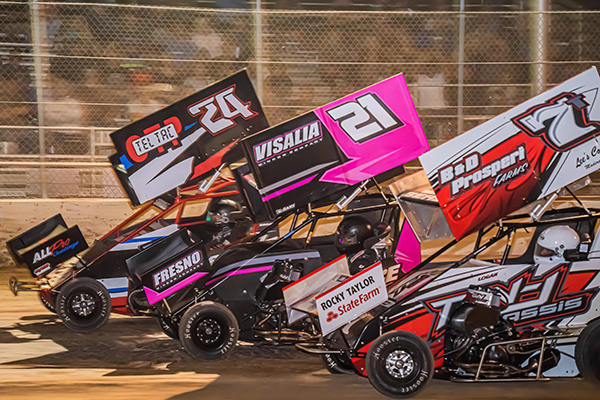 Stockton’s Caden Sarale leads both the Super 600 and Non-Wing championships. Sarale recently won his first Midget race by taking the Western Midget Racing victory at Ventura Raceway over a 20-car field. The champion of the 2021 Super 600 division will earn a test and a race in a 360 Sprint Car for Justyn Cox Racing. Former champion Nikko Panella of Stockton has two victories and is just 45-points behind Sarale. Four-time winner Caeden Steele of Fresno is third in the standings and just 46-points out of the lead. Each has a shot to win the $1,000 championship and the coveted Sprint Car opportunity in Wednesday’s penultimate race in the series. Fresno’s Raio Salmon and Stockton’s Alex Panella round out the top-five.

Sarale’s Non-Wing advantage is sizeable, with a 103-point lead over rookie Brandon Riveira of Tracy. Oregon brothers Austin and Ashton Torgerson rank third and fourth. Austin Torgerson has been on a roll, winning the Hoosier Tire Dual at Delta weekend championship before sweeping last weekend’s California races with triumphs at both Plaza Park and Dixon. Valley Springs’ Dan Mognaga is fifth. Both Super 600 and Non-Wing compete in 30-lap features for $500-to-win.

Visalia’s Jett Barnes used a sweep of the Restricted features during the Hoosier Tire Dual at Delta to advance into the lead in the championship. Fresno’s Colton Key ranks second with a 16-point deficit. Sacramento’s Austin Wood, Brentwood’s Isabel Barnes, and Castro Valley’s Andrew Smith make up the balance of the top-five. Restricted competes in a 25-lap feature for a guaranteed $300 to the winner.

Manteca’s Brody Rubio has seven victories in the Jr. Sprints this season, earning a 53-point cushion over Oakdale’s Hayden Stepps in the points. Millbrae’s Levi Osborne, Antioch’s Josiah Vega, and Pleasant Hill’s Vito Cancilla are in pursuit of the championship. Delta Speedway’s youngest drivers race for 20-laps and a minimum of $200 for the victory.

Tickets are $10 for adults ages 13 and up, $5 for kids ages 6 to 12, seniors 55+, and military, and kids 5 and under are free! Pit Passes can also be pre-purchased by competitors for $20 or purchased at the gate. Pit gates open at 1pm with the driver’s meeting at 5:30 pm. Hot laps and qualifying will follow.