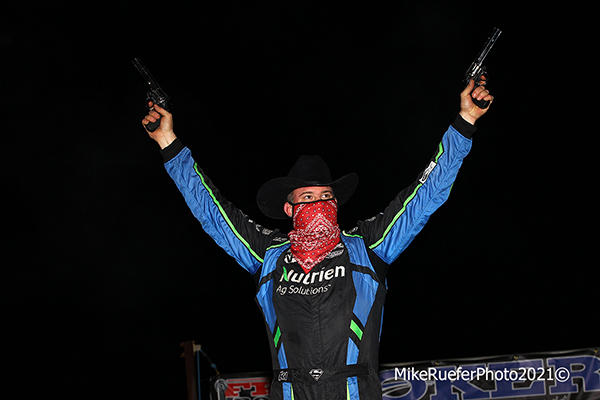 (January 14, 2021 from Aaron Clay) – The Keyser Manufacturing Wild West Shootout presented by O’Reilly Auto Parts has had a race scheduled on Wednesday night for as long as I can remember and the 15th annual edition is no different. The Wednesday night race is unique in that it is the only weeknight race not capped by a weekend and, historically, it has been an unpredictable “wild card” event. While this year’s event may not have featured a surprise winner, it certainly delivered some great racing.

Not only did Thornton Jr.’s quickest lap earn him the pole starting position for the first heat race, he was also awarded the $100 SportTruck RV Fast Time Award presented by Screven Motor Speedway. In addition to the extra cash, Thornton Jr. is now in the driver’s seat to claim the $1,000 bonus offered through the Premier Waste Services Shock the Clock program, which is awarded to the Super Late Model driver who sets the quickest overall qualifying time throughout the entire six race miniseries. Thornton Jr.’s time of 14.525 seconds is over a half second quicker than that of Chatham, Illinois native, Brian Shirley, who held the quickest timed lap up until Thornton Jr. unseated him. The significantly quicker lap time can be attributed to more moisture within the track surface when Thornton Jr. qualified on Wednesday, due to a later start time, which limited the sun’s effect on the FK Rod Ends Arizona Speedway surface.

Thornton Jr. took advantage of the pole starting position in his heat race, cruising to the victory and ensuring himself a spot in the Schaeffer Oil redraw, which would be held later in the evening and determine his starting spot in the night’s main event. Jason Papich of Arroyo Grande, Calif., Stormy Scott of Las Cruces, N.M., Bobby Pierce of Oakwood, Ill., Jonathan Davenport of Blairsville, Ga., and Dustin Sorensen of Rochester, Minn., joined Thornton Jr. as heat race winners on Wednesday, along with joining him in redraw.

With over 170 total cars in the pits, Keyser Manufacturing Wild West Shootout race officials did their best to keep the show moving along as quickly as possible on Wednesday, with the Schaeffer Oil redraw being held in the pits, off-camera. Stormy Scott drew the “number one” oil can, earning him the $100 Gorsuch Performance Solutions Pole award and allowing him to start the 30-lap, $5,000-to-win feature from inside row one. Unfortunately for Scott, Jonathan Davenport was just to his outside and had the preferred higher line at the entrance of turn one.

Davenport wasted no time when the C&D Bonding green flag dropped on Wednesday, hammering the cushion at the entrance of turn one and easily clearing Scott by the exit of turn two, while bringing Thornton Jr. along with him into second. The first of three Midwest Sheet Metal caution flags flew on lap five, when Chad Simpson of Mt. Vernon, Iowa, slowed with apparent rear end damage, ending his night. Another caution was displayed on the very next lap, when Jared Landers of Benton, Ark., slowed to a stop at the exit of turn two. Landers was able to continue and recovered to finish 14th.

The next restart attempt featured a multi-car crash that changed the complexion of the race. Davenport again executed a perfect restart, sticking primarily to the outside groove, as he had done all race thus far; However, Thornton Jr. lost second place to Jason Papich and found himself under heavy pressure from Brian Shirley, for third. The final Midwest Sheet Metal caution flag came out on lap seven, when Shirley threw a giant slide job into turn one, successfully clearing Thornton Jr., all the way to the cushion. Unfortunately, Shirley slid a little higher than he wanted, getting swallowed by the cushion, causing him to hit the wall and stop in the middle of turns one and two. Thornton Jr. was already committed to the throttle and had nowhere to go, piling into Shirley, who then was hit by Stormy Scott and Bobby Pierce. While Pierce only suffered minor damage and was able to continue, the grinding crash ended the night for Thornton Jr. and Scott, who finished 22nd and 23rd, respectively. Shirley suffered heavy damage as well, but was able to complete all 30 laps and finished 17th.

With four of the top six cars suffering major damage or being eliminated entirely, Davenport took the lap seven restart with several new faces behind him, including 16th place-starting Tyler Erb of New Waverly, Texas, who had worked his way up to third. Erb didn’t need long to dispose of Papich for second place and had his sights set on Davenport, for the lead. With Erb breathing down his neck, Davenport began to hit lapped traffic just past the halfway mark and experienced difficulty passing the lapped cars, as they stuck to his preferred line around the top of FK Rod Ends Arizona Speedway.

Tyler Erb saw his opportunity at the completion of lap 20, getting underneath and alongside Davenport at the exit of turn four. The two drivers banged doors and traded paint coming to start lap 21, with Erb slightly beating Davenport to the line; However, Davenport would not be denied on Wednesday, sticking to his preferred outside groove around the track and thwarting Erb’s challenges. “Superman” led the rest of the way, winning the $5,000 prize by 0.593 seconds over Erb, who advanced 14 spots to finish in the runner-up position, securing his second straight $500 Premier Waste Service Hard Charger Award. Jason Papich, Mike Marlar of Winfield, Tenn., and Bobby Pierce completed the top-five on Wednesday.

Davenport’s victory is not only his second of the week, bringing him to just one win away from starting to collect on the Keyser Manufacturing Quarter-Million bonus, but it is also the fifth of his career at the Keyser Manufacturing Wild West Shootout presented by O’Reilly Auto Parts. This triumph lifts Davenport into a two-way tie for fourth on the events’ all-time win list.

The Mesilla Valley Transport and Border Tire Modifieds presented by Arizona Differential had a tough act to follow on Wednesday, after Sunday’s race ended in a photo finish. Dustin Strand of East Grand Forks, N.D., took the early lead and seemed to have the car to beat. Strand survived three Midwest Sheet Metal caution flags that flew throughout the race, holding off competitors such as Fito Gallardo of Las Cruces, N.M., and Rodney Sanders of Happy, Texas.

Sanders quickly moved into second place when Gallardo suffered mechanical problems, which relegated him to finish 15th, but he just didn’t have enough to keep up with Strand. The final seven laps were completed without further incident and Dustin Strand crossed the finish line first, ahead of Sanders by 2.101 seconds; However, the win would be taken from Strand, when a minor rules infraction was discovered during post-race inspection.

With only six Midwest Sheet Metal caution flags being displayed during the other two main events on Wednesday, the RHRswag.com X-Mod division presented by Barnett Harley-Davidson nearly matched that number, in their 20-lap feature. Preston Carr of Carrington, N.D., wasted little time advancing from his sixth place starting position, primarily utilizing the outside groove around FK Rod Ends Arizona Speedway, and successfully passed Scott Bintz of Jamestown, N.D., for the lead by lap nine.

Carr continued to lead past halfway, with Bintz, Cole Campbell of Mexico, Mo., Lance Schill of Langdon, N.D., and Brock Gronwold of Fergus Falls, Minn., all battling for the runner-up position. The final Midwest Sheet Metal caution flag was displayed on lap 14, setting up a six lap sprint to the finish; However, no one had anything for Carr, as he cruised to the victory by 1.767 seconds over Campbell, before parking his X-Mod in Hoker Trucker Victory Lane. Gronwold finished 3rd, ahead of Bintz and Langdon, N.D.’s Bryan Kakela, who made his debut in the 15th annual Keyser Manufacturing Wild West Shootout on Wednesday, rounded out the top-five finishers.