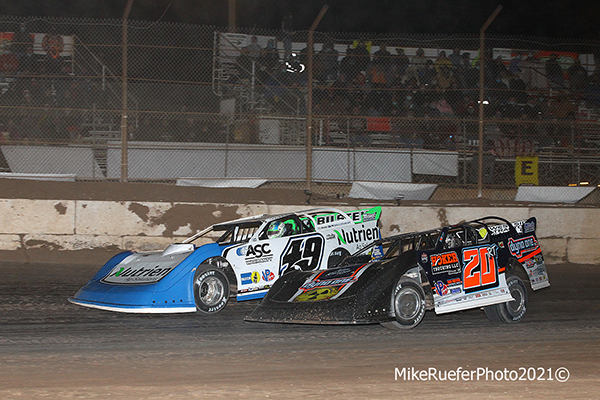 Tony Toste of Pismo Beach, Calif., led the way in group qualifying for the Dirt Track Bank Super Late Model division presented by Black Diamond Race Cars, speeding around the small 3/8th’s mile FK Rod Ends Arizona Speedway track surface in 15.114 seconds. Toste earned the $100 SportTruck RV Fast Time Award presented by Screven Motor Speedway for his efforts and became eligible for the $1,000 Premier Waste Services Shock the Clock program, which will be awarded to the Super Late Model driver who sets the quickest overall time throughout the entire event. Unfortunately for Toste, that is where his good fortune ended, as he incurred damage and was unable to finish his heat race, before suffering mechanical problems in his B-main later in the evening, ending his night.

Jonathan Davenport secured the outside front row starting position and that was all he needed, firing off to lead the start of the main event, blazing around the top of FK Rod Ends Arizona Speedway, which proved to be the preferred line throughout the night. Davenport was setting a blistering pace and began hitting lapped traffic by lap eight, with Ricky Thornton Jr. and Garrett Alberson in hot pursuit.

Thornton Jr. began cutting into Davenport’s lead, as the race eclipsed the halfway mark, while Alberson remained in striking distance of both; However, the race suddenly experienced a rash of Midwest Sheet Metal caution flags, with Bobby Pierce slowing on lap 25, having suffered a flat right rear tire. Pierce was able to rejoin the field, only to suffer another flat right rear tire on lap 32, ending his night.

Two other Midwest Sheet Metal caution flags flew between Pierce’s incidents, as Rusty Schlenk of McClure, Ohio, spun at the entrance of turn one on the lap 26 restart, before Donny Schatz of Fargo, N.D., spun in turn two on the lap 28 restart.

Up until Pierce’s second flat tire caused the fourth and final caution flag, Davenport continued to have his hands full with Thornton Jr. on each restart. Thornton Jr. was able to get underneath Davenport on several occasions, trading the lead with him on lap 27, then leading lap 31 at the line, by a nose; However, Ricky was unable to clear Davenport, allowing “Superman” to maintain the preferred high line.

As the saying goes, timing is everything and Davenport appeared to be his strongest on the final restart, with eight laps remaining. Davenport completely checked out and ran away in the closing laps, gapping Thornton Jr. by 1.157 seconds at the finish, collecting the $5,000 prize. Brian Shirley of Chatham, Ill., kept pace with Davenport and Thornton Jr., but just didn’t quite have enough to contend and settled for third place on Saturday, while Chris Simpson of Oxford, Iowa, charged in the closing laps, to claim fourth. Cody Laney of Torrance, Calif., impressed many after finishing second in his heat race earlier in the evening, before rounding out the top-five in Saturday’s feature.

Making his debut in the Keyser Manufacturing Wild West Shootout presented by O’Reilly Auto Parts, Chad Simpson of Mount Vernon, Iowa, advanced the most positions on Saturday, finishing eighth after starting 22nd. Chad earned the $500 Premier Waste Service Hard Charger Award and takes the early lead for most positions gained throughout the entire event, an honor which will pay $1,000 the Super Late Model driver who passes the most combined cars over the six race miniseries.

Davenport’s triumph is the fourth of his career in Wild West Shootout history, moving him out of a six-way tie for 10th place on the all-time event wins list and now into a six-way tie for fifth. “Superman” asserts himself as the only Super Late Model driver who could possibly contend for the Keyser Manufacturing Quarter-Million Challenge, a feat that has never been accomplished and is only awarded if a driver could somehow pull off the unthinkable; sweep the entire event, winning all six races.

The Mesilla Valley Transportation and Border Tire Modifieds Presented by Arizona Differential found a familiar face in Hoker Trucking victory lane on Saturday, as defending division champion, Dustin Strand of East Grand Forks, N.D., picked right back up where he left off in 2020. On paper, it would appear that Strand ran away with the show, after leading all 25 laps; However, this could not be further from the truth.

While Strand enjoyed a large lead in the early laps of Saturday’s main event, he found himself in heavy lapped traffic during the closing laps, allowing Lucas Schott of Chatfield, Minn., and Shane Sabraski of Rice, Minn., to cut into his lead. At one point, it appeared that Schott was going to make a move on Strand, who was still being delayed by cars he was attempting to lap. Somehow, Strand was able to successfully navigate his way through the lapped cars, while staving off his challengers, securing the $1,000 victory by 0.669 seconds over Schott.

Meanwhile, Schott had his hands full with Sabraski at the line, narrowly nipping his fellow Minnesotan by 0.050 seconds, in a near photo finish for the runner-up spot. Rodney Sanders of Happy, Texas and Tyler Peterson of Hickson, N.D., completed the top-five finishers in the Mesilla Valley Transportation and Border Tire Modified division presented by Arizona Differential.

The RHRSwag.com X-Mod division presented by Barnett Harley-Davidson featured a last-lap exchange of the lead on Saturday, though it was a bit of a rocky road to get there. The 20-lap feature was slowed by several Midwest Sheet Metal caution flags, including a red flag on lap nine, for a multi-car incident at the entrance of turn one.

The race offered a three-way battle for the lead, between Jory Berg of Grand Forks, N.D., Brock Gronwold of Fergus Falls, Minn., and Parker Hale of Grand Meadows, Minn., with each driver remaining within striking distance of each other, throughout the event. It was Berg who made a daring three-wide pass for the lead, getting underneath Gronwold and Hale just past the race’s halfway mark, after the red flag was lifted. Berg continued to lead narrowly over Gronwold, with Hale in hot pursuit of both of them in the closing laps.

A debris caution setup a two-lap dash to the finish, as Berg remained committed to the inside line, while Gronwold railed the tricky cushion around the outside of FK Rod Ends Arizona Speedway. The two made contact at the exit of turn four, coming to the white flag, as Gronwold’s left front tire struck Berg’s right rear. Both continued after the tangle, but Gronwold successfully thwarted Berg’s momentum, allowing him to dive underneath Berg at the entrance of turn one. The two made slight contact again, as Berg allowed Gronwold to slide up the track in front of him, then executed a perfect crossover move at the exit of turn two, gaining the lead back from Gronwold.

Berg was able to sprint to the checkered flag just in front of Gronwold, by 0.329 seconds at the line, while Hale finished third, 0.625 seconds behind Berg. Shane Sabraski wheeled Randy Laage’s X-Mod to a fourth place finish on Saturday, while Jake Smith of St. Joseph, Minn., completed the top-five. Berg collected $500 for his first career Wild West Shootout victory, while an exhausted Gronwold stated “that was all I had”, proving he left it all on the track in those closing laps.