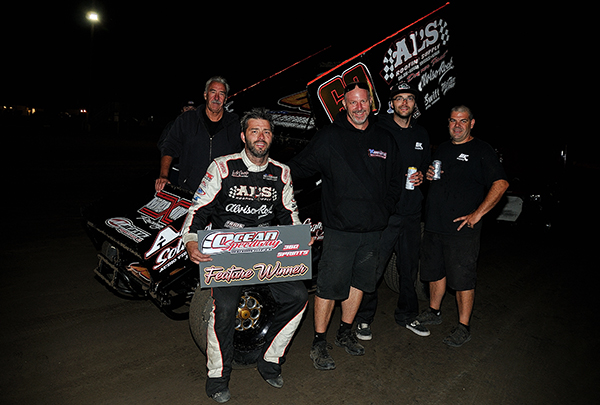 Clovis’ Corey Day earned fast-time honors but did not start the main event. Roseville’s Jodie Robinson won the dash for the pole position of the 30-lap contest. She drove ahead of former USAC West Coast 360 champion Tristan Guardino at the start of the feature. The leaders encountered lapped traffic by lap five. Guardino showed Robinson a nose into turn one. Robinson then aggressively split the lapped cars into turn three to crowd approval, before Adam Kaeding went over the edge and stopped for a caution flag.

Robinson picked up her front wheels on the restart and surrendered the lead to Guardino. Jason Chisum slowed for a caution on the following circuit. Kaeding pounced on the restart, soaring past both Robinson and Guardino into turn one for a lead he would never relinquish despite multiple restarts.

2019 Ocean Sprints champion J.J. Ringo followed Kaeding up to second position as well. Nick Ringo drove over an infield tire in turn three for a caution on lap 11. Cautions flew again on the restart attempt when Jeremy Chisum and Adam Kaeding tangled in turn two. Robinson passed J.J. Ringo for second on the restart, before they made contact entering turn one with Ringo’s car briefly on top of Robinson’s tail tank. The furious battle was slowed by Nick Ringo stopped in turn three a lap later. An additional caution fell on lap 14 for Kurt Nelson and 2020 champion Mitchell Faccinto tied up after a battle for fifth in turn three.

Guardino used the inside into turn three to snooker the lead from Kaeding on lap 15. Kaeding picked up a big run on the outside on the backstretch the following lap, moving past Guardino for the lead as Guardino spun for a caution flag. Kaeding led Robinson into the restart, before a caution for Guardino, Connor Danell, and Bradley Dillard tangled in turn two. This caution necessitated a red flag for a fuel stop after a combined 70 laps had been run around the speedway.

J.J. Ringo, tenth starting Joey Ancona, and Lincoln’s Tanner Carrick all moved past Robinson following the restart. Zane Blanchard drove from 17th starting position to just outside the top-five as well.  Lapped traffic added to the drama for Kaeding with five laps to go, allowing J.J. Ringo to close in quickly.

Kaeding’s lead fell to a car length with two laps to go, with a nifty over-under move into turn three on a pair of lapped cars giving Kaeding the separation he needed. Kaeding took the checkered flag in the hour-long affair over Ringo, Ancona, Carrick, and Robinson.

Bower and Prickett lined up on the third row for the 20-lap main event. Contact between Prickett and Cameron Beard during the opening lap scramble into turn one ended Prickett’s night early and required a caution flag. When racing resumed, Hawaiian Kala Keliinoi took the lead from Atascadero’s Randi Pankratz. Bower drove into the lead on lap two.

Citrus Heights’ D.J. Freitas made his debut in the No.7 Spike Chassis and drove from eight starting position into second place using the outside line. Freitas went on to challenge Bower on a few attempts, but Bower drove ahead for the win. Keliinoi won a race-long battle with Pankratz for third with Megan Moorhead of Santa Paula finishing closely behind in fifth.

Miller was quickly up to fourth by lap seven from the rear of the field. 15-year-old Andrew Pearce made a run from ninth starting position, passing Frost for third. A restart on lap 15 gave Pearce a shot to slide past Trevor Clymens for second as well. Ryland, Pearce, Miller, Clymens, and Kelly Campanile were the top-five.

Tickets are available at www.OceanSpeedway.com or at the gate.