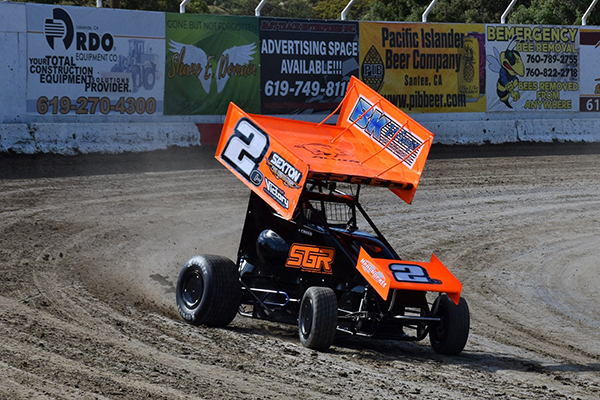 (November 9, 2020 by Scott Daloisio) – Sheldon Creed, the newly crowned NASCAR Gander RV & Outdoors Truck Series champion, will be teaming with Sexton Gatlin Racing for the final California Lightning Sprint Car Series races of the Covid shortened 2020 season. First off will be the $1,000.00 to win November Classic at “The West’s Fastest 1/3 Mile High Banked Clay Oval,” the Bakersfield Speedway, on November 17th. He will then be headed farther north to the Placerville Speedway for the “Hangtown 100” on November 19th, 20th and 21st.

A native of Alpine, California in southern San Diego County, Creed, who turned 23 at the end of September, won the Gander Series title in breathtaking fashion last week. Nicknamed “The Showstopper,” he was coming from ninth place on a restart with three laps to go. Amazingly, he passed all eight of the cars in front of him in less than a lap and led the final two circuits for the race win and the season long championship.

Creed’s last appearance with the CLS came at the Barona Speedway on April 6, 2019 when he finished third in the main event. At Bakersfield, he will battle with many of the same drivers he mixed it up with at Barona including five-time CLS Champion Bobby Michnowicz of Lomita, Camarillo’s Cody Nigh, A.J. Bender of San Diego, and Lakeside’s Brent Sexton. Also, amongst the entrants at the track affectionately known as the “Okie Bowl” will be rising teenage stars Grant Sexton of Lakeside, Ryan Greco of Palmdale, Aiden Lange of Lakewood, and Gardena’s Dominic Del Monte.

After one night off, the CLS will venture north to Placerville and be joined by the Bay Cities Racing Association (BCRA) for three straight nights of racing. All four of next week’s races will also feature the USAC National and Western States Midgets on the program.

Due to the Covid-19 crisis, spectators will not be allowed to attend next week’s races. However, fans from all over the world can see every lap of the action on Flo Racing. All four nights will come on at 6:05 PM Eastern (3:05 Pacific). For more information or to subscribe to Flo, fans can use the following link. https://www.floracing.com/
If you or your company would like to become part of the CLS series for the season in 2021, please call Alex Grigoreas at (909) 437-3170.