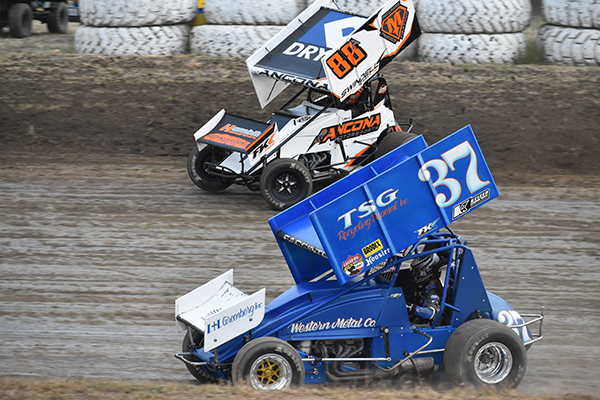 WATSONVILLE, CALIF. (July 24, 2020) – Mitchell Faccinto of Hanford became the fifth winner of the 2020 Ocean Sprints presented by Taco Bravo season on Friday night, sliding past two-time champion Shane Golobic for his first series victory. The series has yet to have a repeat winner since its June start at the quarter-mile dirt oval at the Santa Cruz County Fairgrounds. Photo by Joe Shivak

Faccinto slid past Fremont’s Golobic on the final restart entering turn one with just three laps to go. Golobic stayed within reach of Faccinto throughout the closing laps, and finally made one attempt on the bottom in turn three coming to finish. Golobic bounced off the rear of Faccinto and spun, with Faccinto driving away to the checkered flag.

“I knew my only shot at him was to him was to slide him in one and two and beat him to the cushion into turn two. It worked,” Faccinto said. “Shane’s really good and doesn’t make too many mistakes. He’s always raced us really clean. I’m happy to finally get a win here. It’s been seven or eight years and a lot of podiums.”

Fast-time qualifier Chase Majdic of Redding swept past dash winning Golobic to lead lap one of the 22-car, 30-lap feature. Last Friday’s winner DJ Netto advanced to third quickly, then traded the second position with Golobic in lapped traffic. Golobic took the position back on lap 11. Majdic then bobbled on the top of turn two with Golobic showing his nose, but unable to make a pass.

Golobic and Majdic went side-by-side briefly at the halfway mark before the caution flew on lap 16 for 2019 champion James Ringo spinning in turn three. Kaleb Montgomery drifted backwards on the restart while Golobic again withstood a challenge from Netto.

Majdic bounced over the cushion in turn two before smacking the wall and flipping, forcing a red flag on lap 19 and surrendering the lead. Majdic was uninjured. Golobic inherited the top spot and kept the lead while Netto fell back to fourth after he too bounced through turn two. Kurt Nelson fell from fifth when he had an issue getting through the corner as well.

A caution on lap 27 for Jason Chisum spinning in turn two set up the run to the finish. Faccinto took advantage to make the winning pass. Golobic’s spin allowed Bud Kaeding to finish second ahead of Netto. A late surging Tanner Carrick of Lincoln finished fourth ahead of 13th starting Justin Sanders. Washington’s JJ Hickle won the 12-lap B-Main to set the starting lineup from the 30 cars on hand.

Brent Curran of Antioch became the first repeat winner of the year in the IMCA Sport Mods in the fifth round of their season. Max Baggett of Prunedale led the first four laps. A caution on lap four saw the seventh starting Curran launch forward. He restarted fourth but emerged with the lead one lap later on lap five.

12th starting Tyler Rogers drove up to third but spun on lap ten to surrender the position. Incoming third in points Steven Allee was involved in an incident in turn four, bringing out a caution on lap seven as well.

Curran led Adriane Frost across the stripe for the 20-lap win with Justin McPherson of San Martin, Timothy Allerdings, and Jim DiGiovanni the top-five.

Jones used a lap 13 restart to finally wrestle away the lead on lap 15. Tommy Velasquez finished second with Nick Velasquez in third. Mike Grenert overcame a difficult 12th starting spot to finish fourth with Ryan Amlen of Hollister in fifth.

Tenth starting Ryan McClelland of Scotts Valley extended his points lead in the Four Bangers with his second win of the season. Tony Gullo of Watsonville led the opening lap from the pole position until Roy Iller took over. Iller, the 2019 Police-N-Pursuit champion from San Benito Sherriff’s Office, took over the lead on lap two. Iller slowed with a mechanical issue, handing Gullo the lead on lap five.

McClelland was up to second by lap six, then drove around the outside of Gullo to make the decisive pass for the lead. McClelland won comfortably ahead of Gullo, San Jose’s Chuck Kessinger, Felton’s Kate Beardsley, and San Jose’s Eddie Gallaher.

Nate Graham of the Santa Cruz County Sheriff’s Office stormed from the eighth starting position to win his second straight Police-N-Pursuit main event. John Hohmann of Scotts Valley Police was second with Rob Buchanan of the Task Force Racers, AJ Waltrip of Santa Cruz County Sheriff’s, and Jackie Yeung of Capitola Police rounding out the top-five after 15-laps of competition.