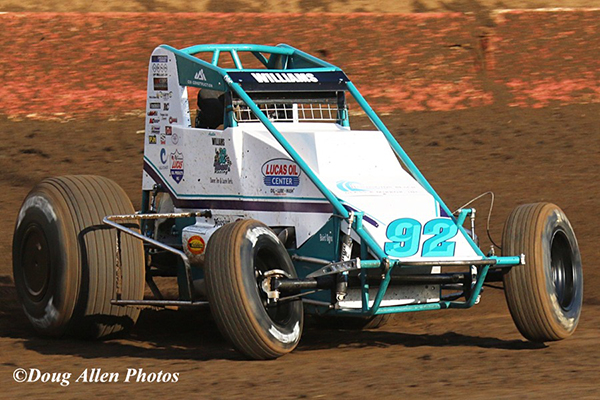 (March 9, 2021 from Lance Jennings) – This Friday (March 12) and Saturday (March 13), the cars and stars of the AMSOIL USAC/CRA Sprint Car Series will invade The Dirt Track at Kern County Raceway Park (KCRP). The season opening doubleheader marks the first time that the non-winged 410 sprints will rumble at the 1/3-mile oval. The winged Van De Pol IMCA Western Racesaver 305 Sprint Cars will join the showcase as the pit gates open at 2:00pm, spectator gates open at 4:00pm, time trials at 6:05pm, and racing starts at 6:40pm. Single day prices are $40 pit passes, $30 fan passes, kids passes (12-6) are $15, children passes (5 & under) are FREE, and camping is FREE. The event will follow COVID-19 protocols and face coverings are requested for people on the grounds. Located at 13500 Raceway Boulevard in Bakersfield, California, more event information can be found at kernraceway.com or by calling 661-835-1264. Floracing.com will broadcast a pay per view live stream of the races over the internet. Photo by Doug Allen

NOTICE TO RACERS:
– THE 2019 RULE BOOK WILL BE FOLLOWED in regards to race format and weight rule (1,325 lbs. with driver)
– 2021 APPROVED/LEGAL TIRES: THE HOOSIER 105/18 HTW RIGHT REAR TIRES ARE NOW USAC/CRA LEGAL. The 105/16 Medium, 105/18 Hard, and 105/18 F85A are also legal with the series. Hoosier Tires are mandatory on all four corners.
– ALL RACERS MUST PURCHASE THEIR USAC LICENSE / MEMBERSHIPS ONLINE PRIOR TO THE EVENT AT USACRACING.COM OR USACLICENSE.COM. (If racers have a membership question, contact Julie Tanaka at julietanaka@aol.com.)
– California state protocol calls for competitors, crews, officials, and anyone on the grounds to practice safe social distancing, proper sanitizing, and follow local regulations regarding the COVID-19 Coronavirus.
– 2021 APPROVED/LEGAL MUFFLERS: EXTREME: 6014-3535, 3615-3535; SCHOENFELD: 14272535, 14272735-78; FLOWMASTER: 53545-10, 13516100, 13516101; COAST FABRICATION: 350x625x17-2S; B&B: FRAC-0375S; SPINTECH: 1545P SUPER STOCK
*Failure to comply with the muffler rule will risk disqualification from the event.
– TRANSPONDERS ARE MANDATORY: Series officials will have transponders to rent at the track for those racers that do not have them.
– ONE WAY DRIVER RADIOS ARE MANDATORY.
– FRONT AXLE TETHER SYSTEMS (2-Chassis, 1-King Pin to King Pin) ARE MANDATORY.
– FULL CONTAINMENT SEATS ARE MANDATORY.
– Cockpit adjustable shocks ARE ALLOWED.
– USAC/CRA charges a $25 entry fee to all competitors.

To get to the speedway, take Interstate-5 and exit at Enos Lane (CA 43, Exit 246) and drive to Raceway Blvd. The track is on the west side of the interstate.