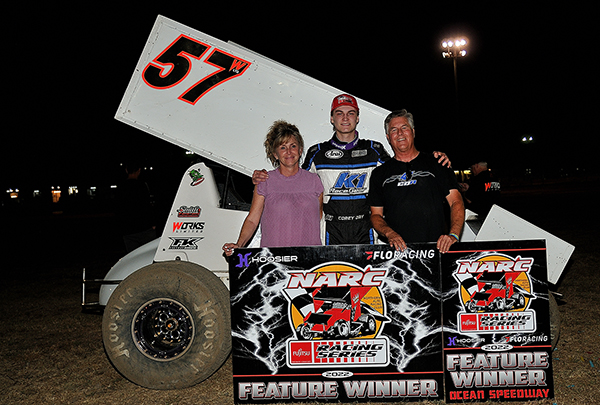 “Yeah it’s cool. I can’t thank Kevin and Paul enough for the opportunity,” Day said. “(Dominic) got into lapped traffic there. I could run it a little harder than he could being stuck behind those guys. I got to him and threw a slider on him. Lapped traffic was really tough. I was just trying to pick off as many as I could to have a good buffer there. It worked out. Super pumped.”

Day led ARP qualifying but lined up third in the feature, behind Sunnyvalley Dash winner Mitchell Faccinto and points leader Dominic Scelzi of Fresno. Faccinto failed to answer the call, moving Day up into the pole position.

Scelzi used the outside to snare the lead from Day before the leaders quickly approached the back of the field by lap five. Day showed his nose in turn four, then slid underneath Scelzi into turn one to lead lap eight.

Both Day and Scelzi made some dramatic maneuvers in traffic, including Scelzi sneaking through the middle of a three-wide situation in turn four on lap 15. Foresthill’s Ryan Robinson charged from 12th on the grid into the top five by lap 20. Aromas’ Justin Sanders battled with Colfax’s Willie Croft for third while Day stretched out his advantage over Scelzi. Corey Day earned his fourth career NARC 410 win over Scelzi, Croft, Sanders, and Robinson. 13th starting DJ Netto finished sixth.

“He did an awesome job,” Scelzi said. “I think he just did a better job in traffic. Disappointing but Corey got by the lapped cars and we didn’t.”

Western Midget Racing presented by Masters Design and Construction staged its 12th race of the season for the stock production-powered Midgets, with a familiar winner. After winning the 2021 championship and the April 1 race at Ocean, Brentwood’s Blake Bower won again in the 20-lap feature.

Bower immediately drove from third into the lead on lap one. Upper Lake’s Brody Petrie suffered a big flip after touching wheels with Antioch’s Shawn Arriaga in turn three. Petrie was uninjured.

On the restart, Oakley’s Bryant Bell got sideways into turn one which allowed Las Vegas’ Kyle Hawse and Arriaga to drive past into second and third. Bell tried to come back at Arriaga but the pair tangled in turn one and both flipped. Bell was even clipped by Santa Cruz’ Logan Mitchell as well. Bell was able to continue, however.

Bower led the rest of the feature ahead of Hawse, Peoria, Ariz.’s Cory Brown, Moorpark’s Todd Hawse, and a resurgent Bell.

On West Coast Stock Car Hall of Fame weekend, and with the backdrop of both Al Pombo and Marshall Sargent being hall of famers themselves, the IMCA Modified competition was fittingly won by fellow honoree Jim Pettit II of Prunedale. Hollister’s Andy Obertello led the first five laps before Pettit used the outside to snare the lead on lap six.

Oakley’s Jacob Mallet, Jr. grabbed the 20-lap IMCA Sport Modified win over a 13-car field. Heat race winners Chuck Golden of Pittsburg and Watsonville’s Billy Robertson made up the front row starters. Golden drove into the lead and led the field into slower traffic by lap six. Mallett closed in on Robertson for second before a caution on lap seven for a pair of single-car spins in turns one and two.

Robertson jumped the attempt at a restart, moving Mallet up to the front row alongside Golden. Mallet took advantage to take the lead on lap eight. Robertson then spun in lap 14 to set up a six-lap shootout.