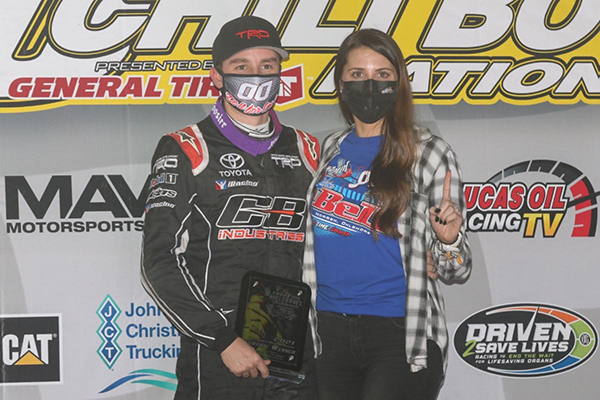 (January 15, 2021 from Bryan Hulbert) – Winning for the seventh time since 2014, Oklahoma’s Christopher Bell threw the iRacing/CB Industries No. 14 into high gear and ran away from the field through the closing laps of Thursday’s John Christner Trucking Qualifying Night.

“Chad [Boat] has got this thing tuned up and it’s driving really good but man, those yellows were killing me at the beginning of the race. I just wanted to get some green flag laps in. I knew this thing was good where I could stick the bottom nice and run up if I needed to,” stated Bell.

Locked into his eighth Championship A-Feature in as many years, Bell’s run to the lead began from the fourth starting spot. Chasing Steve Buckwalter and Spencer Bayston through the opening laps, the first five revolutions were Buckwalter on point before coming under fire as the RMS No. 1s of Bayston made the advance off the second turn on Lap 6. Brady Bacon and Christopher Bell in tow, Bell rolled the cushion from third to first only to have the pass called back by the caution working Lap 8.

Back to Lap 7, Bayston, Bacon, and Bell again went at it for the lead with Bell to second on the restart. Getting momentum, the lead was in hand once again, but just like before, the caution negated the pass on Lap 9.

Keeping the No. 84 in tire tracks on the restart, the three-time Chili Bowl Champion made the slide for the top spot through turns one and two on Lap 11.

Asked about having to make the pass for the lead so many times, Bell said, “It’s was frustrating. You’re only going to get so many shots at the lead with those guys. Spencer [Bayston] and Brady [Bacon] and really talented drivers so I knew when they got put back in front of me, they were going to take my line away and I was going to have to find something else. Didn’t want that to happen, but luckily my car was good enough I could kind of go where they didn’t.”

Holding off Bayston through the next restart on Lap 13, the next laps saw California’s Buddy Kofoid move to second in the Keith Kunz Motorsports No 67. Green through Lap 17, the final restart saw Bell find traffic on Lap 24 with just under 1.5-seconds on the field.

The World Wide Technology Raceway Flip Count made it to 34, with all drivers uninjured.

The 35th annual Lucas Oil Chili Bowl Nationals presented by General Tire continues Friday, January 15, 2021, with Driven2SaveLives Qualifying Night. The River Spirit Expo Center opens at 9:00 A.M. with Hot Laps at 4:00 P.M. and Racing at 5:00 P.M. (CT). A limited number of Pit Passes will be available to the General Public.