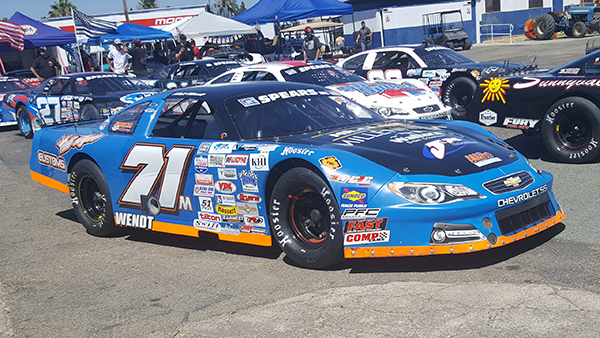 (August 10, 2020 from Kevin Peters) – Middleton, ID driver Zach Telford has been impressing fellow racers and fans since he was 10 years-old, when he started in the Box Stock Outlaw Karts in 2014. He has over 60 career wins, including seven in 2019 alone, in the Late Model and Modified Divisions. He has accumulated three wins in the 2020 season already. He will now be looking to impress the teams of the SPEARS SRL Southwest Tour Series, when he heads to All American Speedway on August 15th, for the “JM Environmental 150 presented by 51 FIFTY”. He will be behind the wheel of the Garcia Racing Toyota Camry, making his debut with the team as well.

“My Crew Chief, Danny Cristiani, is good friends with Mike Garcia”, as Telford explained about how the deal came together. “They were talking, and Mike mentioned he had a couple races open. The ZTR (Zach Telford Racing) Team wanted me to get some experience running the SRL, so when this opportunity presented itself, we took it.”

The 16-year-old will be stepping up to the premiere Super Late Model Racing Series on the West Coast, after scoring top-10’s in the SPEARS Modified Series, ARCA Menards West Series, and top-fives in the Inter Mountain Outlaw Modified Series and Domino’s Pizza Legends Series, with the latter showing eight top-fives in 10 2018 starts. He was also the youngest NASCAR Super Late Model, as well as Division 1 Modified winner, in the Idaho Region. Telford will now turn his attention to All American Speedway and his SRL debut.

“I feel like racing the Spears Tour Late Model’s will bring a whole new experience to me”, Telford explained. “Just to be able to be there will be awesome, cause these guys are the real deal. The competition will be great, and like I said, they don’t come to mess around, they come to win.”

The former Young Lion Legends Series Champion and “Sportsman of the Year” will be looking to gain experience in the SPEARS Southwest Tour Series Super Late Models. He hopes to learn from the experienced drivers and champions in the series and bring the car home in one piece, as the Rookie-of-the-Year Challenger stated.

“I plan to just run my best and learn from these other guys who have been doing this a lot longer than me.”

Telford will be the fourth driver in the Garcia Racing Super Late Model this season. Christian McGhee was behind the wheel at both SRL Irwindale Speedway events, scoring a best finish of ninth last month. He also drove the car in the “Star Nursery 100” at the Bullring at LVMS, finishing second to Kyle Busch. Nick Joanides wheeled the car in the Southern Super Series “Rattler 250” at South Alabama Speedway, where they finished 15th. Matt Wendt took the reins at Stockton 99 Speedway in the “JM Environmental Wild West Shootout – Shoot to Thrill 127 presented by 51 FIFTY” and came home ninth.

It will now be Telford’s turn to take the wheel, and he is thankful for the opportunity. He is grateful for those who have made it a possibility to compete against the toughest Super Late Model drivers on the West Coast.

I would especially like to thank my dad, mom, and my family for this chance”, Telford began. “I want to thank Danny Cristiani, Mike Garcia, The ZTR (Zach Telford Racing) Team, Rowlandscape, Builder’s First Source, James Hardie, and Project Filter.

The “JM Environmental 150 presented by 51 FIFTY LTM.” will be Round #5 of the season for the SPEARS SRL Southwest Tour Series. It will pay $5,000 to the winner, thanks to long-time series sponsor Performance Friction Brakes. Practice for the series is scheduled to begin at 12:30 pm (PST) on Saturday, with Qualifying at 4:15 pm and Opening Ceremonies at 5:00 pm. The SRL Super Late Models will be joined by the Mini Cup / Bandoleros, Late Models, F4’s, Super Stocks, Jr. Late Models and Limited Modified, for a huge night of racing. For those not in attendance, the SPEARS Southwest Tour Series event will be live streamed on www.SpearsRacing.TV. The local NASCAR Divisions will be live streamed at www.AllAmericanSpeedway.TV.