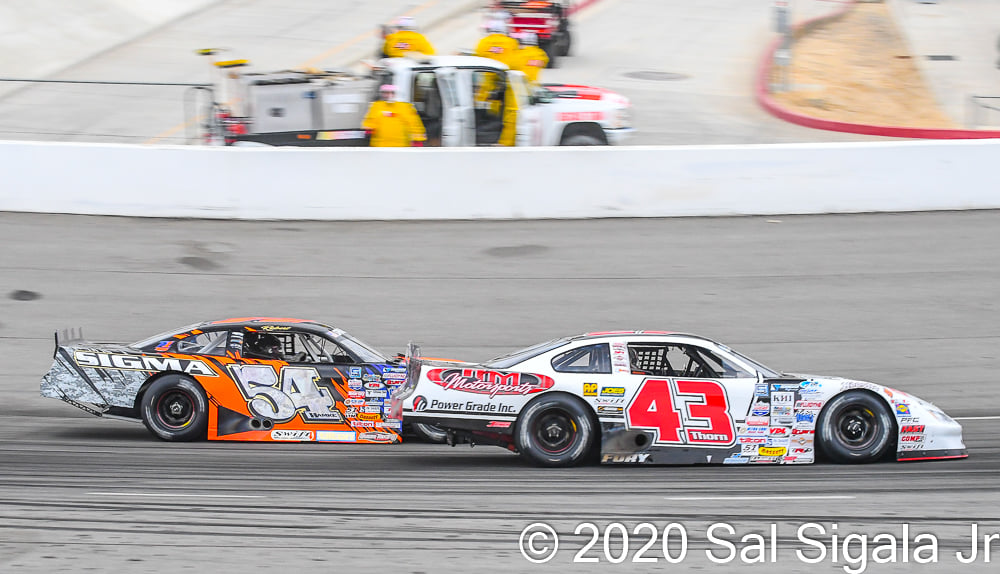 (November 19, 2020 by Kevin Peters) – Event: The “Retro Custom Metals 137” is round number eight of nine, in the 2020 championship season, and will take place at the Bullring at Las Vegas Motor Speedway. This is typically the championship event for the series, but because of Covid-19, an event was added to the schedule at Irwindale Speedway on December 19th. This will be only the second Super Late Model event held at the facility this season. Photo by Sal Sigala

Big Payout: $10,000 will go to the winner thanks to David Mulcahy, and “Winner’s Bonus” sponsors Tilton and MPI (Max Papis Innovations). A special trophy will be presented to the winner of this event, which has become a tradition for high paying events sponsored by Retro Custom Metals and David (Homie) Mulcahy. The winner will receive a refurbished fully functional “one arm bandit” slot machine, redesigned as a trophy.

Popular Joint: The season finale will take place at the Bullring at Las Vegas Motor Speedway (NV). The “Bullring” is averaging 26.4 SRL cars per event, the highest of any facility with more than one event. This will be the 26th event at the facility for the SPEARS SRL Southwest Tour Series.

Record Entry: 45 Super Late Models are entered for this weekend’s action. It will shatter the all-time record of 37, set at the 2004 season opener at Altamont Raceway Park. It will be the sixth consecutive SRL race at the “Bullring”, with at least 30 cars.

Lupton Returns: Part-time NASCAR Gander Outdoors Truck Series competitor Dylan Lupton will make his return to the series, after participating in the first two events of the season. A hard wreck at Kern County Raceway put his SRL season on hold, but he will be back in a new VanDoorn Super Late Model. Lupton had a best finish of eighth, in his three 2020 “Truck Series” starts. In nine career SRL starts, he has three top-five and four top-10 finishes.

Pro Late Model Champion: Cole Williams will make his second start in the series, after finishing sixth at Kern County Raceway in May. The two-time Lebanon I-44 and Nashville Fairgrounds Speedway PLM track champion will be a teammate to John Dillon, in a Port City Super Late Model for Collins Motorsports.

Championship Shake-up: With championship contenders Linny White, Jacob Gomes, Cole Moore and John Moore scheduled to miss this weekend’s event, the top-10 in the standings will experience a dramatic shake-up. The result could see Derek Thorn clinch his fifth SPEARS SRL Southwest Tour Series Championship, by finishing 21st or better. He would become the first driver in series history to clinch the championship before the season finale.

Rookie Battle: 2020 Irwindale Speedway Late Model Champion Dean Thompson leads the Rookie-of-the-Year Standings by 137 over Joey Iest. Buddy Shepherd, Brandon Farrington and Jonathan Mawhinney round out the top-five. Nine rookies are entered this weekend, including the top-four in the standings.

And so, it Ends: Unless there is a wedding cancellation, Jacob Gomes’ streak of 106 consecutive starts in the series will come to an end. Gomes first start in the SRL was at Stockton 99 Speedway, in October of 2009. He participated in the final three events of that season. He hasn’t missed an event since. When asked about the conflict, Gomes said of his friend’s wedding, “If the wedding gets cancelled (Covid-19 restrictions), we’re going to Vegas. The car is ready.” Gomes is the series start leader, two ahead of Scott Sanchez and was the 2015 series champion.

Colorado Contingent: Three drivers from the state of Colorado will make the trip to Las Vegas. 2019 SRL Rookie Jace Hansen will lead the trio, after finishing second in the October Classic at Kern County Raceway the previous event. Mark Neff will also make the trip, after qualifying eighth at the October Classic, but finished 21st after suspension failure. Nick Cooper will make his series debut as a teammate to Mark Neff, and the Rocky Mountain Motorsports Team. Cooper will make the jump from the Pro Truck Division at Colorado National Speedway.

Double Duty: Two-time Spears Modified Series Champion Dylan Cappello will make the trip from North Carolina to Las Vegas, to participate in both the SRL and Modified events this weekend. Cappello will be in a Super Late Model owned by Scott Sanchez and will act as his teammate for the weekend. He will also be in the Dave Arce owned Modified.

Local Flavor: Jim Wulfenstein, Chris Clyne, Scott Gafforini, Tanner Reif, Preston Peltier, Johnny Spilotro, and Jimmy Parker Jr. call the Las Vegas area their home. Peltier is the only one of those who hasn’t called the Bullring at Las Vegas Motor Speedway his home track. Gafforini was a six-time Super Late Model titlist, while the 2018 and 2019 championships were won by Clyne and Parker Jr., respectively. Wulfenstein was a two-time Super Late Model track champion.

Past Winners: Derek Thorn and Blaine Rocha are the only two former winners of this event, on the pre-entry list.

SPEARS Modified Series: 36 Modifieds are currently on the expected entry list for the “Optima Batteries 75 presented by FAST”. The list includes drivers from seven different states. Six of those drivers are from the state of Idaho and four are from Colorado. Six drivers on the roster have SPEARS Modified Series wins on their resume. The drivers will ne racing for the $2,500 winner’s check.

Race Coverage: The “Retro Custom Metals 137” and the “Optima Batteries 75 presented by FAST” will both be shown on MAVTV at a date to be named later. They will be live streamed on SpearsRacing.TV, beginning at 3:00 pm (PST).