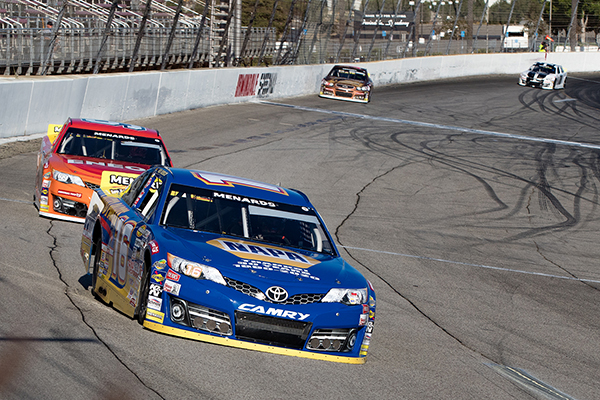 ROSEVILLE, Calif. (July 29, 2020) – Douglas County Speedway roars in Roseburg with the ENEOS/NAPA AUTO PARTS 150 on Saturday, Aug. 8, featuring the newly-titled ARCA Menards Series West. The event will mark the 18th visit for the stock cars of the West Series to the .375 mile oval at the Douglas County Fairgrounds.

It marks the first stock car touring series race in Oregon this year. Race fans throughout Southern Oregon have showed tremendous support for the race since its return in 2002. Local support from sponsors such as Clint Newell Auto Group have also been instrumental in making the most of the event.

A limited number of race fans will be able to attend the race. Tickets are available beginning Wednesday, July 29 at 8 a.m. PT for $35.00. For more information, visit https://tinyurl.com/2020ENEOS150Tix

In both 2017 and 2019, the 150-lap nationally-televised event became the precursor for the series championship. In 2017, third-generation driver Todd Gilliland drove to victory on the way to the title. In 2019, Wisconsin teenager Derek Kraus duplicated that feat. Both victories came while driving the No. 16 NAPA AUTO PARTS Toyota Camry for Bill McAnally Racing.

Piloting the familiar blue and yellow NAPA Toyota in 2020 is Fresno, Calif.’s Giovanni Scelzi, a series rookie. Scelzi enters the series after becoming the youngest winner in the history of the famed World of Outlaws sprint car series on dirt. His father Gary is a four-time NHRA drag racing champion as well.

Leading the 2020 ARCA Menards Series West championship is 15-year-old Jesse Love of Menlo Park, Calif. Driving the No. 19 NAPA Power Premium Plus Toyota Camry, Love has opened his rookie campaign with wins on the road course at Utah Motorsports Campus and in the most recent West race at Irwindale Speedway on Independence Day. He has finished in the top-two in all four of his starts this season. Gilliland holds the record for the youngest series champion at 16 years 5 months. Love may break that record in 2020 if his momentum continues in Roseburg.

Love leads Bakersfield’s Blaine Perkins by 17 points in the championship. Denver, N.C. rookie Gracie Trotter ranks third in the standings aboard the No. 99 ENEOS Toyota Camry, with a best finish of third. 2019 NASCAR California State Champion Trevor Huddleston of Agoura Hills, Calif. and Todd Souza from Aromas, Calif. rounds out the current top-five.

The series will compete at Evergreen Speedway in Monroe, Wash. on Friday Aug. 7 before traveling south to race for the fans at Douglas County.

The Roseburg race is slated to be nationally-televised on NBCSN at a later date.