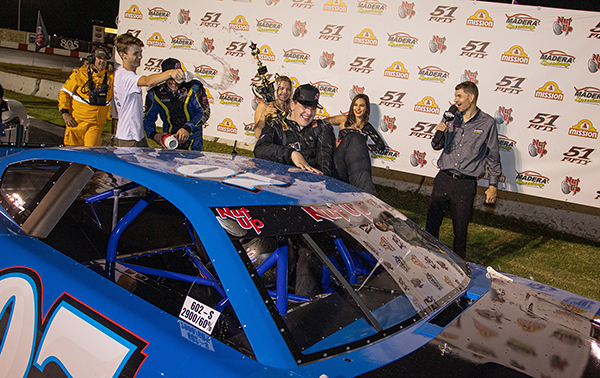 “It feels really good. Learned a ton from these last two races. Glad to put a good one together. It’s all starting to come together and I could not be more blessed to have this opportunity,” Walbridge said. “I thought I was managing (the tires) and with 20-30 to go they started going (away) pretty good.”

The race started with a pair of no. 51 cars battling as Bakersfield’s Racin Vernon tried to use the outside to wrestle the lead away from Carlos Vieira. Vernon led lap one by a scant .027 seconds then led lap two by just .011 seconds. Vieira remained steady on the bottom, leading laps three and four before Vernon edged ahead on lap five. Vernon finally cleared Vieira on lap ten to wrap up the side-by-side duel.

A three-car skirmish in turn two brought out the first caution when Jason Aguirre, Las Vegas’ Kyle Keller and incoming points leader Austin Herzog of Clovis tangled. The ensuing melee saw officials park Herzog for the night which resulted in a large points swing for the championship.

Howard Holden fell from third to seventh on the restart before a caution on lap 16 for Glen Cook spinning in turn one. Vernon restarted on the outside, bringing Walbridge with him up to second. 2020 51FIFTY Jr. Late Model champion Bradley Erickson earned third a lap later on the top as well.

Rick Thompson spun on lap 20 on the backstretch to require a caution. When things resumed, Walbridge picked up the battling on the inside of Vernon. Walbridge worked inside Vernon to take the lead exiting turn four to complete lap 25.

Both Aguirre and Bradley Erickson slowed and went to the pits on lap 32. Erickson rejoined the race and tangled with Cook for a caution on lap 39. Bakersfield’s Seth Wise and Dylan Zampa of Napa each passed Vieira around the outside on the restart to take third and fourth. Wise then challenged Vernon for second before the lap 50 break.

Walbridge led Vernon, Wise, Zampa, and Vieira at the conclusion of the first 50-laps. After the break for MAVTV interviews and race car adjustments, Walbridge stormed ahead while a great race developed behind him. Zampa advanced to second while Vieira fell to seventh. Vieira then battled with Keller while up front, Wise got around Zampa for second on lap 63.

Brody Armtrout spun out of the top-ten for a caution on lap 77. Wise fell back to fifth on the ensuing restart, thrusting 12th starting Tyler Herzog into the battle with Zampa for second. Zampa and Herzog collided entering turn three on lap 83. Herzog spun, collecting Wise and Cook. Both Wise and Cook were unable to continue while Zampa was sent to the rear of the field.

Keller assumed second while battling for third ensued behind him. Walbridge darted to a 2.5 second victory ahead of Keller, Erickson, Vieira, and a resurgent Zampa rounded out the top-five.

Armtrout entered the picture late in the opening 40-lap segment, hounding Polhemus for the lead. Armtrout took over the top spot on lap 30 and led Polhemus, Smith, Robbie Kennealy of Madera, and Phoenix’s Jeffrey Erickson into the Mission Foods break.

Temperatures were still as high as 98 degrees for the second half. Smith and Kennealy went inside Polhemus to move him back to fourth. Polhemus then went to the outside to pass Kennealy in a side-by-side duel. They ran alongside each other for seven laps before the pass stuck for Polhemus on lap 62.

Carson City, Nev.’s Nick Halen won a battle of the Battle Born state, topping Las Veags’ Jordan Holloway for the 35-lap Legends of the Pacific win. Halen took the lead from Holloway on lap 13 before a red flag stopped the action on lap 14. Lincoln’s Jayson Elf went over the top of Aidan Phillips, ending Elf’s race and requiring attention from the safety crew before he was able to climb from the vehicle.

Halen topped Holloway by a scant .139 seconds at the stripe with Brendan Ruzbarsky finishing third. Kevin Travels and Bakersfield’s Josh Ayers rounded out the top-five.

Points leaders reigned supreme in the Mini Cups vs. Bandoleros with both Logan Chambers and Sam Wedehase picking up wins. For Bakersfield’s Chambers, the Bandolero triumph and overall win in the 20-lap affair was his fifth win in six starts. Wedehase of Kingsburg won his fourth Mini Cup feature and challenged within the Bandoleros, finishing third overall. The race included a serious crash on lap three when Linden’s Molly Laires flipped exiting turn two. She was fortunately uninjured.

Madera Racing on MAVTV airs Monday nights at 4:00pm Pacific. The second round of the Nut Up Pro Late Models airs on Monday August 2nd!