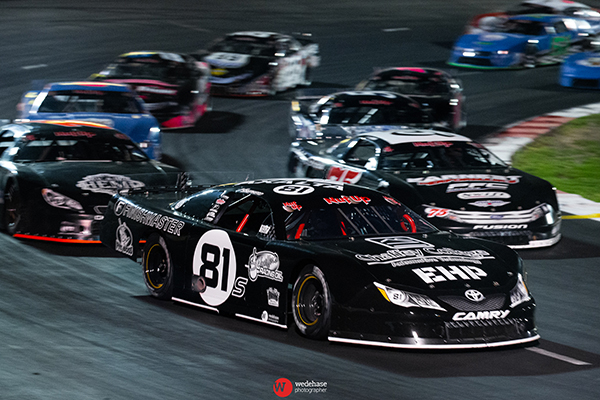 MADERA, CALIF. (September 29, 2020) – A competitive 2020 campaign of Nut Up Pro Late Model racing at Madera Speedway reaches its peak on Saturday night, with the eighth Short Track Shootout 150 for $10,000-to-win which also serves as the final round of the Race 2B Drug Free Big3. $4,500 will be on the line for the winner of the 30-lap B-Main along with numerous bonus awards courtesy of Race 2B Drug Free and 51FIFTY. Photo by Jason Wedehase

The grandstands will remain closed for the biggest stock car race in Central California of the year, but Mission Foods, 51FIFTY and Nut Up Industries will be present a free live stream of the event. Race fans can tune in to Short Track TV on YouTube at 5:20pm Pacific for the coverage at https://youtu.be/WIro_dqjQvM

Bakersfield’s Buddy Shepherd will aim at his second Short Track Shootout victory after winning in 2017. He also aims at the Race 2B Drug Free Big3 championship which pays $5,000-to-win along with preserving his lead in the Nut Up Pro Late Model championship. Saturday’s races serve as the eighth round of the nine-race series televised on MAVTV.

With the victory awarded to Ryan Philpott, the 2007 Altamont Raceway Park champion out of Livermore trails Doss by just six points in the Big3 championship battle. Philpott trails Shepherd by 65 markers in the overall Pro LM fight as well. Rounding out the top-ten in the Nut Up Pro Late Model standings are: Blaine Rocha in third, ahead of Ross Strmiska, Dylan Zampa, Shelden Cooper, 2019 champion Austin Herzog, Joey Iest, Glen Cook, and Jay Juleson.

Some of the Big3 bonus awards up for grabs include a $5,000 bonus for sweeping all three series’ fast-time awards, with Doss eligible after claiming quick-time in the first two rounds. Saturday’s 150-lap contest will be split across a 100-lap opening segment followed by a 50-lap sprint to the finish.

Also competing will be the 51FIFTY Jr. Late Model Series with their eighth 70-lap event of the year. The drivers ages 10-16 years old have chased 14-year-old Bradley Erickson of Phoenix, Ariz. throughout the season. Erickson has won four times along with four fast-times, leading Ukiah’s Cole Brown by 64 points in the championship. Brown broke the track record in the last event before finishing third. Jake Bollman, Kercie Jung, and Kabe McClenny round out the top-five.

The balance of the top-ten sees Brody Armtrout, Cassidy Hinds, Kale McClenny, Kasey Kleyn, and Robbie Kennealy in the hunt. The youngest stock car drivers in the West compete in a 40-lap opening segment followed by the Mission Racing Style Tortilla Chips halfway break. Following the break for adjustments and MAVTV interviews, the drivers battle for 30-laps to the finish.

11-year-old Jeffrey Erickson has had a perfect season in the Bandolero action at Madera, winning all seven main events. His advantage over Bakersfield’s rookie Caden Cordova is now 46 points with 2019 Mini Cup champion Joey Kennealy sitting 70 points out of the lead. Erickson may clinch the championship in the 30-lap race that also includes Mini Cups in a race-within-a-race. Tracy’s Rebecca Dubie has won six of the seven events for a strong point lead in that division as well.

Activities get underway on Friday with practice. Pit gates open at 2:30pm with the track open from 5:00pm to 9:00pm The final 45 minutes consistent of high groove practice only.

On Saturday, pit gates open at 10:00am with practice beginning at Noon. Qualifying will be at 2:00pm with the Mini Cup and Bandolero heat races and the $4,500-to-win Pro Late Model B-Main to follow. Opening Ceremonies and live racing on YouTube is scheduled for 5:20pm with all three features afterwards.