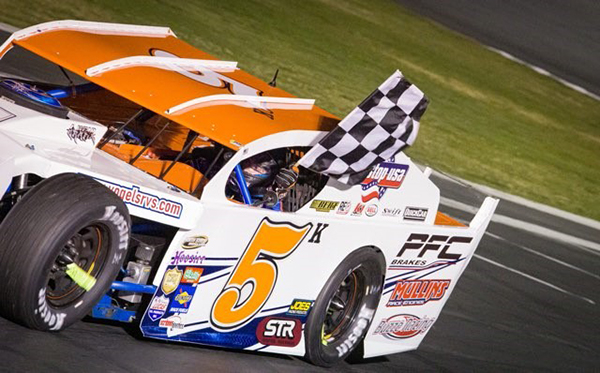 MADERA, CALIF. (May 8, 2021) – 2020 North State Modified Series champion Kyle Tellstrom of Ukiah charged from 18th starting position to win Saturday’s Mission Modified 60-lap feature at Madera Speedway. The victory paid a total of $2000 including a $1000 bonus from Economy Heating and Air after Tellstrom elected to start at the rear of the field. Photo by Joshua Rodriguez

“(It took a) little bit of patience. Man I’ve just had a lot luck here and a lot of success. This place has been so good to me. Fits my driving. Did what we had to do and stayed disciplined,” Tellstrom said. “Early there it was kind of rough. Once I got clear of a couple of cars, I got the right restart, got to the outside and it just opened up for me.”

A caution flew immediately at the start when Rich Cobb of Oregon spun with contact from Bakersfield’s Jim Coffey while Chris Lyon of Greely Hill also spun. When action resumed, Coffey went around the outside to lead lap one. Dustin DeRosier of Cloverdale worked to the inside and took the lead on lap four. Cobb and Utah’s Jeff Longman spun in turn one for a caution on lap six.

DeRosier battled side-by-side with Ian Elliott of Lakeport for the lead but held the position. 2002 and 2003 Madera Modified track champion Scott Winters of Tracy passed Hesperia’s Eddie Secord for third. Tellstrom advanced to sixth by the 17th lap. He then went two-for-one on the inside of Secord and 2020 Roseville and Ukiah champion Jason Philpot of Sacramento to grab fourth.

The top-four went two-by-two with Elliott sweeping around DeRosier for the lead on lap 24. Tellstrom went upstairs to follow him into second as well. A caution flew on lap 27 for Mike Nielson spinning in turn one. Elliott chose the inside for the restart and Tellstrom immediately took over the lead. The caution fell once more for Longman spinning on the front stretch on lap 29.

Winters advanced to the second position but couldn’t capitalize on a late restart to challenge for the victory. Tellstrom won by 1.791 seconds over Winters, Elliott, DeRosier, and Philpot. Philpot won a $750 bonus as the top finishing GM 602 Crate Engine, persevering over a long battle with Keith Bloom, Jr. Secord won $500 as the second highest finishing crate with Kern County Raceway champion Jim Coffey earning $250 for tenth place and the third place finisher among the crates.

Jason Aguirre of Atwater won his third Madera Late Model feature of the season in a 40-lap affair. Las Vegas’ Kyle Keller led the opening 14 laps of the event while Aguirre searched for a racing line. Aguirre adjusted to the outside line and started to run down Keller. Keller went high as well, with Aguirre moving low into turn one to take the lead exiting turn two.

Aguirre led lap 15 before a caution flew on lap 16. On the restart, Erickson tried the inside line but was unable advance past Keller throughout the final 24 circuits. Aguirre topped Keller, Erickson, Aaron Mullins, and Richard Herzog as the top-five.

Gonzales stormed through the pack to move quickly into third, then used a lap 26 restart to get second over Nick Rowe. Gonzales made a bid for the win off turn four coming to the checkered flag, with Wren surviving by a nose for victory. Large finished third over Lawton and Rowe.

Dan Myrick led all 20-laps for the Mini Stock victory. Several entries from the West Coast Sport Compacts joined the division for a competitive race. Greg Baronian used an outside maneuver to take over second on lap 17. Randy Brown, Damien Leininger of Bakersfield, and Jeff Durant rounded out the top-five finishers.

MAVTV-televised Nut Up Pro Late Models, 51FIFTY Jr. Late Models, Mini Cups vs. Bandoleros, and Challenge Cup are up next at Madera Speedway on May 22. Tickets will be available on MyRacePass and on www.RaceMadera.com