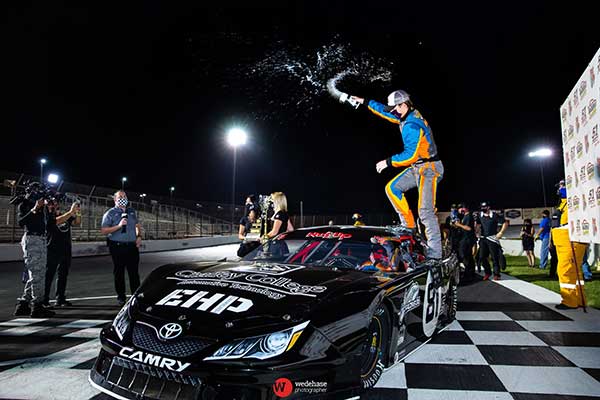 Shepherd started the 80-lap contest in fifth after setting his fifth fast-time of the year in time trials. Shelden Cooper drew the pole and led the opening lap. Livermore’s Ryan Philpott used the outside to lead lap two with Shepherd moving to second by the third lap.

Philpott picked the outside after a lap seven caution, with Shepherd running underneath him. Shepherd used the inside to take the lead on lap 11. After a caution on lap 12, two-by-two racing ensued for the second position. A caution flew on lap 19 when Cooper spun from the sixth position with brake issues. Logan Zampa surrendered a top-five when he retreated to the pits after running over the brake rotor.

Shepherd paced the field through lapped traffic beginning on lap 35. 2019 51FIFTY Jr. Late Model champion Joey Iest of Madera stopped on the front stretch for a caution on lap 46. The stoppage ended up bringing the lap 50 break to fruition four laps early. After MAVTV-interviews and car adjustments, racing resumed with 2019 Nut Up Pro Late Model champion Austin Herzog and 2019 Madera Late Model champion Jason Aguirre each passing Philpott around the outside line to take second and third.

A caution on lap 61 involving Utah’s Jeff Hillock gave Herzog the track position to go past Skoglund for second. Philpott grabbed a piece of the front stretch wall while close racing continued throughout the top-five to the finish. Shepherd led Bischofberger, Herzog, Skoglund, and Aguirre as the top-five finishers. The victory is Shepherd’s 14th in MAVTV-televised competition at Madera allowing him to claim his third track title.

Bradley Erickson also won both the title and the season finale race, in a lucrative 70-lap event for the 51FIFTY Jr. Late Models presented by Frank’s Radio Service. Each of the top-five finishers earned $1000 and the hard charger earned $500, among the notable prizes in the nearly $10,000 event.

Bakersfield’s Kercie Jung led the 21-car onslaught of drivers ages 10-16 years old in time trials then pulled the pole for the feature. Erickson started outside pole and immediately pounced into the lead. Jung went back-and-forth with Bakersfield’s Seth Wise – winner of the first two races of the year -throughout the race. Wise restarted fourth on lap 13 but used the outside line to advance to second past Ukiah’s Cole Brown.

A yellow flag on lap 17 set up a restart that led to the largest crash of the night. Over half a dozen cars were involved, ending the night for Brody Armtrout of Smartsville, Jake Bollman, and Colorado’s Holly Clark.

Kale’s older brother Kabe was involved in a grinding crash on the backstretch with Cody Kiemele of Riverside, ending the opening 40-lap segment four laps early on lap 36.

After the Mission Racing Style Tortilla Chips break for adjustments and MAVTV interviews, Erickson continued to lead the field while Jung looked outside of Brown for second. After a yellow flag on lap 41, Brown managed to use the inside of Erickson to nab the lead on lap 44. Erickson led lap 45 before Brown made the decisive pass on lap 46 exiting turn four.

Wise and Jung collided for a caution on lap 57 in turn two, relegating both drivers to the rear of the field. A spin for Lane Anderson on the backstretch set up a five-lap shootout between Brown and Erickson. The top-two in the championship raced for the round nine win, with Brown picking the outside. Erickson slid up the hill with Brown on multiple occasions in the side-by-side duel, with Erickson leading lap 68.

Erickson led the final three circuits for the victory while Brown narrowly fended off Kale McClenny for second. Colorado’s Cassidy Hinds and a hard-charging Jung rounded out the top-five. Erickson’s fifth win of 2020 gave him the championship while Brown finished second in the standings. Jung unofficially claimed third in the final tally.

Jeffrey Erickson won his ninth consecutive race to wrap up a perfect season in the Bandolero division. Both second in points Caden Cordova of Bakersfield and third in the points Joey Kennealy failed to finish the event with mechanical issues. Nathaniel Edwards and Trenton Eurto rounded out the top-three. Tracy’s Rebecca Dubie won the Mini Cup championship at the conclusion of the 30-lap race.