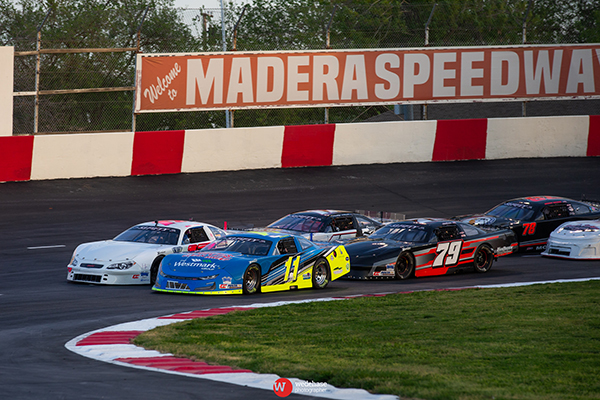 Ticket information can be found at: http://racemadera.com/ticket-info.html with online sales available through MyRacePass. Tickets can also be purchased at the gate. Race fans can also view the live streaming coverage on Short Track TV on YouTube beginning at 5:00pm Pacific.

“The past few months have been exciting,” Lewis said. “I’m humbled to have the opportunity to race at Madera, a track that Ron Hornaday, my mentor, has history at. I want to thank Ron, Austin (Theriault) and everyone else who has helped put this opportunity together. I can’t thank Barrett Polhemus enough for letting me race his car and I know Charlie Wilson is going to have it tuned up for me. It’s great that all my friends, family and sponsors will be able to watch the race on MAVTV back home.”

The Turkey Triple Open for Pro Late Models will be a one shot, 100 green flag lap contest.

The Challenge Cup Series event will have intrigue as well, as the 3400 pound cars with over 600 horsepower compete in a 75-lap race on the one-third mile. Auburn’s Thomas Martin will carry a throwback scheme that harkens back to the No. 14 cars of Bobby Allison and Tony Stewart. Madera Pro Late Model regulars such as Jay Juleson and Matt Erickson are expected to compete along with other Challenge Cup regulars Vince Little, Justin Funkhouser, and 14-year-old Connor West of Roseville in his series debut.

Modifieds and Hobby Stocks each race for 75-laps in the Turkey Triple Open. The Hobby Stock competitors will have their targets set on 2021 champion Manny Gonzales, Jr.

Action gets underway on Friday with practice from 5pm until 8:45pm with pit gates opening at 3pm. On Saturday, pit gates open at noon with practice at 2pm. Qualifying hits the track at 3:45pm. Short Track TV goes live at 5:00pm with opening ceremonies and the four features to follow.