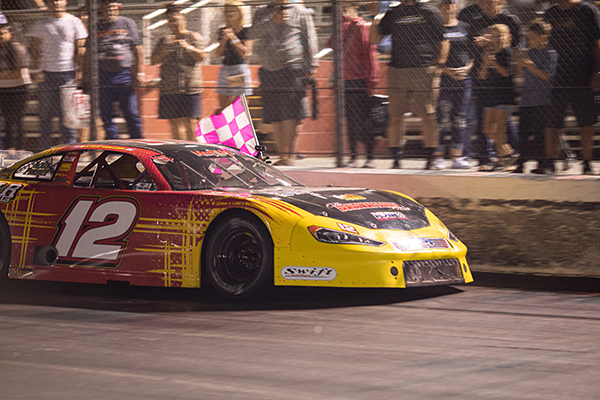 Keller started alongside Bakersfield’s Seth Wise for the 150-lap affair. The field of 26 starters was narrowed from 31 qualifiers through a 30-lap B-Main event.

Wise led the opening two circuits from the inside groove before Keller drove past on the outside to lead lap three. Walbridge and Matt Erickson were some of the few cars trying to make progress from the inside line in the early stages. Erickson eventually drifted from his fifth starting position to ninth.

Fast-time qualifier Racin Vernon of Bakersfield drew the nine card in the redraw, but had advanced to fifth by lap 19. Keller and Wise ran nose-to-tail as they approached traffic on lap 21. Erickson tried to reload as he looked inside Jason Aguirre for seventh behind them.

Wise showed his nose to Keller before the first caution on lap 44 for Glen Cook spinning in turn three. Keller restarted outside of Wise, allowing Vernon to charge into second on the outside line as well. 14-year-old Ethan Nascimento of Manteca also looked outside Wise, but Wise successfully defended third.

Bakersfield’s Kercie Jung went up in sparks with a flat right front for a caution on lap 49 in turn three. The restart saw a mad scramble as Vernon went up the race track. Walbridge spun around backwards on the front stretch after contact from Howard Holden. Walbridge completed a 360-degree spin in front of the field yet was never contacted, dropping back to tenth position while the race remained green.

Carlos Vieira and Nascimento suffered a hard crash in turn three to end their evenings for the next caution flag on lap 74. The outside line was rolling on the restart, with Wise slipping back to fourth behind Keller, Howard Holden, and Erickson. $1,000 B-Main winner Brody Moore of Colorado emerged in fifth after starting 17th.

A caution for Cook spinning on lap 97 brought the race to its scheduled break three laps early with Keller leading Holden, Erickson, Wise, and Moore. Texan Barrett Polhemus spun on the restart after the break and collected Aguirre, ending both of their races with damage. Wise ended up sliding into the infield in turn one after jostling for position but rejoined the field at the tail of the order.

Erickson tried to pass Holden on several different occasions for second, allowing Keller to pull ahead by a large margin. Erickson cleared Holden in turn two on lap 117 with a 2.2 second gap to make up on the leader. Linny White collided with Vernon exiting turn four in a three-wide battle for third on lap 130 requiring a caution. The caution erased Keller’s advantage, giving Erickson a look inside on the restart. Erickson spun the tires however and fell to third behind Moore as the green flag flew.

Keller was never opposed again in the closing laps, taking the coveted $10,000 victory in the Nut Up Short Track Shootout. Moore finished second with Erickson third. Wise passed Holden for fourth with 11-to-go. A seventh-place finish clinched the championship for Jadan Walbridge as well.

Madera Robbie Kennealy became the latest winner in the 51FIFTY Jr. Late Model Series while Smartsville’s Brody Armtrout pulled off a come from behind championship on Saturday night. The 70-lap race for drivers ages 10-16 years old had drama to the last lap with Armtrout and incoming points leader Jacob Smith of Eagle, Idaho.

Loomis Kenna Mitchell led the first three circuits from the pole position before Kennealy took over. A fast-paced opening 40-laps saw Kennealy leading at the break. Mitchell held off Bakersfield’s Kercie Jung for second while Armtrout showed patience in his battle with Riverside’s Cody Kiemele for fourth. Smith’s lead over Armtrout was just two points after the break as he ran seventh at the conclusion of the segment.

Kennealy and Kiemele used the outside line on the restart to run first and second. An extended red flag came out for water on the track in turn two. When action resumed, Kennealy picked the outside of Kiemele to maintain the lead. Barrett Polhemus used the outside to take over second. Armtrout battled with Mitchell for third while Smith battled with Jung for seventh in a battle for who would win the championship. A multi-car crash in turn one involving Ethan Nascimento, 2020 Bandolero champion Jeffrey Erickson of Phoenix, and Colorado’s Holly Clark set up a green-white-checkered finish. The points leaders were tied in the standings as they drove to the green flag.

The top spot belonged to Kennealy again while Armtrout made a bid on the outside to take over the second position. The exciting shuffling of the deck saw Smith knocked back to ninth at the checkered flag. Kennealy grabbed his maiden win in the 51FIFTY Jr. Late Model Series and Brody Armtrout won the championship from second position. Mitchell earned a career-best third followed by Polhemus and Jung.