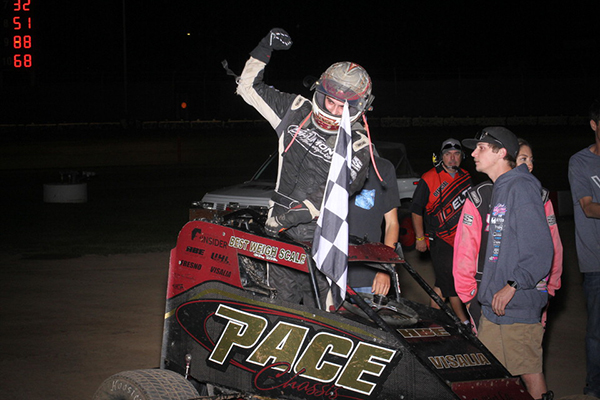 STOCKTON, CALIFORNIA (October 22, 2019) – With the 2019 Delta Speedway presented by Financial Center Credit Union championships decided, the attention of the Micro Sprint racing world will turn to Turkey Bowl XIX this Friday and Saturday. The best in the west will be competing with Saturday’s features paying $2,000 to win in both Super 600 and Non-Wing while Restricted will duel for $1500 to win and Jr. Sprints will race for $750 for the victor.

Turkey Bowl XIX is the largest event of the year at the 1/7th mile dirt oval track located at the San Joaquin County Fairgrounds. The race format requires drivers to race their way into the show with no time trials, adding to the intrigue. Friday’s activities include drivers’ meeting at 5:30 p.m. followed by hot laps and each driver competing in two heat races for their positions for Saturday. Saturday’s drivers meeting is set for 4:30 p.m. with lower mains and the championship features.

Friday’s races will conclude with the inaugural Delta Speedway Knock-Out Races to determine the starting lineup for Saturday’s Super 600 and Non-Wing features. The top 16 in both the Supers and Non-Wings will be eligible, however, the fans draw will determine how many get to participate in each knock-out race. Races will be run in a series of five lap segments with eliminations pursuit style until a duel to a finish for last remaining cars. Restricted lineups will be set in part by a pole shuffle on Saturday night as well.

Friday’s activities will be capped by a driver & crew appreciation BBQ presented by C&P Promotions. Dinner will include Lockeford sausages, baked beans, and a side salad. Racers are encouraged to bring a dessert or side dish.

Only one of the defending Turkey Bowl champions has a feature win at Delta in 2019. Tj Smith won the 2018 Non-Wing feature and has two wins this season. Coalinga’s Ben Worth is the defending Super 600 champion while Caeden Steele claimed Restricted in 2018. Dalton Parriera was the Jr. Sprint winner in 2018.

The biggest story of 2019 was undoubtably Stockton’s Caden Sarale winning both the Non-Wing and Super 600 track championships for only the second sweep in track history. Sarale won the 2015 Restricted Turkey Bowl and track title in the same year, as he did in 2013 when he won both the big race and the points in 5/8ths Restricted. That past success could be a harbinger of things to come this weekend.

Mitchel Moles finished second to Sarale in the Super 600 points and has been on a tear up and down California this season. One of the few things missing from Moles’ trophy case is a Turkey Bowl win and he’ll have opportunities in both Super 600 and Non-Wing. Turkey Bowl wins have eluded two-time track champion Travis Labat and Raio Salmon as well. Nikko Panella is a two-time Turkey Bowl winner who also will be on the hunt in Super 600.

Sarale joined Brandon Carey in the record books for Delta Speedway track championship sweeps. Carey finished second in Non-Wing points this season and has twice scored Turkey Bowl victories. Chad Laughton finished third in the Non-Wing battle this season without a win. A $2,000 Turkey Bowl win would be a strong way to cap a consistent season for the Turlock driver.

None of the top-ten in the standings for either Restricted or Jr. Sprints has a Turkey Bowl win. Madera’s Logan Trevino outlasted Elk Grove’s Devon Courtnier for a narrow championship this season in Restricted. Jade Avedisian, Jeffrey Pahule, Jr., and Gauge Garcia rounded out the top-five in the standings. James Andrichuk also had a main event win this year from seventh in the points. Lucas Mauldin had an outstanding season in Jr. Sprints with eight wins to top Kyle Fernandez, Colton Key, Andy Hintz, and TK O’Brien.

Friday heat race action earns points to set the starting lineups for Saturday’s features. Entry is $125 per car and driver for the weekend and $25 per day for pit passes. General admission tickets each night are $10 for adults, $5 for seniors, military, and children ages 6-12, and kids 5 and under are free!

Racing action will be streamed by Dirt Oval TV. Each night is $15 or $25 for a two-night pass. Visit www.DirtOvalTV.com to order in advance.