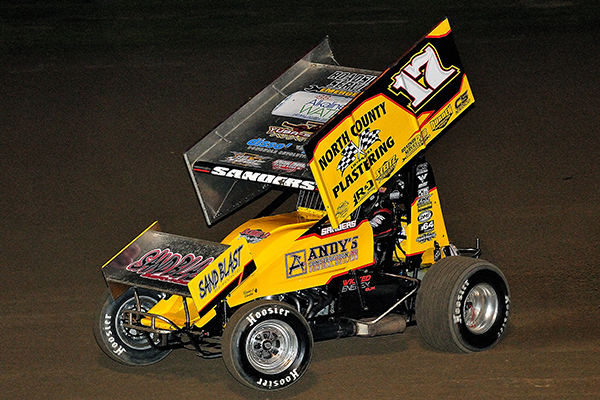 WATSONVILLE, CALIF. (April 2, 2021) – 2015 Ocean Sprints presented by Taco Bravo champion Justin Sanders continued to add to his accomplishments in the 360 Sprint Car Series, winning his second consecutive feature on Friday night in Watsonville. Sanders’ win equals his win total from a partial campaign in 2020, setting a strong start to his season at the Ocean Speedway.

“(It was) a lot of me getting lucky honestly. I got lucky when Bud missed the rubber. I got lucky with Madjic drove over the lapped car. Everything fell my way but I really wasn’t that good at all. Happy to get the win but just have to go back and get some more drive out of it,” Sanders said.

Redding’s Chase Madjic led the feature from the pole before Fresno’s Corey Day picked up steam on the outside. Day nipped Madjic at the line to lead lap three but the move was nullified by a caution for Max Mittry stopped on the backstretch.

When action resumed both Sanders and 2020 championship runner-up Bud Kaeding moved past Day for second and third. Kaeding edged inside of Madjic to lead lap five with Sanders then going outside Madjic to take second.

The leaders encountered lapped traffic on lap 12 with Madjic immediately re-entering the picture. Madjic made a quick move to nab the lead into turn one, leading lap 13. Exiting turn four to complete lap 17, Madjic and his teammate Mittry made contact which allowed both Sanders and Kaeding to go by before the caution waved. Madjic drove through the infield and rejoined in fifth, surrendering the top position to Sanders.

Multi-time Ocean Sprints champion Shane Golobic of Fremont drove from 18th starting position into the top-ten before retiring after a spin on lap 19. Sanders reached lapped traffic again with two laps to go and tip toed to lead Kaeding by .241 seconds to win the feature. Day finished third followed by ninth starting Tanner Carrick of Lincoln and tenth starting Mitchell Faccinto of Hanford.

2020 championship runner-up Jim Pettit II returned to victory lane at Ocean Speedway by taking the 25-lap IMCA Modified contest. Matthew Hagio of Prunedale led the first lap from the pole position before fellow Prunedale driver Pettit muscled past him to lead the second lap. Former champions Austin and Cody Burke advanced from the fourth row into the top-five by the third lap. The top-four cars of Pettit, Hagio, Cody Burke, and Andy Orbertello ran closely for much of the race.

A caution on lap 22 set up a three-lap run to the finish but Pettit came out on top. Cody Burke, Hagio, Orbertello, and Robert Marsh followed Pettit at the finish.

Brentwood’s Fred Ryland won the 20-lap IMCA Sport Mod feature after winning his heat race earlier in the night as well. Ryland started fourth but was the leader by the end of lap one. Ryland successfully defended a few challenges from Atwater’s Tyler Thomas who finished second. Dennis Simunovich, Randy Miller of San Jose, and Mark Garner rounded out the top-five.

2019 Hobby Stock champion Rob Gallaher held of 2020 champion Joe Gallaher for Friday’s 20-lap win. Rob Gallaher battled back-and-forth with Santa Cruz’s Terry Campion throughout the first half of the event with numerous side-by-side duels for the lead. Campion eventually fell out of the event on lap ten.

The Gallahers raced hard over the final ten laps, including a five-lap shootout after a caution for a crash involving Bobby Gallaher and Quintin Harris on the backstretch. Rob Gallaher persevered to win over Joe Gallaher, Jerry Skelton of Watsonville, Tony Oliveira of Watsonville, and Ryan Muller of Santa Cruz.