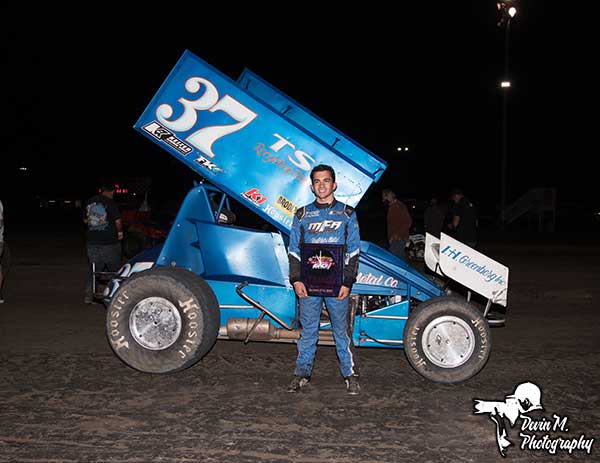 (October 18, 2020 by Gary Thomas) – Hanford, California’s Mitchell Faccinto had been oh-so-close to Ocean Sprints victory lane in the past, before he finally checked it off his list over the Summer. On Saturday night he returned and added another, only this time it was at the prestigious Johnny Key Classic, as he tallied one of the biggest victories of his career aboard the Western Metal Company No. 37 mount. Photo by Devin Mayo

Faccinto earned $3,000 for winning the Winged 360 Sprint Car main event with an extra grand coming in courtesy of Williams Roofing. He also took home $300 for leading the third lap of the dash, courtesy of El Dorado Hills Landscape and Design.

Also picking up wins at the 60th running of the Key Classic were Cody Burke with the IMCA Modifieds, Darren Thomas with the IMCA Sport Mods, Joe Gallaher with the Hobby Stocks and Ryan McClelland with the Four Bangers. The closest race of the night came with the Hobbies, as Gallaher just nipped Sam Kennedy at the Ed Entz checkered flag.

“It feels great to win the Johnny Key Classic tonight,” Faccinto commented. “The track changed pretty quick and I wasn’t quite sure which line to run, but once Shane Golobic showed me his nose, I knew I had to step it up. We have been close to several wins here and it felt awesome to finally do it back in July. To get another victory at the Key this evening is special for the entire 37 team. I can’t thank the Greenburg family and everyone that helps us out enough. This is a night we won’t forget, that is for sure.”

A total of 103 race cars packed into the Ocean Speedway pit area for the 60th running of the Johnny Key Classic. Championship night will now invade the quarter-mile on Friday November 6th featuring the Ocean Sprints presented by Taco Bravo, IMCA Modifieds, IMCA Sport Mods, Hobby Stocks, Four Bangers and the Western Midgets. With the grandstands still closed all the action can be seen via FloRacing.