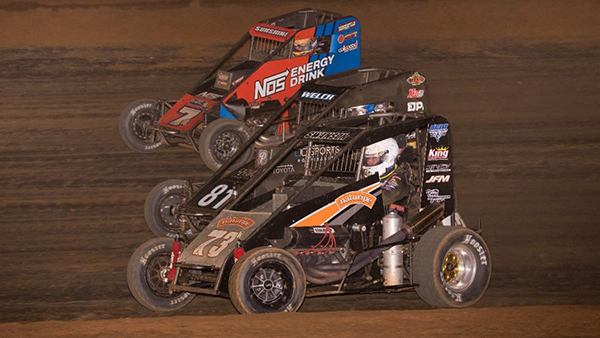 (November 10, 2020 from USAC PR) – The schedule for the USAC NOS Energy Drink Midget National Championship’s season-ending west coast trip in the month of November will have another new look with the announcement of the cancellation of the Hangtown 100 at Placerville (Calif.) Speedway and the addition of two events at Merced (Calif.) Speedway on Nov. 20-21. Photo by Devin Mayo

Hangtown 100 promoters Matt Wood and Scott and Kami Russell were forced to announce the cancelation of this year’s three-night event. Recent state geographic limitations due to COVID-19 pertaining to who can attend as to not only fan, but also participants, has necessitated this action. Refunds will be processed immediately and registration credits from the BCRA race held will carry over to next year.

With the addition of the two events, the 2020 USAC NOS Energy Drink National Midget season will now conclude at Merced on Nov. 20-21. The event at Merced will pay 50 appearance points to all licensed competitors each night toward the championship standings. No spectators will be allowed at the Merced events which will air live on FloRacing.

On Friday, Nov. 20 at Merced, the USAC NOS Energy Drink National Midgets will be joined by the Hoosier Tire Wing 360 Sprint Cars presented by www.onefasttee.com. On Saturday, Nov. 21, USAC NOS Energy Drink National Midget action at Merced is teamed with the BCRA Midget Lites and Hobby Stocks. Both night, pit gates open at 1pm PT, with the drivers meeting at 5pm and cars on track at 5:30pm.

Meanwhile, the previously scheduled non-point special event at Merced for Nov. 25 has been canceled.

Tyler Courtney (Indianapolis, Ind.) holds a 15-point lead in the series standings entering the five-race set in November as he looks to defend his title. Chris Windom (Canton, Ill.) stands second behind Courtney as he pursues his first Midget championship and the completion of USAC’s National Triple Crown after previously winning Silver Crown and AMSOIL National Sprint driving championships in 2016 and 2017, respectively.

Tanner Thorson (Minden, Nev.), the 2016 USAC Midget champ, is third in the standings (-78) with Buddy Kofoid (Penngrove, Calif.) and Cannon McIntosh (Bixby, Okla.) rounding out the top-five at the moment.