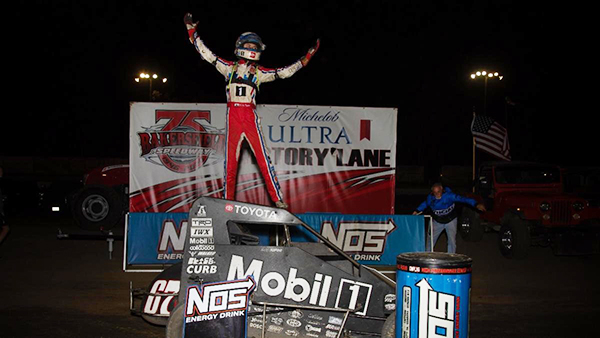 (November 18, 2020 from USAC PR) – Coming up through the ranks in the earliest years of his racing career, Buddy Kofoid idolized Kyle Larson. In recent years, Kofoid has gotten the opportunity to compete head-to-head with Larson on occasion in midgets and sprint cars.  Photo by Rich Forman

The fact that Larson was someone he looked up to and was also his teammate was no deterrent in Kofoid’s desire to go toe-to-toe with Larson and defeat him. That he did, ultimately prevailing in a spirited duel that lasted the entire duration of the second half of the 30-lap event, with the winning move made just four laps from the finish.

“I can’t believe we just beat Kyle,” Kofoid exclaimed. “Kyle is one of the best in the world and really good in midgets. As a younger kid coming out of California and racing Outlaw Karts, I always looked up to him. Everyone already knows how good he is, and racing with the best helps you become better.”

Meanwhile, behind the race for the win was the race for the 2020 USAC NOS Energy Drink National Midget championship point lead. Chris Windom emerged ahead of Tyler Courtney in the standings by one single point at the checkered after charging from 20th to a 6th place finish following a wildly contentious final lap.

Kofoid lined up 5th in the 24-car field while Larson was slotted outside the front row, making it a fairly tall task for the Penngrove, Calif. Rookie who was, nonetheless, game for the challenge. Larson withstood a pair of uppercuts served his way via polesitter Chase Johnson who slid his way to the lead briefly on the opening two laps in turn one before Larson cut back under to grab the lead each time off turn two.

Kofoid raced to third by the second circuit, then traveled high and low around the 1/3-mile dirt oval to reach his way to the second position past Johnson on the 15th lap.

In the thick of the race through traffic, Larson held the upper hand over Kofoid by a two-plus second margin when KKM teammate Daison Pursley flipped in turn two on the 19th lap. He was uninjured.

The tide began to turn when racing resumed and Kofoid went on the offensive, slide jobbing Larson right off the bat in turn one. Larson answered by crossing over and trekking back under Kofoid as the two headed side-by-side into turn three. Larson muscled Kofoid off the low line, but Kofoid returned to the front with a cutback underneath Larson exiting turn four.

The slider swapping continued between the two on the ensuing lap, with Larson able to get back by with a down and under maneuver past Kofoid in turns one and two, then closed the door at the entry on the bottom of turn three. However, with the red flag displayed for a Kaylee Bryson turn two flip on the 21st lap before the lap was scored, Kofoid reassumed his position at the head of the field with Larson just behind.

Twelfth-running Thomas Meseraull found trouble on the first lap 21 restart when his mount received heavy front-end damage, forcing him to a stop near the turn three outside wall, and out of the race.

Back and forth they went with Larson able to find an answer for every strike Kofoid delivered. But with four laps to go, leading man Larson beelined to the bottom of turn three where he made a rare error, which scooched him up to the middle of no man’s land and losing momentum, while Kofoid raced around the outside to put his name atop the leader board.

Larson made one final run at Kofoid on the final lap in turn four but Kofoid was unfettered in closing out his 0.552 second victory over Larson.

“We’ve been really strong as of late and the team gave me a hell of a car,” Kofoid stated of his Keith Kunz-Curb-Agajanian/Mobil 1 – JBL Audio – TRD/Bullet By Spike/Speedway Toyota. “I had an issue with that last restart when he got the lead back and I kind of stumbled. I figured out what I needed to do and, man, that was a lot of fun.”

For Larson (Elk Grove, Calif.), his first event driving for KKM since Pennsylvania Midget Week in 2019 was a reunion of a combination that has won 15 times together in USAC National Midget competition between 2011-19. The first time back resulted in Larson leading a race high 24 laps and nearly pulling off the victory in his Keith Kunz-Curb-Agajanian/IWX – JBL Audio/Bullet By Spike/Speedway Toyota.

Larson, however, did continue his incredible streak of top-two finishes with the series that has now endured for 10 consecutive series starts dating to the west coast swing of 2019, a streak which includes seven wins and three seconds in that span.

“It was a lot of fun to get back with this team and Keith Kunz,” Larson said. “It’s been a year and half since I’ve raced with them. It was fun to get back in the seat and thanks to all of them for allowing me to run their car.”

“Whenever you have an exciting race like that, it’s hard to be disappointed about a second,” Larson continued. “I just made a mistake. I thought I could go to the bottom there and just try to change up the rhythm the run and the race there, but I just got in, got to the brakes and stalled, and that cost me. I just hate that I made a mistake there, but I had a lot of fun racing with Buddy.”

Chris Windom emerged ahead of Tyler Courtney in the standings by one single point at the checkered after charging from 20th to a 6th place finish following a wildly contentious final lap. He leads the points entering this Friday and Saturday night’s races at Merced (Calif.) Speedway on Nov. 20-21, both of which will pay 50 appearance points to all licensed USAC National Midget drivers and teams, regardless of performance, all but ensuring Windom’s series crown.

The other storyline throughout was Windom’s 11-point lead was in severe jeopardy with him starting 20th in the feature while championship nemeses Tyler Courtney (-11) and Tanner Thorson (-32) started 3rd and 6th, respectively.

While Courtney and Thorson remained stalwarts inside the top-five, Windom was mired in 13th prior to the final restart with 10 laps remaining when he turned up the wick and elevated himself to seventh by the final lap. With Courtney running third at that moment in time, Windom needed to move up one more spot in order to move himself into the point lead, a final two-lap tussle between he and Ricky Stenhouse Jr.

“At that point in time, I don’t know anyone in the pit area is going to sit there and run 11th in the last race of the year knowing what’s at stake and what everyone has worked for all year,” Windom continued. “I turned it up, and it was so hard to get by guys. Restarts were crucial. You could slide one or two guys in one corner on the restart and you could hold those spots and that’s what I kept doing restart after restart. I was trying to see how far Tyler was ahead of us, I saw it was two, it was three, it was four, then back to three, and I just raced as hard as I possibly could until the end.”

That’s when Windom encountered a seesaw, all-out war between he and Stenhouse – Courtney’s Clauson-Marshall Racing teammate – for the coveted 6th spot on the final lap in turn four.

“I slid Ricky on the white flag lap, and he crossed me over and dove to the bottom,” Windom recalled. “(On the last lap), I was going to the bottom as hard as I could and drove into the back of him and he spun around. I got into him there, but I saw the position, and that was what I needed, one more spot to secure a triple crown. It was a split-second decision and that’s what happened.”

While Windom hasn’t exactly clinched the title, there are but two races remaining in the 2020 season this Friday and Saturday night, November 20-21 at Merced (Calif.) Speedway, both of which will pay 50 appearance points to all licensed USAC National Midget drivers and teams, regardless of performance, all but ensuring Windom’s series crown.

That places Windom in the enviable position as the point leader entering the Merced events, putting him in the driver’s seat of becoming the seventh member of the Triple Crown club of drivers who’ve won USAC Silver Crown, National Sprint and National Midget driving championships in their career along with Pancho Carter, Tony Stewart, Dave Darland, J.J. Yeley, Jerry Coons Jr. and Tracy Hines.

“This is what I’ve worked my whole career for,” Windom said. “The way the racetrack was tonight, we buried ourselves by not qualifying well. It was so hard to pass in the feature without throwing huge slide jobs on guys, and that’s what I had to do to get to the front and get us back into contention.”

Tyler Courtney, who now trails Windom by one point entering Merced, was a man of few words. The 2019 USAC NOS Energy Drink National Midget champ has been on the other side in USAC National championship point battles, winning the 2018 Sprint Car title based a tiebreaker after he and Kevin Thomas Jr. ended the season deadlocked with the same amount of points. This year, it appears the Indianapolis, Ind. native will come up just short, equaling the narrowest margin between first and second in a championship, one, set by Cole Whitt over Tracy Hines in 2008.

“I think we just came up one spot short, not even a spot, a point. That’s frustrating, and it sucks, it really does,” a deflated Courtney stated after finishing third in his Clauson-Marshall Racing/NOS Turbo – ZMax/Spike/Stanton SR-11x.