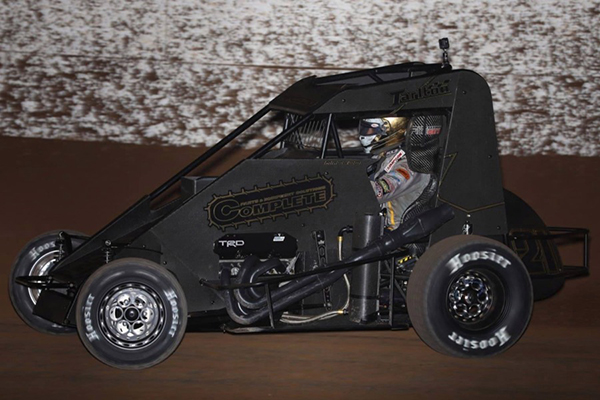 (October 29, 2020 by Lance Jennings) – Just added to the schedule! The USAC Western States Midgets are back in action this Friday, October 30th, at Hanford’s Keller Auto Speedway. Promoted by Peter Murphy, the non-point “Inaugural Tom Tarlton Classic” will pay $2,100-to-win and $200-to-start. The action packed card will also showcase the winged Kings of Thunder 410 Sprint Cars. The Pit Gates will open at 1:00pm and pit passes are $40. The GRANDSTANDS ARE CLOSED, Practice starts at 5:45pm, Time Trials is scheduled for 6:00pm, and Racing will begin at 7:00pm. For event information, visit the track’s website at racekingsspeedway.com. Floracing.com will broadcast a pay per view live stream over the internet. Photo by Rich Forman

As this writing goes to press, the event will be one of the richest dates on the calendar. In addition to the $2,100 top prize, the fast time award pays $200, a special dash will pay $500, and $200 will be awarded for hard charger. Thanks to everyone behind the scenes for supporting a great night of racing.

To limit person to person contact during the night, all USAC racers must purchase their license / membership ahead of the event at usacracing.com or usaclicense.com. In addition, the entry fee will be taken from the night’s winnings.

Since June 6, 1986, the Kings County Fairgrounds has hosted 42 USAC Western States Midget races and twenty-eight different drivers have claimed victory. Robby Flock scored the inaugural victory and Ronnie Gardner topped the last visit on June 25, 2016. Billy Boat leads all drivers with six Hanford triumphs and Ronnie Day set the 1-lap qualifying track record of 15.555 on October 3, 1998. The series win list at Hanford is at the end of this release.

Keller Auto Speedway is located at 801 South 10th Avenue in Hanford, California at the Kings County Fairgrounds. Due to the local health department regulations regarding the COVID-19 Coronavirus, the GRANDSTANDS ARE CLOSED for the event but pit passes are available. Camping is available on the fairgrounds and for more event information, visit racekingsspeedway.com.