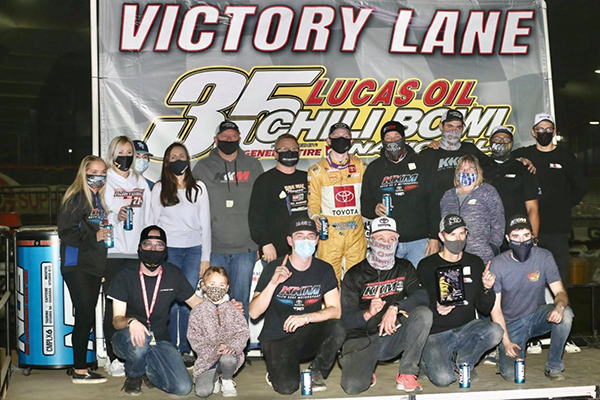 (January 11, 2021 by Bryan Hulbert) – A statement win for Cannon McIntosh on Monday night, the Bixby, Okla. shoe opened the 35th annual Lucas Oil Chili Bowl Nationals presented by General Tire by wheeling the Keith Kunz Motorsports-Curb-Agajanian No. 71k to his second Cummins Qualifying Night victory in as many years.

“I really didn’t think I was going to be able to do it again, but you just have to believe, and as the night went on, I started to believe more and more that I could do it and just told myself to be patient and be consistent, and that’s what it took to win tonight,” stated Cannon when asked about his temperament going into the Monday opener.

Handing Keith Kunz his 30th A-Feature win as a car owner atop Tulsa Expo Raceway clay, the eighteen-year-old battled early on with Ryan Bernal. Swapping lines with the No. 87w, Cannon gained the edge on Lap 4. Stalked by Tyler Courtney, who took over second a lap after McIntosh took the point, the No. 7c commenced to slide-jobs through several mid-race restarts.

Able to keep the NOS Energy Drink Turbo entry at bay, the pair ran varying lines as the race worked into the closing laps. Making moves on the restarts, 12th starting Blake Hahn was suddenly in the mix with nine laps to run after third through seventh traded hands almost non-stop through the four previous laps.

Caution working Lap 22, Hahn had pulled even with Courtney for runner-up honors prior to the Whelen lights coming on.

Showing Tyler the line, the restart saw the Clauson-Marshall Racing entry vacate the cushion to protect the transfer spot. Nearly getting a run on the leader, Cannon likewise adjusted his line to the bottom in three and four while still sailing the cushion in one and two.

Starting to pull away through the final five laps, McIntosh found the checkered flags with a 1.446-second margin over Tyler Courtney. Third went to Blake Hahn with Chris Windom and David Gravel making up the top five.

Advancing seven positions, sixteen-year-old Jacob Denny was the night’s highest finishing Rookie of the Year contender. Chase Briscoe was seventh, with Tim McCreadie getting his fill of soup with a run from fifth in the C-Feature to eighth in the A-Feature. Trey Marcham moved up eight positions to finish ninth with Carson Macedo, who had climbed as high as third, slipping to tenth.

The World Wide Technology Raceway Flip Count made it to seven, with all drivers uninjured.

The 35th annual Lucas Oil Chili Bowl Nationals presented by General Tire continues on Tuesday, January 12, 2021, with Warren CAT Qualifying Night and the Vacuworx Invitational Race of Champions (VIROC). The River Spirit Expo Center opens at 9:00 A.M. with Hot Laps at 4:00 P.M. and Racing at 5:00 P.M. (CT). Limited reserved seat tickets can be purchased at the event office. Pit Passes will also be limited to the General Public.