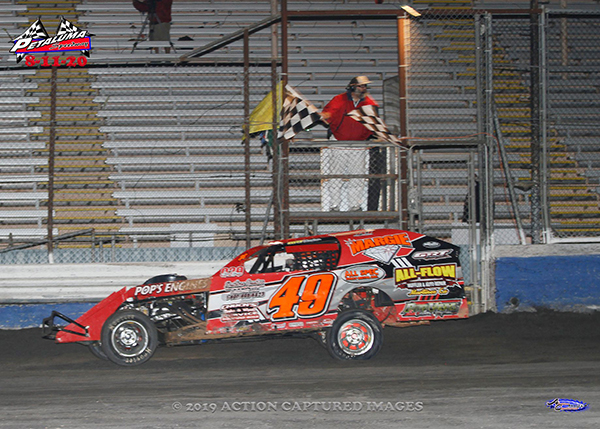 Troy Foulger, in the Bill Bowers, owned machine, took possession of the coveted top spot on the opening start of the IMCA Modified main.

Three total stoppages occurred during the whole feature which brought about a lot of green flag action. Lapped traffic did become a factor but Foulger mastered all obstacles. The Oakley driver went unchallenged en route to his first career California Modified Speedweek victory. It is his fifth overall win of 2020 with his last win coming at Antioch Speedway on July 25th.

Winton’s Paul Stone once again charged out of one of the B Mains, started dead last, and rallied to a second-place result. Night one winner, Bobby Hogge of Salinas, placed third while fourth went to Farmington, New Mexico standout Zane DeVilbiss.

Vacaville veteran Paul Gugliomoni was fifth via one of the consolation features. Just like the night before there were four B Mains earlier in the program. The winners were Paul Gugliomoni, Rohnert Park pilot Jeff Faulkner, Bobby Motts Jr. from San Pablo, and Bakersfield’s Robby Sawyer.

In the IMCA Sport Mod main event, Garrett Jernagan picked up from where left off from the previous evening. This time the Bakersfield driver seized the lead on the initial start.

The race had five stoppages which brought about many restarts.

Jernagan mastered all the restarts and the cautions were spaced about so evenly it practically took lap traffic out of the equation.

With just a few laps to go Garrett faced lap traffic for the first time but the final caution would wave giving him an open race track to work with. On the ensuing restart, Garrett Jernagan motored away to win his second straight California Speedweek victory and his third overall triumph of the entire year.

The third round of the 2020 California Modified Speedweek presented by Hoppes Motorsports heads to Antioch Speedway on Wednesday, August 12th.

All races of the 2020 Speedweek will have lap to lap coverage courtesy of FloRacing. For more information be sure to visit the California Modified Speedweek Facebook page.