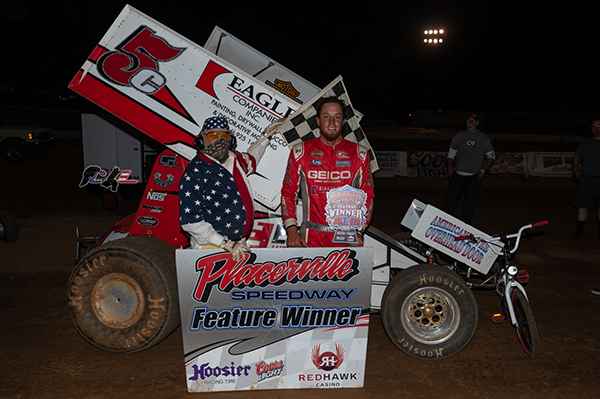 (July 5, 2020 from Placerville PR) – Continuing the long-standing tradition of Independence Day racing at the Placerville Speedway, the annual Fourth of July Spectacular rendered its fair share of thrills last night, which was capped off with a first-time winner in the form of Roseville, California’s Colby Copeland.

The 28-year-old driver had begun the season by earning three consecutive runner up finishes and charged to a scintillating victory late in the race on Saturday, marking his first career triumph with the Thompson’s Family of Dealerships Winged 360 Sprint Cars. Sharing victory lane with Copeland at the Fourth of July event were Dan Brown Jr. with the Ltd. Late Models, John Ewing with the Pure Stocks and Mike Miller in the Mini Truck division.

The Winged 360 Sprint Car feature came to the line with Hanford’s Mitchell Faccinto and Fair Oaks’ Justin Bradway sharing the front row. At the waving of the green flag Faccinto pulled out to the lead with Fremont’s Shane Golobic battling with Bradway for the runner up position. Early on it was apparent that the track surface was tuned up to perfection following a bit of prep prior to the A-main. A caution on lap six slowed things down but when going back green the action clicked off non-stop till the checkered flag.

Faccinto held command out front over Golobic, Copeland and eventually brother Michael Faccinto, who had carved his way forward from the fifth row. The slicked off surface lent itself to slide jobs and tremendous racing all throughout the field. As the laps wound down Copeland solidified the second spot and then executed a picture-perfect slider to grab the lead from Faccinto with just a few circuits remaining. Right after that Golobic followed suit and sliced his way to P2, before stalking the leaders’ tail tank.

In a role of reversals from the previous week, it was Golobic this time who gave it one final shot on the last lap. Copeland hit his marks though and crossed under the checkered flag to record the victory. He earned an extra $500 for the win courtesy of Absolute Auto Glass and took home the Slide Job City “Slide Job of the Night” worth an additional $50. Golobic, Michael Faccinto, Redding’s Chase Majdic and Mitchell Faccinto completed the top-five. Majdic should be commended for an impressive night that also saw him set fast time in his heat race group.

Rounding out the top-10 in the 30-lap finale were Modesto’s Tony Gualda, Roseville’s Sean Becker, Templeton’s Kaleb Montgomery, Lincoln’s Blake Carrick and Auburn’s Andy Forsberg. The $200 Hard Charger Award courtesy of Bullet Impressions and OneFastTee.com went to Placerville’s Shane Hopkins, who drove from 24th to 15th in the feature. A strong field of 38 cars signed into the pit area on Saturday night. The Winged 360 Sprint Cars will return to Placerville for the annual Mark Forni Classic on July 18th.

The Ltd. Late Model main event saw Lincoln’s Dan Brown Jr. race to his 12th career victory in the division at Placerville Speedway. Early on he held off the challenges of Tom Tilford and then had his way with things out front. Reigning track champion Ray Trimble of Auburn did close the gap however and kept the leader honest over the closing stages. Diamond Springs driver Dan Jinkerson also showed speed in the feature and climbed to third as the race wound down.

Up front Brown never faltered and crossed the stripe by 0.564 seconds ahead of Trimble for the victory. It has been a solid season for Brown and the Ahart team, who now have three wins total in 2020. Jinkerson, Matt Davis and Jay Norton rounded out the top-five in the main event. It was a clean sweep for the night by Brown, who also picked off the lone heat race held.

In the 20-lap feature for the Pure Stocks it was the “ATM Guy” John Ewing who parked it in victory lane for the second straight season at the Fourth of July Spectacular. The main event was a good one with several movers and shakers during the contest. With Ewing having his way up front Diamond Springs’ Kevin Jinkerson battled his way through the field after having to pit early on.
Jinkerson, Zach Lindgren and Nick Baldwin were fun to watch racing high and low on the quarter-mile bullring. Ewing held strong in the lead and picked up his fourth career Pure Stock win at the speedway. Jinkerson, Lindgren, Baldwin and last years Mini Truck champ Ryan Murphy completed the top-five. Heat races were claimed by Clarence Holbrook and Jinkerson.

The Mini Trucks provided some thrills and spills during their 20-lap main event, but it all happened behind Mike Miller, who dominated the contest to bring home the victory. Miller’s official margin of victory read as 3.833 seconds over Kevin Tremblay. Jason Murphy, Brian Tremblay and Howard Miller ran third through fifth respectively. Mike Miller also captured the one and only heat race held during the evening for the truckers.

Full results from the Fourth of July can be viewed at https://speedhive.mylaps.com/Events/1777836?fbclid=IwAR2rKQdojHZWW70oS8HMKH24-TvbiNz83TgXIYPJo5FKkumONqauAq4oE2o