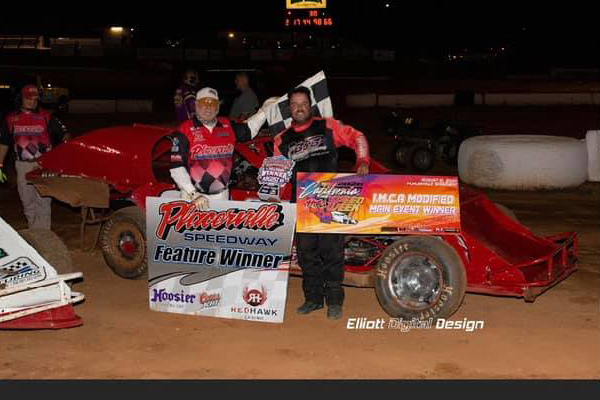 (August 11, 2020 from Stephanie Deatherage) – History was made on Monday, August 10th at Placerville Speedway as it had the honor of opening the first-ever California Modified Speedweek presented by Hoppes Motorsports. The historic ¼-mile clay oval attracted fifty-one IMCA Modifieds and thirty-six IMCA Sport Mods for the mid-week bout. It was the first appearance at Placerville for both the Modifieds and Sport Mods since April of 2019. Photo by Steve Elliott

Come main event time in the IMCA Modifieds, inside polesitter Bobby Hogge struck first on the opening lap to beat the field to the wire. A couple of consecutive cautions kept the field bunched up preventing the Salinas standout from developing a large lead. On the restart, Hogge would have his hands full with a hard-charging Danny Wagner.

Wagner, of Bay Point, slipped past Hogge on lap six only to lose the race lead on the following trip past the flag stand. It would be Hogge reclaiming the first place and he would build a decent interval on the long green flag runs. Around the halfway mark Shane DeVolder would give loads of pressure on the leader and eventually took over the top position on the twenty-first circuit.

DeVolder, of Pacifica, would lose the lead on lap twenty-two as he went over the cushion in the final sets of turns. It allowed Hogge once again to regain the top spot. A late-race caution would bring up an incredibly important restart.

Bobby Hogge would master the field when they returned to green and cruised around in the final eight circuits of the feature to the checkered flag. Hogge added to his illustrious career the honor of being the IMCA Modified California Speedweek victor. It is Hogge’s fifth Modified win of 2020 and his first since July 12th at Merced Speedway. Bobby also won the Limited Late Model feature earlier in the evening.

Martinez’s Nick DeCarlo hit the finishing stripe in the second-place position while behind him in third would be Shane DeVolder. Robby Sawyer, from Bakersfield, got fourth while Winton veteran Paul Stone, via the B Main, placed fifth. Four B Mains were run earlier in the program. The four winners were Oakley’s Troy Foulger, in the Bill Bowers owned entry, Rohnert Park racer Jeff Faulkner, Darrell Hughes II from Manteca, and Paul Stone.

In the IMCA Sport Mods, it was Jason Bannister who was the car to beat. The Bakersfield driver took possession of the coveted top spot on the opening start. Bannister built a comfortable lead but hit some heavy lapped traffic just past the halfway point. On lap eighteen, fellow Bakersfield racer, Garrett Jernagan stormed around the outside of Bannister to take over the lead. A lap nineteen red flag incident set things up to where Jernagan would have open racetrack for a late restart.

On the ensuing restart Garrett Jernagan, who started seventh in the lineup, pulled away and went unchallenged. Jernagan would etch his name in history as the first-ever Sport Mod California Speedweek winner. It is the second victory of the season for Garrett as he won at Bakersfield Speedway back in early March.

Jason Bannister was a respectable second over third finishing K.C. Keller, of Tracy. The rest of the top five would be comprised of Yuba City veteran Brian Cooper and Andrew Peckham, from Grass Valley, in fourth and fifth. The two consolation features earlier in the program were won by Yuba City’s Timothy Allerdings and Chuck Weir, of Merced.