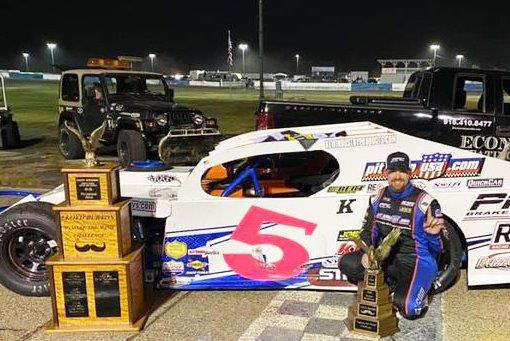 (October 5, 2020 from North State PR) – With only 10 laps to go, Kyle Tellstrom of Ukiah passed leader Charlie Collins of Upper Lake in lapped traffic and drove the final rounds to pick up his second victory of the season in the North State Modified Series (NSMS), presented by Protect the Harvest, at Shasta Speedway Saturday night. Defending NSMS champion Scott Winters of Tracy, who was dogging Tellstrom all the way to the checkers, finished second with Collins third and 3-time NSMS champion Darrin Knight of Kelseyville fourth. This was the second consecutive Shasta Speedway Lloyd Burton Against the Wind Modified Challenge for Tellstrom.

A 10-lap qualifying heat, sponsored by Economy Heating and Air was run with the fastest ten cars inverted to determine the starting grid for the 60 lap feature. Randy Houston led every lap to win the qualifier with Collins second, guaranteeing them both a front-row starting spot. Knight finished second in the qualifier followed by Ian Elliott, Tellstrom, fast qualifier (16.250) Winters, Simi Tour, Mike Sullivan, Cameron Austin and Darrin Sullivan.

At the drop of the green flag in the feature Houston powered into the lead with Collins 2nd, Knight third and Elliot fourth. Both Tellstrom and Winters drove under Elliott on lap five just before Keith Bloom stalled on the front stretch with a flat tire. The yellow flag was displayed, Bloom pitted, changed the tire and returned at the back of the field.

The double-file restart saw Houston and Collins side-by-side for two laps before Houston reclaimed the number one spot. Five rounds later the race was slowed again when chunks of asphalt peeled out of the cracks in the race track. One of them hit the front of Elliott’s car, puncturing his radiator. Elliot pitted for repairs but the damage was too great and he had to retire from action.

This time Collins forged ahead on the restart and pulled away from the pack. Houston, Tellstrom and Knight rode nose-to-tail as Darrin Sullivan and making an outside challenge on Winters. Winters finally prevailed, and both Winters and Austin inched by Sullivan by lap 20.

Cody Braund dropped out on lap 33 as the 3 leaders were playing bumper cars trying to upset their fellow competitors. Lap 36 saw Winters dive under Knight for fourth and the following round Tellstrom swapped places with Houston.

Winters began pressuring Houston until Houston’s car finally pushed up the track enough for Winters to poke his nose in the opening and take over third on lap 41.

Collins kept flawlessly driving around lapped traffic until the leaders caught two back-runners racing side-by-side. Collins choose one lane and Tellstrom took the other, and when traffic cleared Tellstrom was out in front. Winters followed Tellstrom’s line and moved into second, dropping Collins to third.

The final yellow came out on lap 54 when Houston was attempting an inside pass on Collins, drove off the track into the infield, and when he returned, dropped grass and dirt on the track the entire length of the back-stretch.

Economy Heating and Air donated $100 to every driver who ran the Qualifying race. Mort Houston and Simi Tour’s Great American Seed Company donated to the main event purse making this the richest event in the history of the North State Modified Series with $2000 going to Tellstrom for his win and a minimum of $400 to take the green flag.

Nowlin collected $100 for his win in the Lucas Oil Dash for Cash and Keith Bloom received $50 for finishing second. The $100 Jason Belveal Random Act of Kindness Awards were presented to Austin and Elliott. DeRosier earned the Naake Suspension Hard Charger award for passing the most cars. The $2500 Lucas Oil Tow Money was shared by the top 15 points contenders.

The final race of 2020 for the series will be the Bob Lehman Classic at Stockton 99 Speedway on October 24. Economy Heating and Air has added a $2000 bonus to the winner of this event, bringing the front money to $3000. Another $1000 from the Great American Seed Company will be distributed to the other competitors.