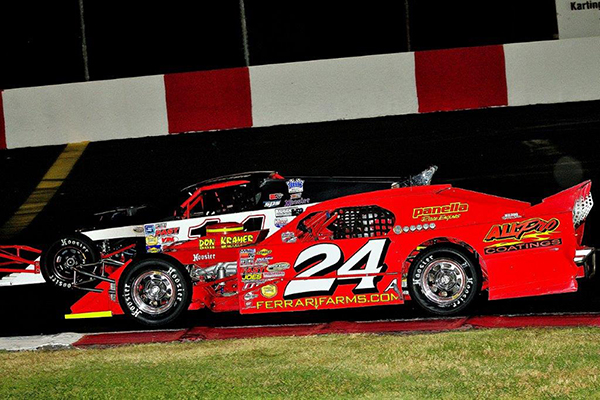 MADERA, CALIF. (August 4, 2021) – Round two of the MAVTV-televised Mission Modified series is in action this Saturday night at Madera Speedway, taking on the North State Modifieds in a 60-lap contest at the fastest one-third mile in the west. Two-time Madera Speedway champion Scott Winters of Tracy leads the North State standings as the best in the west get ready for a night of ground-pounding excitement.  The three-race Mission Modifieds MAVTV series concludes on October 16 during the Turkey Triple Open. Photo by Top Dawg Photos

Ukiah’s Kyle Tellstrom has traded blows back-and-forth with Winters throughout the 2021 North State Modifieds campaign. The battle of former series champions has seen Tellstrom win three times to Winters two victories, including Tellstrom winning the battle on May 8 at Madera. A strong contingent of 602 crate engine cars are expected in compete as they race for the Economy Heating & Air bonus.

Terry Deal of Economy Heating and Air has once again added to the purse and will pay the top three finishing 602 crate engine modified drivers a bonus of $750, $500 and $250 over and above their regular payout.  The Lucas Oil Tow Money bonus has been expanded to all drivers taking the green flag.  Plus Economy Heating & Air is giving the top ten finishing drivers not in the NSMS points another $100 bonus.

The 60-lap affair pays $1,000 to the winner but Economy Heating & Air will also offer an additional $1000 if any previous North State Modified or Twisted Tea Madera Modified champion or Madera race winner can take the checkered flag ahead of Tellstrom. The list of eligible drivers includes Winters and Sacramento’s Jason Philpot who led the crate engine cars in May with a fifth place overall finish.

Action gets underway on Friday with practice from 5pm until 8:00pm with pit gates opening at 3pm. On Saturday, pit gates open at 11:30am with practice at 1:30pm. Qualifying hits the track at 3:35 followed by heat races. Short Track TV goes live at 5:40pm with the Modifieds Lucas Oil Dash set to race. Six main events of racing will follow!