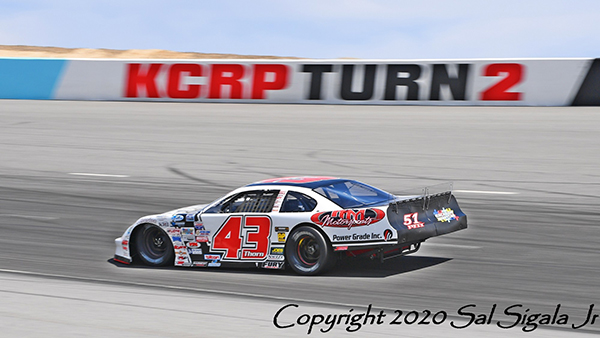 Throwback Weekend: The SPEARS Southwest Tour Series will feature a “throwback” themed weekend. Drivers and teams are encouraged to replicate paint schemes from the past, with the best design receiving a set of tires from Hoosier Tire West. A 20” x 30” framed photograph of the winning entry will also be awarded, courtesy of Sal Sigala Jr.

Repeat: Linny White will look to repeat his victory in last year’s October Classic, over the then 31-car entry. White will attempt to become only the third driver, in the Southwest Tour era, to score back-to-back victories. Mike Chase and David Gilliland are currently the only drivers to do so. Chase was able to capture three in-a-row.

Strong Field: 28 Super Late Models are entered for this weekend’s action. With Covid-19 preventing fans from attending events, it is the second highest car count of the season, behind the All-Star Showdown at Irwindale Speedway.

Rookie Battle: Six rookies are entered in this weekend’s action. Dean Thompson leads the Rookie-of-the-Year battle over Joey Iest, Buddy Shepherd, Jonathan Mawhinney with Brandon Farrington rounding out the top-five. Mawhinney is the only top-five rookie not in attendance. Eric Meisner and Mark Neff will make their first starts of the season, with Meisner making his first career start.

Series Dominator: Derek Thorn has had a dominant 2020 season thus far in the Spears SRL Southwest Tour Series. He has won five of the six events, leading 573 laps thus far. He has already established a new record for money won during a season, having taken home $49,425 thus far. His career mark passed $300,000 at the last event at All American Speedway. Thorn heads to his home track, where he has won eight SRL championship events, as well as a Winter Showdown victory. He won the October Classic in 2018, and finished third in 2019.

Historic Start: Carlos Vieira will make his 100th career start in the series. He will be only the third driver in series history to reach the century mark. Vieira’s first start was at Irwindale Speedway on April 26, 2008.

“It’s hard to believe that this will be my 100th start” Vieira explained. “It’s even harder to believe that I am still looking for my first win in this series. I have won Late Model and Super Late Model races, but I have not been able to get it done in this series yet. We have come close many times, but luck has not been on my side in those situations. Either way, I have been having a blast. Besides having fun, like I talk about in my new book “Knockin’ Doorz Down”, racing has been good for me. It helps keep me out of trouble, and focused on the important things in life. Wins or no wins, I keep coming back because it’s something that I need and want to do for myself.”

Returning Home: Preston Peltier grew up in Frazier Park, CA, just 45 miles from Bakersfield, the home of Mesa Marin Raceway and the October Classic for so many years. Peltier didn’t have the opportunity to compete in the event, but remembered watching from the grandstands. This year he will get the opportunity to make that first start, in his Sigma Performance Services Super Late Model.

“I used to watch the October Classic when I was a kid at Mesa Marin, so getting to race in it for the first time is something I’m looking forward to”, Peltier stated. “I haven’t been in a car much this year, but we have been working hard behind the scenes and I’m hoping all that hard work pays off next weekend.”

Hollywood Holtz: “Hollywood” Dan Holtz will make his first SRL start of the 2020 season. The two-time Mesa Marin Super Late Model Track Champion endured a practice crash at the season opening All-Star Showdown at Irwindale Speedway, missing the feature event. The car was nearly destroyed, but his Super Late Model was rebuilt, and Holtz is ready to return. Holtz has been a fan of the ½-mile facilities on the “Tour”, and finished fifth in his last start at Kern County Raceway, after setting Fast Time.

Live Broadcast: The Low Budget TV cast will be at Kern County Raceway to provide live coverage of the “JM Environmental Wild West Shootout Round #3 Boogie Man 127 presented by KHI Management”. The PPV broadcast can be found at www.SpearsRacing.TV.

Busy Weekend: Cale Kanke will return to the series for the October Classic. But before his return, Kanke will be racing his Dirt Modified at Merced Speedway (CA) on Friday and Saturday. Kanke will be in his RPM Motorsports Super Late Model for Sunday’s feature event, making for a hectic, but fun weekend.