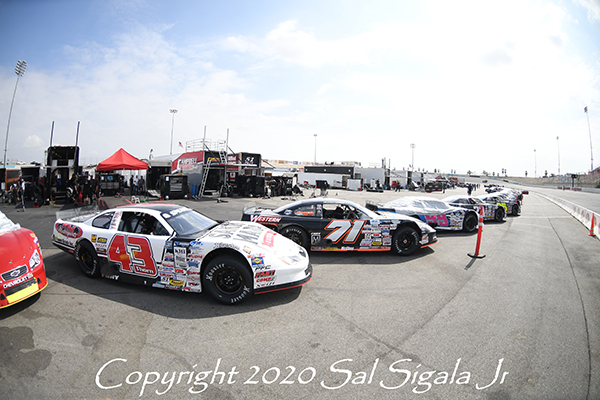 (December 17, 2020 from Kevin Peters) – Event: The “FAST 110 presented by COMP Cams” is the final event of the SPEARS SRL Southwest Tour Series 20th season. The ninth championship event of the season was added after Covid-19 restrictions wiped out a large portion of the first half of the schedule. The event was originally set to take place at Irwindale Speedway (CA) on December 19th but was moved to Kern County Raceway (CA), due to local restrictions in Los Angeles County. $5,000 will go to the winner of this weekend’s event. Photo by Sal Sigala, JR.

Resilient Teams: Despite the pandemic, and a large portion of the series schedule showing revisions, the “FAST 110 presented by COMP Cams” shows 25 Super Late Models on the pre-entry. For the season, the series will average 25.8 cars per event, if all 25 teams attend. That number is fourth best on the all-time list for championship events. This is despite all the schedule changes and Covid-19 restrictions.

Monumental Start: Keith Spangler is scheduled to make his 100th start in his SPEARS Southwest Tour Series career. Spangler will be the fourth driver to reach the century mark this season, after Jacob Gomes was the first at the season opener. Spangler came up in the NASCAR Southwest Tour Series, where he had 126 starts. Spangler first start in the SRL was in 2006 at Shasta Speedway, where he finished third. Despite having multiple runner-up finishes, he is still looking for his first series win. The 100 starts are something he would gladly trade for a SRL victory.

“To get 100 starts is a good accomplishment, but to me it means that I have had 100 starts and haven’t won”, Spangler noted. “I have been close a few times, but to not be able to do it makes it one of my bucket list items to do before hanging up my driver’s shoes. To get an SRL win is on the top of my list. I would give away all of my 100 starts to get a SRL win. I would do it in a second.”

Gomes Returns: Jacob Gomes will return to the series after missing his first event since he started participating in the SRL in 2009. That streak encompassed 106 consecutive starts for the 2009 NASCAR Advanced Auto Parts Weekly Racing Series National Rookie-of-the-Year. Gomes missed the “Retro Customs Metals 137” at the Bullring at LVMS (NV) due to his best man status at a friend’s wedding. Gomes is anxious to get back behind the wheel of his Sunny Valley Smoked Meats, Dell’ Osso Family Farms Super Late Model. The 2015 series champion will begin work on another streak this weekend at Kern County Raceway.

“I’m excited to get back behind the wheel”, Gomes explained. “Missing that first race really sucked. I just told myself that I ain’t going anywhere, and I am going to be racing for a while, because that feeling wasn’t fun.”

White Returns: Linny White missed his first race in two seasons at the Bullring at LVMS, due to illness. He returns to a facility at which he swept both events in 2019, after his championship runner-up season. 2020 has not been as kind, at the half-mile oval. White could only manage a 10th at the May race, and crashed out of the October Classic, finishing 23rd. With teams missing events, due to various factors, White could finish as high as second, if current championship runner-up Carlos Vieira finishes last in a 25-car field.

Speaking of Vieira: Carlos Vieira is set to score his career best championship finish in Southwest Tour Series competition. Vieira holds down the championship runner-up position behind teammate Derek Thorn. Vieira has one top-five, and six top-10 finishes in eight 2020 events. He has completed all but two laps this year with zero DNF’s. Vieira’s best prior finish was third in 2018. His best career finish at Kern County Raceway was a second in 2016. He has three career top-five’s in 14 series starts at the facility.

Rookie-of-the-Year: Dean Thompson will be crowned the Rookie-of-the-Year (ROTY) after this weekend’s event. Thomson was the 2020 Irwindale Speedway Late Model Champion and will add the ROTY crown to his achievements. Thompson currently sits eighth in the overall series standings and has registered one top-five and two top-10’s.

Wood is Back: Jack Wood will make his first series start, since signing with GMS Racing to drive their ARCA Menards Pro Series car in 2021. Wood has three starts in SRL competition in 2020, scoring his first top-five effort with the series at the All-Star Showdown at Irwindale Speedway. Wood was third in the 2018 Rookie-of-the-Year standings and has 22 career SRL starts. His best effort at Kern County Raceway, in SRL competition, was an 11th in 2019. He scored a top-10 finish in the ARCA Menards Pro Series West at the October Classic, earlier this season.

First-timers: Three drivers will be making their first starts of the 2020 season, with two of them making their first career starts. Ryan Philpott will make his third career SRL start. Philpott participated in one event in both 2006 and 2018 and will make his first start at Kern County Raceway. Both Corey Neveau and Dylan Garner will make their series debut’s this weekend. Corey is the younger brother of series regular Kyle Neveau, who currently sits fourth in the championship standings. Dylan Garner has participated in the SRL’s S2 Division in 2014 and 2016, logging eight top-five and 10 top-10 finishes in his 13 starts. He was the NASCAR Advanced Auto Parts Weekly Racing Series State of California Championship Runner-up upon two occasions.

Three Times a Charm: Dylan Cappello will be back in the Scott Sanchez owned Super Late Model this weekend. It will be the third series start for the two-time SPEARS Modified Series Champion. Cappello finished In the runner-up position to Derek Thorn, at the last SRL event at the “Bullring” in November. Sanchez will once again be teamed up with Cappello, trying to improve on both of their performances this weekend. Sanchez sits second in career starts behind Jacob Gomes, with 105.

Rebound City: Buddy Shepherd will look to rebound from a nightmare weekend at the previous event at the “Bullring”. Shepherd struggled all weekend, failing to qualify into the “A”-Main at the “Bullring”. Shepherd lost a rear-end during the Last Chance Qualifying race, while in a transfer position, revealing what was most likely the culprit for their difficulties. Shepherd finished second in the Winter Showdown at Kern County Raceway in 2018, and was runner-up to Derek Thorn this past May at his hometrack.

Media: The “FAST 110 presented by COMP Cams” will be live streamed at www.SpearsRacing.TV on Saturday. MAVTV will broadcast the action at a date to be named later. The SRL Super Late Models will be joined by the SPEARS Modified Series as well as the Pro Late Models, which will be run under the series banner in 2021.