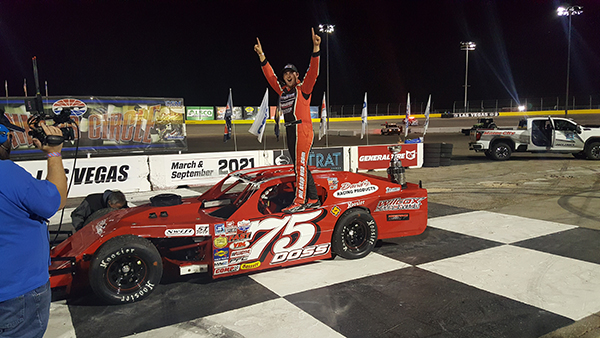 (November 23, 2020 by Kevin Peters) – Jeremy Doss has a reputation at the Bullring at Las Vegas Motor Speedway (NV). The driver from Upper Lake, CA knows where the payoff is, and that is Victory Lane. True to that reputation, Doss found himself in that exact location Saturday night in the “Optima Batteries 75 presented by FAST” for the SPEARS Modified Series. Doss repeated last year’s debut victory by defeating a 37-car entry, and taking home the $2,500 Winners Check. It was Doss’ fourth victory of the season, and allowed him to expand his one-point championship lead over “Fast” Eddie Secord to 15, with one event remaining.

“It feels good going into Irwindale (Speedway) with a points cushion”, Doss described. “We’re gonna put a 602 in it for the next race, and I think that will benefit us there and give us a good shot of coming out on top. A points cushion is always nice going into the last race, and I’m really looking forward to it.”

Shelby Strobel got the afternoon started by setting the “PFC Brakes Zero Drag Fast Time Award”. It was an improbable feat for the Meridian, ID driver, as the team lost a motor in the second practice session of the weekend. It was touch and go as to whether the team would compete this weekend, as Stroebel described.

“The motor developed a knock, out on the racetrack, and started to lose power. After tearing it halfway down, we found that it was in the bottom end and we couldn’t repair it. Chris Bray offered up his engine to us, and I really didn’t want to do it because if we blow his up, we gotta fix it too. He just said, “Don’t worry about it, we’ll work it out in the end.” We took it to his shop, and his guys, his lights, his floor and Tom Pfundstein of course, we all fixed it and put the other motor in last night until about 1:30 (am) in the morning. It made it to where we could race today and I’m really, really happy with our finish.”

The starting line-up featured a redraw of the fast eight qualifiers, and Eddie Secord made his bid for success by drawing the ace to start on the pole. Eric Rhead pulled the “two”, followed by Doss, Stroebel, Travis McCullough, Sam Jacks, Dylan Cappello, and Ian Elliott. The initial start found Secord pulling out to the lead, with Doss following in the preferred inside groove. A caution came out quickly, when a multicar incident found Nick O’Neal turned around after contact with Jim Coffey, with Ed Coffey also spinning to avoid the skirmish in Turns 3 and 4.

The restart found Doss lined up alongside Secord on the front row. Secord was able to pull ahead in the bottom groove, but Doss battled back, getting under Secord in Turn 1 on lap four, and completing the pass on Turns 3 & 4. Stroebel was able to get by Rhead for third and closed on the bumper of Secord for the runner-up position. It only took a couple of laps for Stroebel to get under Secord and take up pursuit of Doss for the lead. Lap seven saw Doug Carpenter around after contact from Jeff Longman. On resumption, Doss was able to pull out to a short lead with Cappello getting by Secord for third on lap 10. Meanwhile, Travis Thirkettle was moving forward from his 13th place starting position, vaulting into the top-five only a dozen laps into the event. He cleared Secord for fourth on lap 18 and took up the chase of Cappello for third, as Secord began to fall back.

Doss continued to lead, but as he approached lapped traffic on lap 23, Nick O’Neal was sent spinning in front of the leader after contact from Austin Stewart, amongst a group of drivers trying to stay on the lead lap. Justin Johnson was unable to avoid the spinning O’Neal and was also involved, ending his night. Doss was able to avoid contact, but it set up another restart, this time with Stroebel to his outside. Once again, Doss was able to pull away, as Thirkettle and Cappello battled for third. Four laps later, Thirkettle made his move under Cappello coming off Turn 4, taking the position.

As Thirkettle was moving up, championship runner-up Secord was falling back, with an ill-handling car. Sam Jacks moved under Secord to jump into the top-five on lap 33, with Wyatt King following a few laps later. Another caution on lap 38 slowed the action as Jeff Longman was sent spinning. The ensuing restart found new life for Secord, as he moved back into the top-five in the bottom line, with Cappello falling outside the top-five, a victim of the high-line. But it didn’t last long for Secord as Jacks, King and Cappello soon moved back by the struggling driver. A spin by Carpenter slowed the action once again on lap 47, to bunch up the field once more.

Another restart found Sam Jacks the victim this time, as King and Cappello both drove by on the inside to run fourth and fifth. Secord continued to struggle as he fell victim to Aubree Cristiani, who moved Secord back to eighth. Travis McCullough, Ian Elliott and Clint Shubert followed soon after, pushing Secord outside the top-10.

Meanwhile, Doss was on cruise control up front, as Cappello once again moved back into fourth, getting under Wyatt King just before a red for Ed Coffey, which stopped the action for the clean-up. Another restart found Doss pulling ahead of Stroebel, Thirkettle, Cappello and King, with Secord given new life once his tires cooled. At the checkered, Doss was able to pull away for the win, with the top-five remaining the same. Secord was able to recover to eighth, limiting the damage to his championship hopes. The second five at the finish consisted of Sam Jacks, Aubree Cristiani, Secord, Travis McCullough, and Ian Elliott.

For Doss, it was a big night at his best track. A $2,500 win, to go along with a big points night for the 2018 SPEARS SRL Southwest Tour Series Champion, was just what the doctor ordered. Despite qualifying second, Doss had a dominating car when it came to race conditions, and he was grateful for the effort put out by his team to make the car so good.

“We had a really good race car”, Doss asserted. “We didn’t really have good short-run speed, it was decent, but I knew we had a good race car, and it didn’t really fall off. I gotta thank the mad scientist, Duane Sharp, for giving me a great car. I also want to thank Eddie and Cory Wilcox for giving me the opportunity to drive their car. Thank you to Eddie Wilcox Jr., Dale Dodds and everyone who is a part of this race team for helping out this weekend. I’d also like to thank Peters Racing Engines, Pit Stop USA, Swift Springs, PFC Brakes, and everyone who is on-board with us this weekend.”

Stroebel was making his first SPEARS Modified start since this event in 2019. He had a great second place effort in his return, but needed just a little more on the short runs, to be able to compete with Doss for the win.

“Our car went tight, especially on the restarts, so the longer runs we were better”, Stroebel stated. “But by the time that the long runs came, he was already ahead by five or seven car lengths. I think I could keep the distance at that point, but myself and Travis (Thirkettle), and I think even Dylan Cappello were tight on those restarts for five to eight laps, and made it to where Jeremy just got away from us.”